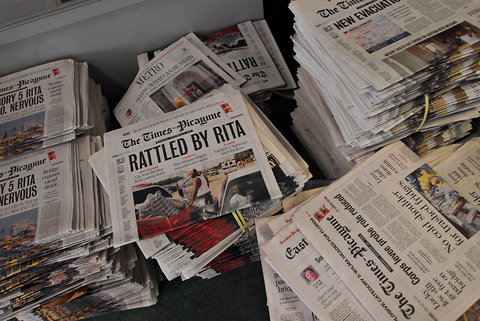 We have often seen this notion with the former – witness the post-Katrina revival of New Orleans right along with the New Orleans Saints’ ascension to a Superbowl Championship.

Newspapers are equally important as identity markers to the residents of the metro areas those papers serve.  In essence, newspapers provide the public identity for their readership.  Therefore, the Newhouse family is not only guilty of wreaking havoc on their employees’ lives with mass layoffs and shutdowns, but also guilty of public identity theft, slowly stealing away the chronicling soul of the city.

So important is that public identity to the New Orleans community that a letter was sent from an organization called the New Orleans Times Picayune Citizens’ Group urging Advance Publications (the Newhouse’s publishing company) to sell the newspaper rather than cut its production.  The group is comprised of more than 70 community organizations and business leaders including such luminaries as Archbishop Gregory Aymond, former New Orleans Saints quarterback Archie Manning, jazz artist Wynton Marsalis, Tulane University President Scott Cowen, Xavier University President Norman Francis, Loyola University President Kevin Wildes, restaurateur Ralph Brennan, and Saints and Hornets owner Tom Benson.  These are serious people; these are busy people; and I doubt they would lend their names to such a fight unless the fight was exceedingly important to them personally, just as though this were their own identity under attack.

As a result, the Newhouse family is witnessing firsthand how businesses often come under attack.  A company can only flourish with a strong business plan, clear goals, an attractive product or service and the endearment of its customers.  I would argue that the Newhouse family’s stealing of their customers’ public identity, or maiming it by cutting it to the bone, are not terms of endearment.

Now before you come at me with an “It’s their business; leave them alone” argument, let me be clear about something – I am a huge supporter of entrepreneurs and the business community.  I generally believe business leaders should be free to run their organizations as they see fit, so long as it’s legal and their customers are satisfied.  Therein lies the rub.  The natives are restless; the customers are anything but satisfied.

In my view the Newhouse family’s version of identity theft, the virtual shuttering of the Picayune, is a critical exception to this generality for three reasons:

1) The New Orleans revival post-Katrina continues to progress and excite, so we need an invested, local voice to articulate those gains on a daily basis.

Tulane President Cowan may have said it best: “In the next several years, the city will host an unprecedented amount of national and international visitors and media, including the NFL Super Bowl, NCAA Women’s Final Four, NBA All-Star game, commemoration of the 10th anniversary of Hurricane Katrina and celebration of the city’s 300th birthday. These events, along with the downtown opening of two new $1 billion-plus hospitals, deserve a more robust approach to news delivery.”

2) The newspaper business is tough these days, but no one forced the Newhouses into New Orleans, and if they cannot make it work, someone else can.

The reasons for shutting down the paper have often been discussed as solely based on business principles, that revenues are down and that print media in the current economic environment is unsustainable.  But if that were really true, then how could theBaton Rouge Advocate agree to move into the market and begin actively interviewing current and former TP reporters and staff?  For starters it’s because the Manship family knows what they’re doing.  At a more macro level, the truth is that print media, at least for those organizations with savvy business leaders, has begun steadying itself even as advertising revenues fall further.

Take a look at this year’s annual news media report – The State of the News Media 2012.  The report is the work of the Pew Research Center’s Project for Excellence in Journalism, a nonpolitical, nonpartisan research institute funded by the Pew Charitable Trusts.  Yes, many of the numbers in the study paint a less than stellar picture of the industry and to be sure, much progress must still be made, but the “lead” for the newspaper portion of the report states the following: “The newspaper industry enters 2012 neither dying nor assured of a stable future. The industry has rallied around a story about itself – that year-by-year it is developing new digital products and new revenue streams to transition from dependence on print advertising.”  In other words the jury is still out on the newspaper industry, and any good business leader knows where there are challenges, there are also opportunities.

The Newhouse family has a long and storied history in the newspaper business, and they must know that basic business theory.  Indeed Britannica states the family “built the second largest publishing empire during the second half of the 20th Century,” andForbes Magazine in years past has had them ranked as high as 46th among privately-held American companies.  That track record indicates someone over there must know what they are doing, but in the case of the Picayune, it seems to me the Newhouses have chosen to cut and run rather than to focus on their customers by developing new products and revenue streams.

3) People want their newspaper, they want their identity, and they’ll shout from the rooftops until they get it.

Referring back to the Pew Research Center report, one will find a most glaring fact that I believe supports the notion of shared, public identity through a community’s newspaper: from 1980 – 2004, ad revenue rose steadily, but since then, that revenue has fallen precipitously.  Throughout that time, circulation remained relatively stable.  In other words people kept reading.  And people will keep on reading.  They want their hometown newspaper, and they want it every day.  It is too bad the Newhouse family couldn’t find a way to give New Orleans theirs.