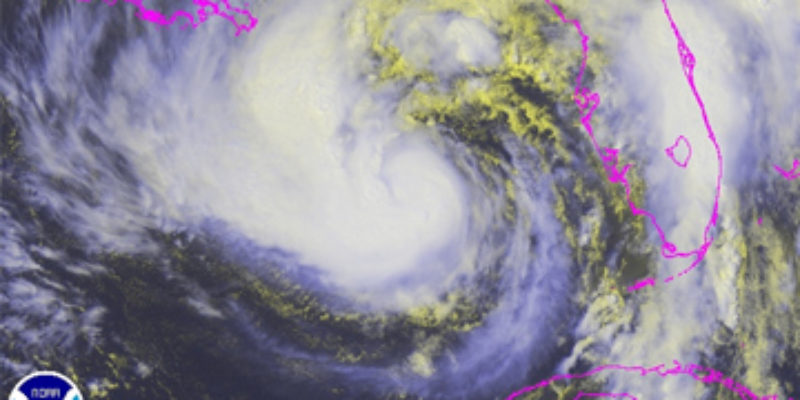 UPDATE #2: The latest advisory says the storm is 979 millibars, but the wind speed hasn’t changed – which is a function, so far, of dry air from the Gulf being sucked into the storm and preventing it from intensifying.

So far. But low pressure usually means intensification. And 979 millibars is usually a Cat 2 storm.

Watches and warnings ——————– changes with this advisory,

Summary of watches and warnings in effect,

A hurricane warning is in effect for, east of morgan city Louisiana to the Alabama-florida border, including metropolitan new orleans, lake pontchartrain, and lake maurepas

A hurricane watch is in effect for, intracoastal city to morgan city Louisiana

A tropical storm warning is in effect for, from the Alabama-florida border to the aucilla river intracoastal city to morgan city Louisiana

A tropical storm watch is in effect for, east of sabine pass to west of intracoastal city Louisiana

A hurricane warning means that hurricane conditions are expected somewhere within the warning area. Preparations to protect life and property should be rushed to completion.

A hurricane watch means that hurricane conditions are possible within the watch area.

Discussion and 48-hour outlook —————————— at 1000 pm cdt, 0300 utc, the center of tropical storm isaac was located near latitude 27.1 north, longitude 87.0 west. Isaac is moving toward the northwest near 10 mph, 17 km/h. This general motion with some decrease in forward speed is expected during the next day or two. On the forecast track, the center of isaac will move over the central gulf of mexico tonight and approach the coast of southeastern Louisiana and Mississippi Tuesday afternoon or tuesday night.

Maximum sustained winds are near 70 mph, 110 km/h, with higher gusts. Strengthening is forecast, and isaac is expected to become a hurricane tonight or early Tuesday, and continue to strengthen until landfall occurs along the northern gulf coast.

Tropical storm force winds extend outward up to 205 miles, 335 km from the center.

Hazards affecting land ———————- storm surge, the combination of a storm surge and the tide will cause normally dry areas near the coast to be flooded by rising waters. The water could reach the following depths above ground if the peak surge occurs at the time of high tide,

The deepest water will occur along the immediate coast in areas of onshore flow. Surge-related flooding depends on the relative timing of the surge and the tidal cycle, and can vary greatly over short distances. For information specific to your area, please see products issued by your local weather service office. Near the coast, the surge will be accompanied by large and dangerous waves.

And the updated track looks like it’s about the same, if maybe jogging ever-so-slightly to the east…

UPDATE: Some “good” news out of the White House…

The White House issued a release today which states that “the declaration builds on resources already deployed by FEMA and makes Federal funding available for certain emergency activities undertaken by the state to prepare for and respond to the storm.” However, the limited declaration does not provide for reimbursement of expenses that the state is taking to prepare for the storm.

Jindal’s letter is polite, but it more or less calls bulls**t on President Obama’s piecemeal declaration. In the event this thing does a lot of damage, we now have the stage set for a political “thing” to emerge from it…

I have received your approval of a limited federal declaration of emergency for Tropical Storm Isaac for the State of Louisiana. We appreciate your response to our request and your approval. However, the State’s original request for federal assistance dated August 26, 2012 included a request for reimbursement for all emergency protective measures. The federal declaration of emergency only provides for direct federal assistance.

In a release issued by the White House today, it said “the declaration builds on resources already deployed by FEMA and makes Federal funding available for certain emergency activities undertaken by the state to prepare for and respond to the storm.” Unfortunately, your limited declaration does not provide for reimbursement of expenses that the state is taking to prepare for the storm.

As of 5 p.m. Central time today, the National Weather Service forecasts this storm to strengthen to a Category 2 hurricane and squarely impact the State of Louisiana. The increased urgency of the situation necessitates that we re-emphasize the request for full federal assistance for the State.

The projected path of the storm has continued to shift westward and now threatens the entire State of Louisiana. The rapidity of the path’s westward movement has increased the potential impact of this storm from a slight chance of affecting southeastern Louisiana to now threatening the entire state. The speed with which this threat developed has necessitated extraordinary emergency protective measures at the State and local government level.

Since the State of Louisiana is faced with a rapidly developing situation that threatens a large percentage of our population, please consider the following developments as a supplement to the request submitted yesterday.

At this time 34 parishes have declared a state of emergency:

We request that you expand the designations to include all of these parishes. We expect more parishes to declare a state of emergency.

There are currently 9 areas covered by mandatory evacuation orders:

As of this morning, I have activated 4,126 Louisiana National Guardsmen, an emergency contract for over 300 commercial buses, and over 5,000 shelter spaces to respond to the wide ranging projected path of this storm, move our citizens out of harm’s way and provide them with shelter. The school districts in the path of the storm have cancelled school until this dangerous storm passes.

All of these actions are appropriate and necessary responses to the threat of this storm. While Tropical Storm Isaac has yet to strike the state, it has necessitated significant amounts of State and local government expenditures. The State’s expenditures for emergency protective measures are already approximately $8,000,000 and exceed the State of Louisiana’s threshold when making a request for a major disaster declaration.

Given the extraordinary developments of this storm and its approaching impact on the State of Louisiana, I ask that you exercise your discretion to approve the State’s pending request for all emergency protective measures. Further, I ask that you consider a cost-share adjustment to eliminate the State’s non-federal share of the costs for this event. When threatened with extraordinary disasters, states depend upon the availability of the full spectrum of assistance available under the Stafford Act.

Finally, a core responsibility of the federal government is to protect the lives and property of its citizens when threatened. This disaster declaration will help ensure that we best protect life and property in our state.

ORIGINAL: Remember that scene in Independence Day when the military/national security guys in the war room recognize that big object approaching Earth isn’t a meteor?

“Because it’s slowing down, sir.”

Well, we give you our Wheel In The Sky out in the Gulf. Because it’s slowing down, too.

10 mph isn’t exactly a crawl, but it’s getting to be on the slow side. And the slower a storm moves, the more punishment it will dish out.

The track hasn’t changed much…

Meanwhile, FEMA says the levees around New Orleans should do OK. They’d better, particularly considering the billions spent on them since the last monster that came ashore.

Federal Emergency Management Agency officials said Monday that the updated levees around New Orleans are equipped to handle storms stronger than Isaac. Levee failures led to the catastrophic flooding in the area after Katrina.

“It’s a much more robust system than what it was when Katrina came ashore,” said FEMA Administrator Craig Fugate in a conference call with reporters.

They’re expecting storm surge on the Mississippi Gulf Coast about six feet, which would make the storm a lot less of a water event than Katrina was. Of course, the current track makes the Coast largely a sideshow seeing as though it looks like it’ll land west of New Orleans.

What the storm surge will be in Barataria and Timbalier Bays is a different question altogether, and six feet might be a day at the beach. This thing could wipe out half Louisiana’s nutria population in one fell swoop – either that, or fill that sinkhole in Assumption Parish with swamp rats.

Storm surge observations from Isaac
This morning, as Isaac’s counter-clockwise winds brought offshore winds to the Tampa/St. Petersburg area, ocean waters fell two feet along the coast. This afternoon, winds have shifted to blow onshore, and a two foot storm surge has been observed at Naples, Fort Meyers, and St. Petersburg on the west coast of Florida. Water levels have also begun to rise along the coast of Louisiana, with a storm surge of 1.5 feet already occurring at Shell Beach on the east side of New Orleans in Lake Borgne.

From that same article by Jeff Masters at Weather Underground, something hopeful…

The closer Isaac gets to landfall without having formed an eye, the better it is for intensity at landfall. Isaac has strengthened only modestly in the past 24 hours, and is still struggling with a less-than-conducive atmospheric environment. The HWRF remains on the high end of the intensity spectrum, suggesting Isaac will be a weak category 2 upon landfall. Other models suggest it will be a strong category 1, but the difference is splitting hairs. The National Hurricane Center’s official forecast is for Isaac to continue strengthening over the next day, reaching category 2 at landfall.

This is at least reason to hope we won’t get clobbered by that thing out there.

Interested in more national news? We've got you covered! See More National News
Previous Article A PIECE OF ADVICE: Taking 26 Pictures Of A Grizzly Bear From 40 Yards Away Or Less Will Ultimately Become A Problem
Next Article FAILURE: Even With $7,000 Federal Purchase Subsidy, GM Is Shutting Chevy Volt Production Down For Lack Of Demand