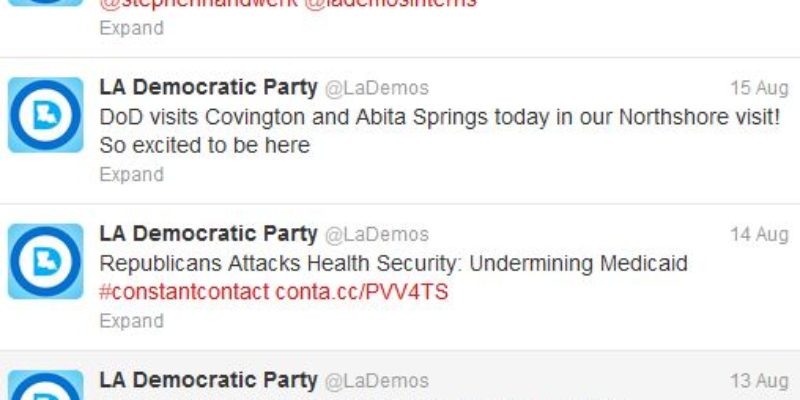 That might sound like a harsh headline, but with qualifying proceeding for this fall’s election cycle it’s not an invalid statement to make based on the performance of that party’s leadership.

Because if you accept the definition of a political party as being an organization which presents candidates for elected office, so far it looks like the Democrats in this state, under the leadership of Sen. Karen Carter Peterson, are more interested in sitting around on their rear ends than doing what political parties do.

See any Democrats outside of Cedric Richmond? We don’t. We see lots of Republicans – there’s even one running against Cedric Richmond in the state’s Dollar Bill Jefferson Memorial minority set-aside district – and we even see Libertarians running in half the state’s districts.

They’ve got until close of business on Friday to present candidates, but the chances look pretty minimal that anybody serious – if anybody at all – will show up to the starting gate.

There isn’t much of a change at the Public Service Commission,  which is the other non-judicial statewide race set for November…

Same three candidates we’ve already known about. The Dems don’t appear to be contesting that race either.

We’ve said this several times, but if you’re not going to participate in the political process by running candidates, regardless of whether they actually have a chance to win, then you don’t deserve to be taken seriously.

The Libertarians, who have at most a few thousand registered voters on hand, are a lot more serious about running candidates and participating in the electoral process than the Democrats are. They deserve credit for fighting the good fight.

As for Peterson and her crowd, they’re not running candidates. They’re doing other things. Like dancing around with Cory Booker…

That was at their Jackson Jefferson Dinner in New Orleans, which is their big fundraiser.

What they’re raising money for is a good question. 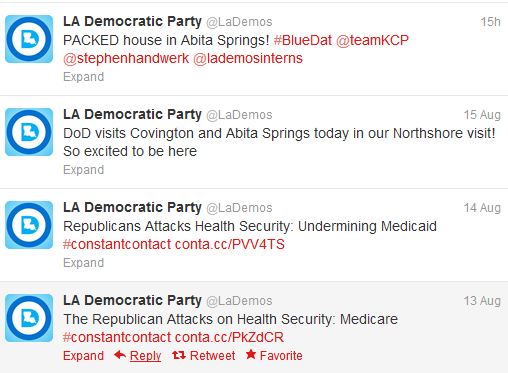 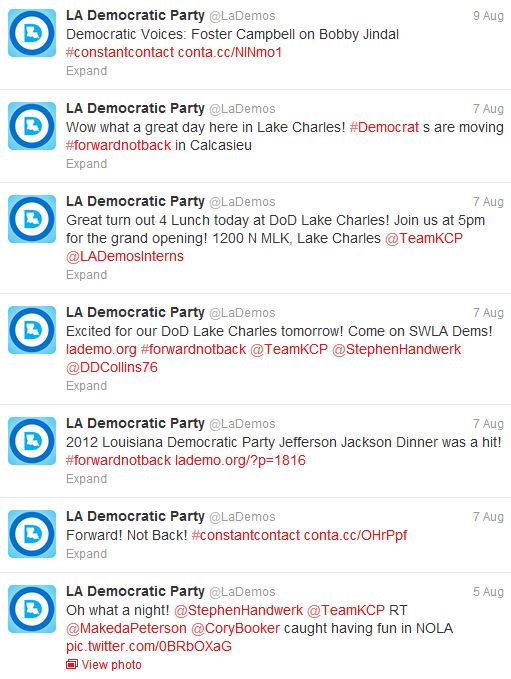 DoD stands for “Day Of The Democrats,” which is a series of rallies they’re putting on – they’re in Houma and Thibodaux today. Last week in Lake Charles they opened a campaign office as one of these events, and had nothing to say about running anybody for office.

Instead, they had lots of whining to do about Gov. Bobby Jindal’s policies. You remember Jindal – he’s the guy who ran for re-election last year and the only candidate the Democrats could find to oppose him was a middle-school teacher from Haynesville with $3,000 in her campaign account? Yeah, that guy.

“It affects our universities, because they’re no longer going to have places for their nurses and doctors to practice and actually learn their skills, so that’s going to hurt us there,” said Stephen Handwerk, executive director of the Louisiana Democratic Party. “We’re talking about a domino effect that is going to haunt us for decades to come, and this governor (Bobby Jindal) can’t even be bothered with it because again he’s traveling out of state.”

Handwerk took particular exception to Jindal’s decision to not expand Medicaid in the state.

“Jindal has made the conscious decision that his personal future is more important than the lives of more than 300,000 Louisiana citizens who would be covered by the expansion of Medicaid,” Handwerk said.

“We are holding (Jindal) accountable for that position,” said Diana Hamilton, the new chairperson of the Democrats’ local chapter.

Handwerk said the expansion of Medicaid in the state would cover “people who are working for a living, oftentimes more than one job, but cannot afford insurance.”

Handwerk also said Jindal has been “MIA” while campaigning and criticized the education reform passed during the spring session.

“We as a party really have a basic and simple question: how does taking money out of public schools and putting them into private schools help solve the problem of our public schools?” Handwerk said.

“I haven’t heard anyone that’s been able to answer that question. It simply defies logic and proceeding to blame teachers for all of the ills that affect our school system is certainly irresponsible but seems to have a callous disregard for the facts at hand.”

Holding Jindal accountable? They won’t even run somebody for the PSC!

It’s easy enough to shoot down the policy arguments being made here; they’re fatuous and childish. But when you’re not even participating in the electoral process, what’s the point? These are not serious people.

Increasingly, the Libertarians are. Maybe they’ll replace the Democrats as Louisiana’s other major political party. With Peterson and her team running the show for the Dems, it’s only a matter of time.