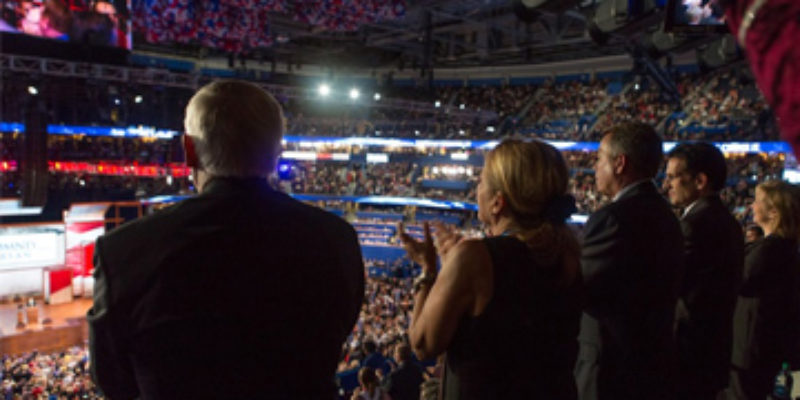 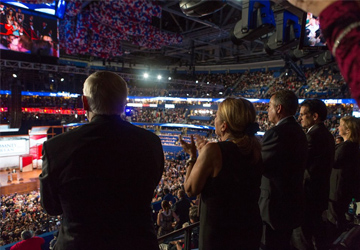 The roster of speakers was full, and the performances were strong. At least in the case of the final three speakers – and a few prior to them.

We won’t go into any particular detail on the speeches by John McCain, who it seems would gladly invade the Bahamas if he had the power based on his speeches, or Mitch McConnell, who it must be surmised is actually made of wood given the ligniform quality of his oratory.

Rob Portman and John Thune were better, if not particularly electric. Rand Paul, on the other hand, is made of more dynamic stuff – Paul appears far more interested in building coalitions and consensus than his father, and it’s clear he’s about something more than building a mailing list. It wasn’t just his father’s supporters who were excited about his performance.

Tim Pawlenty’s speech? Well, it was Pawlenty. Nice guy, he’ll make a decent Labor Secretary or Energy Secretary or something, but firing up a crowd?

Condi Rice was good. She had a line that on another night might have been the line of the night: “there is no other country…that can do to us what we can do to ourselves.” The speech was a little too much of a defense of Bush foreign policy, which frankly Americans are weary with, and when anybody from the Bush administration references “compassionate conservatism” we want to break out in hives. That said, though, she was passionate, unapologetic and for the most part correct. And surprisingly, she was best on domestic policy and in fact devastating when she talked about education being the civil rights battle of our day…

Lots of people say that one of the best speeches of the entire convention was the one given by Susana Martinez, the governor of New Mexico – who, after a bit of biography, lit up the room with a stirring rebuke of the president’s policies and record…

And then it was time for Paul Ryan, who delivered a masterful, devastating, historic speech absolutely burying the Obama legacy – and particularly with young voters. The money line: “College graduates should not live out their 20’s in their childhood bedrooms staring up at fading Obama posters and wondering when they can move out and get going with life.” There may not be a more damning indictment of a sitting president – to his core – in the history of the Republic.

The Ryan speech, in three parts…

Brilliant. Game-changing. So good, in fact, that it’s possible Ryan might end up upstaging Mitt Romney if the latter doesn’t knock his speech out of the park tomorrow.

But setting a high bar for the nominee is what an ideal early-convention speech is supposed to do. That’s how you build a great convention.

And so far, that’s what this convention has been – sniping and lies from Democrat hacks in the old-line media like David Chalian notwithstanding.

Romney has a high standard to meet. He must deliver with passion, humor and humanity tomorrow. The voters must see him as the Alpha male, in-charge, warm, generous and rock-solid individual his surrogates have portrayed him as so far in this convention. He must present solutions, perhaps with specificity – he needs to tell the American people that he’ll shrink the size of government and then give examples of what might be left by the wayside. This entire convention has been about the GOP being willing to fight for real reform in Washington just like it has at the state level, and about the party being willing to take on those issues thought politically deadly and have an adult conversation about them; Romney has to take that courage and confidence to the podium and show that his will be a consequential, beneficial and redemptive presidency.

He needs to take the reputation he’s earned for being a success in everything he’s done and demonstrate to the American people why he has that reputation. What character traits has he developed within himself to get where he’s gotten? What’s his management style? What does he look for in those he surrounds himself with? And why – outside of policy and politics – should the American people conclude that whether they dislike Obama’s record and governance or not, Romney is a viable and beneficial alternative? That last question isn’t difficult to answer successfully, as it happens – Romney just needs to demonstrate strength and skill. He might do well to apologize for not being a natural politician; he might say that some of the daily back-and-forth and pursuing of the news cycle is difficult for him, contrary as it is to the values of successful management and leadership, and remark that one thing he’s had to learn in public life is the primacy of making people feel good about getting behind him; in private business it’s usually quite easy to rally like-minded members of an organization behind a direction dollars and sense easily dictate, but politics never seems to be so simple. And then he can say that his time pursuing political office over the last decade has shown him those differences have begun to melt away as it has become clear the dangerous path the country is on.

Romney has an opportunity to put this election away by satisfying those questions. It’s clear he has a quality team around him in this cycle; his surrogates at this convention have been quite good. And next week in Charlotte, the Democrats will trot out a collection of misfits, slouches, grouches, victims, parasites, whiners and demagogues such as has never been seen in the history of American politics; by comparison an optimistic, competent, inspiring and revealing Romney speech will clearly show the country what the right choice is.

He just can’t blow it. He shouldn’t blow it. The country can’t afford for him to blow it.