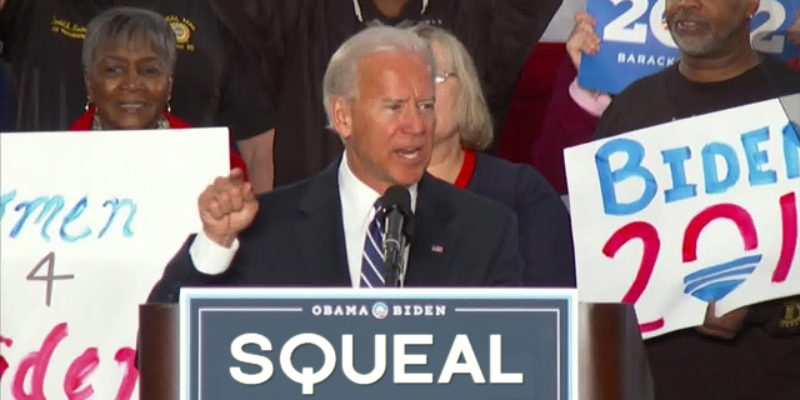 From the sound of it, they’re gonna have some freaks in Tampa next week.

No, I’m not talkin’ about all the Ron Paul people who’re gonna be there. Stop it.

I’m talkin’ about Joe Biden. Usually they lock him up at sundown, but next week? Who knows?

Vice President Joe Biden will be in Tampa during the Republican National Convention, a campaign official confirms.

“Next week, on Monday, August 27 and Tuesday, August 28, Vice President Joe Biden will travel to the Tampa area and other cities for campaign events,” an Obama campaign official tells THE WEEKLY STANDARD. “Additional details on the Vice President’s trip are forthcoming.”

Apparently, the word got out about this because the Secret Service guys were pretty loose-lipped about it. Buzzfeed had this…

Word of Biden’s visit apparently leaked when Secret Service agents were overheard discussing the trip on a flight full of Republicans en route to Tampa.

You get the impression the Secret Service guys don’t have a whole lot of love for Joe Dirt. Remember that story last week about the dude in Virginia who told Biden “Bite me” when he wanted to come to his bakery for a photo op? Secret Service came in and bought out half his store to thank him for givin’ the Veep the “business.”

And now they’re on a plane pretty much with a megaphone tellin’ the GOP “Get ready, because Vice President Foot-In-Mouth is comin’.”

Which means the people at the convention are gonna be busy comin’ up with ways to diss Biden. Can we offer some suggestions?

First, how about dressin’ up a few hunnert people as coal miners and have them follow Biden around. Remember this piece of dumbass? 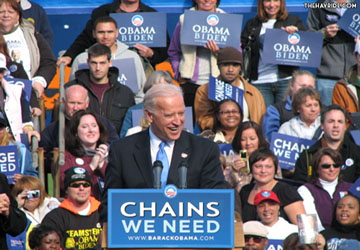 Or maybe the latest… 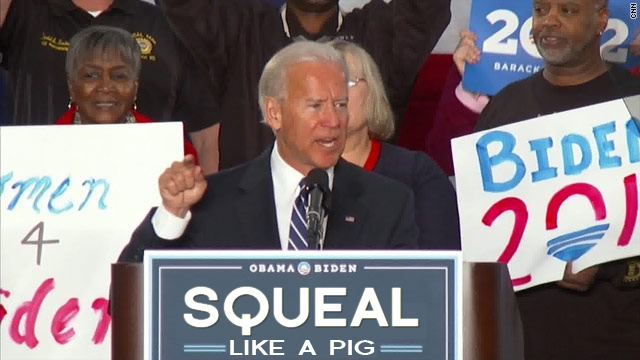 Certainly you can get a buncha people to squeal at him every time he says somethin’, right?

Biden’s not the only freak who wants to crash the RNC, though. We’ve got all kinds of ’em. Including the Occupy freaks who tried to stash weapons to beat up the nice old ladies from the local Republican Women’s groups who’ll be comin’ in…

Fox News in Tampa reports that police have “confiscated bricks and pipes from a rooftop in Tampa, and discovered what they say is ‘anarchist’ graffiti.”  The pre-positioned rooftop stash of riot weapons was discovered by the owner of the building, which is located near the venue for the Republican National Convention.

The Fox report quotes private investigator Bill Warner, who knows exactly what the bricks and pipes would have been used for: “These are tactics terrorists use in the Middle East.  They will hide bricks in piles in buildings and so forth.  They will move into the area start their little protests.  Then they will find their pile of bricks and pipes and start busting out windows.”

The “anarchist graffitti” discovered at the scene is pictured above.  For the uninitiated, both the Guy Fawkes figure (actually the main character from the comic book and movie “V for Vendetta”) and the number “99” figure prominently in the mythology of Occupy Wall Street, the Obama-endorsed left-wing protest movement.  The eponymous hero of “V for Vendetta” is a righteous terrorist crusading against a fascist government in futuristic Britain.  “99” refers to the “99 percent,” which is the new name for the proletariat, now that blatantly Marxist language has gone out of style, and his disciples find it necessary to claim the proletariat is much larger than Marx thought it was.

And while the Occupy freaks are scary enough, they aren’t the freakiest freaks who ever freaked.

That would be the New Black Panthers, who say they want a revolution…

Michelle Williams, the chief of staff of the New Black Panther Party, said that Tampa will be “under siege” during the Republican National Convention by whites, Republicans and “tea baggers.”

In a radio interview, she criticized Black conservatives, indicated a strong distaste for white Americans and said the New Black Panther Party would protest the convention.

“I just want to say to all the listeners on this phone call, that if you are having any doubt about getting suited, booted and armed up for this race war that we’re in that has never ended, let me tell you something, the thing that’s about to happen to these honkies, these crackers, these pigs, these people, these motherf—ers, it has been long overdue,” she said.

But if we’re gonna talk about party-crashers, there’s this guy named Isaac who looks like he’s gonna be the biggest pain in the ass of the bunch…

The GOP’ll put on a good show, sure. But they’re gonna have to fight off some freaks to do it – probably not just at night.

Interested in more national news? We've got you covered! See More National News
Previous Article Something Else That Should Bug Obama
Next Article The Obama Camp Is Absolutely Enraged At This Ad…