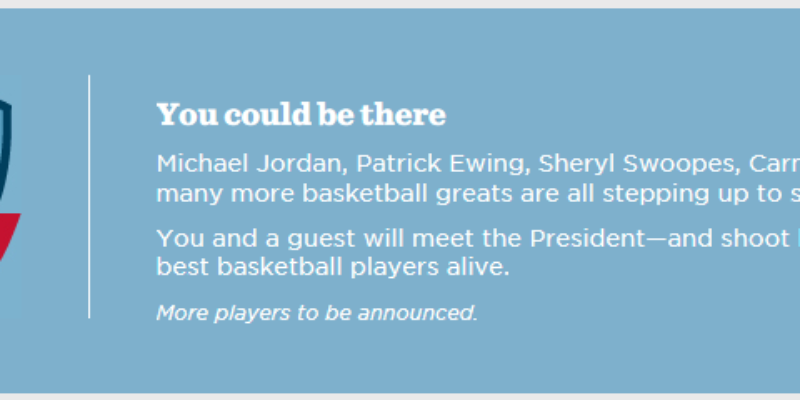 Nero might have been a mean fiddler, but how was his jump shot?

You can bet that it wasn’t as good as our b-baller-in-chief’s is. Then again, everything Obama does astounds. Everything, that is, except doing the job he was elected to do around four years ago—but have you seen his jump shot?

If not, you and a lucky friend could get to see it up close in the latest effort from the Obama camp to raise money from anyone dumb enough to contribute and risk certain humiliation by being taken to school by the president and a handful of basketball greats at the Obama Classic 2012.

Just send in a donation and you could be chosen. You don’t need to contribute, though, to increase your chances of winning. Sure, you don’t:

If you are still an Obama supporter after the last four years, humiliation might not be something that keeps you up at night. So, it’s all good. You might even learn a thing or two about shooting hoops from Obama, who is well documented to be a basketball god.

It’s not known if you’ll be invited to the locker room after the game and get to sniff the president’s jockstrap like this announcer probably got to do back in 2008 when Obama was running for office and dominating the court. You can always hope:

Even those who aren’t cool with the way the president is dragging our country down into a European-style socialist abyss that will inevitably lead to economic collapse and catastrophe have to admit he has some great moves.

It’s a good thing that the next Leader of the Free World won’t be decided by shooting hoops. Romney might have the edge in horseback riding, but never in a game of H-O-R-S-E against Obama or on a golf course, for that matter. Don’t forget, the president recently logged 100 rounds of golf played in office.

At any rate, the Obama Classic 2012 is a much better idea than other fund raisers the Obama camp has come out with in recent months. I would much rather be “faced” on a basketball court by Obama than sit across a table trying to choke down a $40,000 dinner while looking at Sarah Jessica Parker’s face. 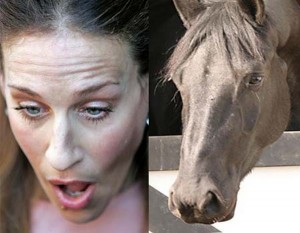