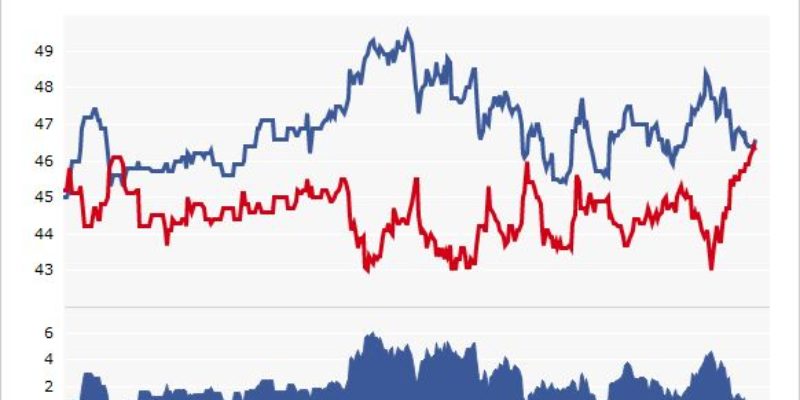 The media narrative over the weekend is that Mitt Romney didn’t get any bump out of the Republican Convention. And that might be true, since conventions aren’t the end-all, be-all affairs they used to be. Between the internet, cable news, YouTube, Twitter, Facebook and all the other vehicles for campaigns to get their messages across the days where you could expect the broadcast networks to broadcast all day, every day from conventions and viewers to watch 3-4 hours a night as the speeches took place are long gone.

Bump or no bump, though, the Obama campaign has problems everywhere. To wit…

The voters don’t think Obama deserves re-election. That’s the unmistakable takeaway from a poll The Hill has out today. By a 54-40 count respondents say they reject Obama’s job performance as a basis for re-election. In the same poll, 52 percent of the respondents say the country is worse off now than it was in September 2008, as opposed to 31 percent who say things are better. Pulse Opinion Research did the poll, and it has an R+2 sample (34D-36R-30I) which looks a lot like the 2010 electorate. It could have had the D+8 or D+10 sample the other polls out there have had and the numbers would still have shown a lousy re-elect number. Independents say he doesn’t deserve re-election by a 61-32 count, which is pretty stark. And overall, 50 percent of the respondents in the poll say they’re “not at all satisfied” with Obama on the economy.

The “are you better off than you were four years ago” question is a nightmare for the Democrats and the Obama campaign, and it ties them in knots as they try to answer it. We bring you the Bookerization of Maryland governor Martin O’Malley, who some are touting as a potential 2016 frontrunner for the Democrat nomination…

And then, less than 24 hours later after someone chewed him a new orifice…

A day after saying, no, the country was not better off than it was four years ago, Maryland Gov. Martin O’Malley reversed course on Monday and said, yes, indeed it was.

“We are clearly better of as a country because we’re now creating jobs rathare than losing them,” O’Malley, a Democrat, said on CNN’s Starting Point. “But we have not recovered all that we lost in the Bush recession. That’s why we need to continue to move forward.”

He then motioned to a panel that included Jason Chaffetz, R-Utah, among others. “Is there anyone on this panel that thinks we’ve recovered all we lost in the Bush recession? Clearly we’re moving forward, we’re creating jobs, unemployment is down, job creation is up. And that job creation would not happen without the president’s leadership.”

And while that might not have inspired anyone, at least the president didn’t beclown himself like his deputy campaign manager Stephanie Cutter did…

Cutter’s statement has the odor of a Republican attack ad made to order, because it almost knocks you out with its Famous Last Words character.

Because today, we have a new report on manufacturing activity, and it’s horrible.

U.S. manufacturing shrank at its sharpest clip in more than three years in August while U.S. construction spending in July fell by the most in a year, new reports showed on Tuesday.

The Institute for Supply Management said its index of national factory activity fell to 49.6 in August from 49.8 in July.

The reading fell shy of the 50.0 median estimate in a Reuters poll of economists. A reading below 50 indicates contraction in the sector.

Construction, which has been in an economic depression for pretty much the entire Obama administration, stinks like a dead nutria on a Mississippi beach as well…

U.S. construction spending fell in July from June by the largest amount in a year, weighed down by a big drop in spending on home improvement projects.

Yet the odds of a big change in the employment picture are slim. Despite an uptick in hiring in July, economists predict the U.S. will continue to add jobs at a modest rate that’s disappointing by historical standards.

In August, economists surveyed by MarketWatch forecast the U.S. added 120,000 jobs, down from an initial estimate of 163,000 in the prior month.

While that’s enough to keep pace with the natural expansion of the labor force, it’s far too weak to slash the nation’s 8.3% unemployment rate. The U.S. would need to add about 250,000 jobs a month over several years to accomplish that goal and pull unemployment down to precession levels — a level, in fact, that Republican presidential candidate Mitt Romney promised in his acceptance speech.

Marketwatch’s forecasts tend to be optimistic. Look for a number less than 100,000 jobs added on Friday and a potential uptick in the unemployment rate. After all, Rasmussen is reporting that his employment index is 72.0, down to a 10-month low.

And besides, the administration’s own current statistics -before they get worse on Friday – don’t show that we’re moving in anything like the direction Cutter thinks we are. Behold the labor participation rate…

But it’s not just the economy Obama has to sweat about. As Doug Ross notes, there are other things as well…

Scaled-Back DNC Due To Fundraising Shortfalls

And there are lots of other things which don’t look good. Even before plugging in the polls that will come in this week the Real Clear Politics average is showing a bad trend. 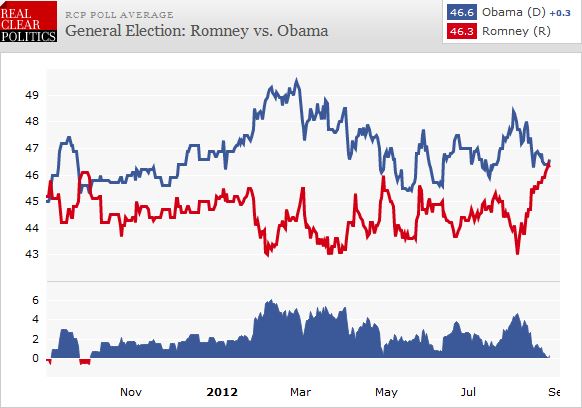 This had better be a great Democrat convention. Romney’s “bounce” might not be all that pronounced, but Romney is the one who has the momentum and he’s had it for a while. Romney is also sitting on a financial advantage, and so far he’s largely holding his fire rather than unleash the Death Star media blitz he used to such incredible effect in the primaries.

Of course, a look at this week’s roster of speakers doesn’t give the impression that it’s going to be a great event for those independents Obama is in such trouble with…

Almost no business people and awfully few hot names along the lines of a Rubio or Christie – the closest thing to that is San Antonio mayor Julian Castro and his twin brother Joaquin, who’s running for Congress.

And yes, we will note the irony, or rather lack of it, that the Democrats would feature the Castro brothers at their convention.

Romney doesn’t need a bounce. Obama is the one who needs a bounce. He’s likely to find one elusive – and not just because of that jobs report coming on Friday.