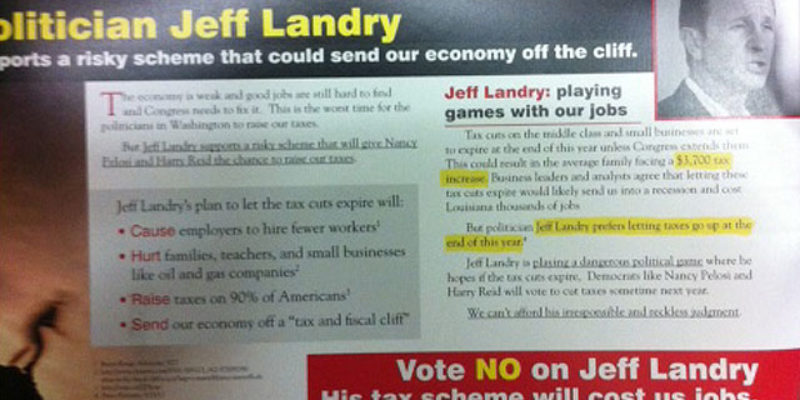 Perhaps this comes from the fact that ideologically there isn’t an overwhelming difference between the two (outside of the fact that one of them is the most pro-Palestinian Republican in Congress and a serial defender of bailouts), but it certainly appears that Charles Boustany is working overtime in an effort to play up the most inconsequential items as important in his race against Jeff Landry for Louisiana’s newly-drawn 3rd Congressional District.

Previously, Boustany made a rather wild and underwhelmingly-effective charge that Landry was a tax cheat, complete with an allegation that companies owed by Landry were as much as three weeks late in paying property taxes. Landry answered that attack by producing letters from the sheriffs of the parishes he supposedly was delinquent in paying to the effect that he was in good standing and always had been.

The latest is an attack on Landry for opposing a full treatment of tax reform in the upcoming lame-duck congressional session. It’s on radio and TV in the Lafayette and Lake Charles markets, and it’s got a direct-mail piece that drops today… 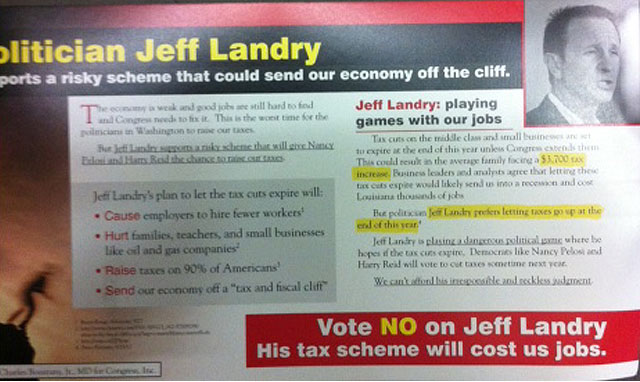 What Boustany is saying is that since Landry opposes doing a tax reform deal in the lame-duck session, he’s opening the door to a tax increase.

Of course, Landry’s position is essentially the same as Mitt Romney’s position, which his campaign was quick to point out using a Washington Post front-page article today…

Romney’s position is to leave taxes as they currently are, pass something in January to make an extension of the current tax rates retroactive to the first of the year and then give Congress a year to pass a tax reform plan along the lines of what he’s been stumping for – a 20 percent across-the-board tax cut to be offset by the elimination or reduction of exemptions and deductions.

Which is Landry’s position.

“Why would we want to try to bundle these major policy decisions, that basically we’ve been having a debate about for decades, into a lame duck session with people that aren’t going to be accountable to the people because they won’t be returning?”

“To say you can punt this into the next year, when every economist is giving us dire predictions of $400 million in taxes hitting this economy and throwing us into recession, is irresponsible,” Boustany said.

What this largely comes down to, frankly, is something which doesn’t benefit Boustany among conservatives. Boustany was a big backer of TARP back in 2008, and has been quite effusive in his statements to the effect that had TARP not passed the economy would have gone off the same kind of cliff he says Landry wants to drive it off by not supporting a lame-duck compromise on taxes.

Preliminary indications on the lame-duck session don’t particularly offer much hope that it will produce anything of value, by the way. From the Washington Post piece Landry is using to rebut Boustany’s attack…

In a speech at the National Press Club, Schumer said lowering the rate paid by top earners makes no sense in an age of rising income inequality and soaring debt. The speech took a direct jab at Romney, but its larger goal was to reset the parameters of the debate heading into the year-end battle.

“These promises of lower rates amount to little more than happy talk when the math behind them doesn’t add up,” he said. “It is an alluring prospect to cut taxes on the wealthiest people and somehow still reduce the deficit. But you can’t have your cake and eat it, too.”

Many Democrats, including Obama, have embraced lower rates as a central tenet of tax reform. Last year, in failed negotiations with House Speaker John A. Boehner (R-Ohio), Obama agreed that the top rate should be reduced from 35 percent.

On Tuesday, Schumer sought to upend the apparent consensus. He urged Democrats to “scrap” the old approach and demand higher rates — not only for the wealthy but also for investment income. Revenue raised by closing loopholes and deductions should be dedicated entirely to lowering deficits, he said, not to lowering rates — the GOP’s primary policy objective.

Senior Republicans quickly accused Schumer of sowing land mines on the path to compromise and inviting continued stalemate at the risk of economic calamity.

What it sounds like, if we’ve read Boustany correctly, is that he’d be willing to compromise with Schumer’s hard line and create inertia in favor of higher tax rates next year in exchange for holding off the possibility of negative short-term economic consequences if it takes a couple of weeks into Romney’s term to fix the tax issue.

And that might be a valid position. A lot will depend on whether the GOP can carry some of its lackluster Senate candidates across the finish line and take the majority on Nov. 6, and of course whether Romney can finish off Obama. Romney in the White House and GOP control over both the House and Senate would produce a far better result in January than Obama and Harry Reid will in a lame-duck session. But if the Republicans can’t take both, Boustany might be right that it’s a bad idea not to have a lame-duck session.

But the point may be that the strategy on the lame-duck is probably best made after seeing what the electoral results will be.

And in any event, is it really a good issue to attack Landry on? Sure, there are differences between the two candidates. But they’re largely strategic, no? Neither wants to see tax increases, and neither believes in soaking the rich. The question is how to deal with a lame-duck session when we don’t even know at this point what the situation will be after that session is over.

As a devastating blow, this falls short.