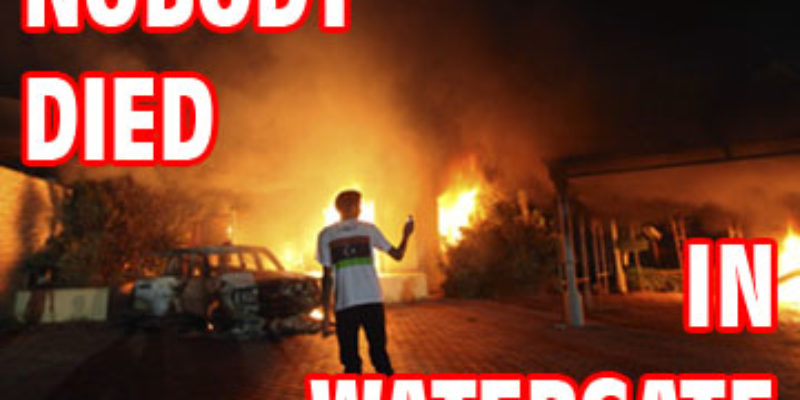 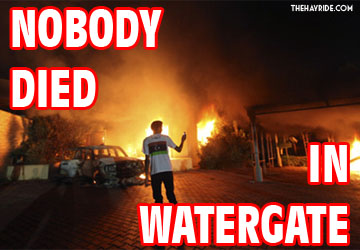 Have you seen the latest on Benghazi?

Fox News had this last night…

A series of internal State Department emails obtained by Fox News shows some some of the initial assessments of last month’s deadly consulate attack in Libya, including one email within hours of the attack that noted that the group Ansar al Sharia had claimed responsibility.

Ansar al Sharia has been declared by the State Department to be a an Al Qaeda-affiliated group. A member of the group suspected of participating in the Sept. 11 attack in Benghazi has been arrested and is being held in Tunisia.

The emails obtained by Fox News were sent by the State Department to a variety of national security platforms, whose addresses have been redacted, including the White House Situation Room, the Pentagon, the FBI and the Director of National Intelligence.

So the White House Situation Room was getting real-time notifications of what was happening in Benghazi.

The first e-mail came in at 4:05 p.m. Eastern time. It was entitled “U.S. Diplomatic Mission in Benghazi Under Attack.”

“The Regional Security Officer reports the diplomatic mission is under attack,” the email reads. “Embassy Tripoli reports approximately 20 armed people fired shots; explosions have been heard as well. Ambassador Stevens, who is currently in Benghazi, and four COM personnel are in the compound safe haven. The 17th of February militia is providing security support.

“The operations Center will provide updates as available.”

Some 49 minutes later, another e-mail entitled “Update 1: U.S. Diplomatic Mission in Benghazi” landed, indicating that the battle was over.

“Embassy Tripoli reports the firing at the U.S. Diplomatic Mission in Benghazi has stopped and the compound has been cleared. A response team is on site attempting to locate COM personnel.”

Then came the third e-mail, which makes liars out of our president and vice-president; it was entitled “Update 2: Ansar al-Sharia Claims Responsibility for Benghazi Attack”

“Embassy Tripoli reports the group claimed responsibility on Facebook and Twitter and has called for an attack on Embassy Tripoli,” the email reads.

Reuters also came into possession of the e-mails, “from government sources not connected with U.S. spy agencies or the State Department and who requested anonymity.” And the wire service’s story is fairly aggressive – if perhaps not to the extent we might like – in pointing out how the Obama White House has flat-out lied about what it knew and when.

U.S. Ambassador Christopher Stevens and three other Americans were killed in the Benghazi assault, which President Barack Obama and other U.S. officials ultimately acknowledged was a “terrorist” attack carried out by militants with suspected links to al Qaeda affiliates or sympathizers.

Administration spokesmen, including White House spokesman Jay Carney, citing an unclassified assessment prepared by the CIA, maintained for days that the attacks likely were a spontaneous protest against an anti-Muslim film.

While officials did mention the possible involvement of “extremists,” they did not lay blame on any specific militant groups or possible links to al Qaeda or its affiliates until intelligence officials publicly alleged that on September 28.

There were indications that extremists with possible al Qaeda connections were involved, but also evidence that the attacks could have erupted spontaneously, they said, adding that government experts wanted to be cautious about pointing fingers prematurely.

“Mixed,” as in Al-Qaeda was threatening to hit our consulate and our embassy and had already set off a bomb at the consulate’s wall in June but one line in one report about an anti-Islamic YouTube gives the White House an out to claim ignorance.

Meanwhile, an Al-Qaeda group took responsibility for hitting our consulate immediately after doing so, and that was reported to the White House Situation Room on the day of the attack.

So Obama knew – or should have known – that Benghazi was a terrorist attack by an Al Qaeda group. And this is what he said the morning of Sept. 12 in the White House Rose Garden…

Doesn’t exactly fit with what we know he knew, right?

Mitt Romney hasn’t really attacked Obama on his Benghazi incompetence and lies, although he has a great deal of ammunition with which to do so.

The thought, one supposes, is that Obama will burn on Benghazi whether Romney lights a match or not.

And with these e-mails proving the mendacity of this president and his stooges about a grave matter of national security, he might be correct in that assessment.

The chances are that Obama will continue attempting to cover up Benghazi until Election Day rather than face the American people and give us the honest answers we deserve. But with each day and each new revelation, this mess gets worse – and the reckoning at both the ballot box and in Congressional and legal hearings becomes more prospectively severe.

UPDATE: Jay Carney says the release of these e-mails doesn’t change anything.

Carney does look a bit like Kevin Bacon, after all.

UPDATE #2: The Center For Security Policy’s Frank Gaffney has an op-ed at the Washington Times which seeks to explain some of the “why” from Benghazi. And his conclusion is fairly explosive…

The evidence suggests that the Obama administration has not simply been engaging, legitimating, enriching and emboldening Islamists who have taken over or are ascendant in much of the Middle East. Starting in March 2011, when American diplomat J. Christopher Stevens was designated the liaison to the “opposition” in Libya, the Obama administration has been arming them, including jihadists like Abdelhakim Belhadj, leader of the al Qaeda franchise known as the Libyan Islamic Fighting Group.

In other words, our Benghazi operation was a Fast And Furious/Iran-Contra combo on steroids.

Gaffney might be right, even though it comes off as a conspiracy theory. After all, clearly something more substantial is going on than what we’ve been given.
.