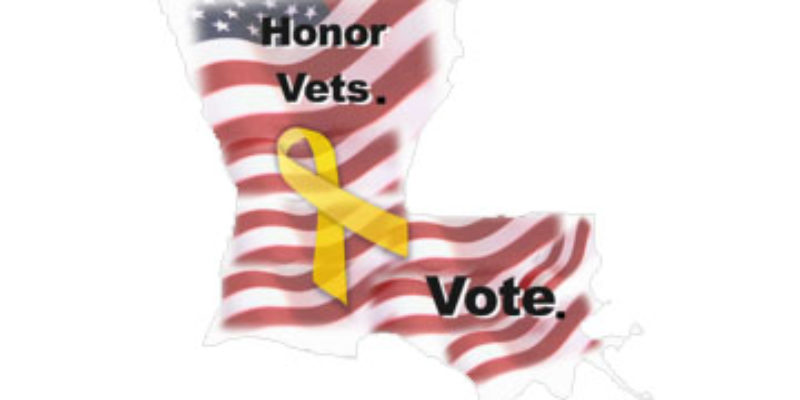 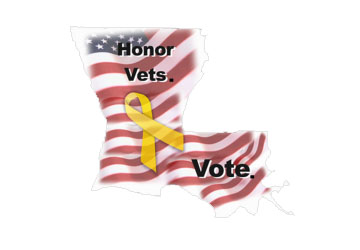 At any time, voters can sign up by visiting www.sos.la.gov/honorvets; completing and mailing a detachable form from rack cards at locations throughout the state; or by calling an Outreach staff member at 225.342.4479. Upon request, voters will receive a printable certificate, bumper sticker and/or lapel pin. After receipt of the sticker and/or pin, voters should show their appreciation for our servicemen and women by displaying the sticker and wearing the pin. Voters may dedicate their vote to more than one veteran, but bumper stickers and lapel pins will only be issued once per voter. Please note that all information except the address will be posted on the Honor Vets. Vote. dedication page of this website.

The program debuted shortly after Secretary of State Tom Schedler returned from a trip to the Middle East to educate and assist servicemen and women and their families regarding military and overseas absentee voting. Secretary Schedler joined four fellow secretaries of state and Federal Voting Assistance Program staff members on a mission to reach out to individuals serving our country and our great State of Louisiana regarding our electoral process. With stops in Kuwait, Qatar and Bahrain, Secretary Schedler was able to personally meet with Louisianians, thank them for their service and assess the status of their voting process.

FVAP adminsters the federal responsibilities of the Uniformed and Overseas Citizens Absentee Voting Act. In 2009, Congress expanded the 1986 UOCAVA by enacting the Military and Overseas Voter Empowerment Act to provide greater protection for overseas citizens, uniformed service members and their eligible family members’ right to vote in federal elections. As of Oct. 2, the Secretary of State’s Office has received a combined total, which includes members of the military and civilians, of 4,313 requests for ballots.

Interested in more news from Louisiana? We've got you covered! See More Louisiana News
Previous Article Jindal Announces $100 Million Capital Project For LSU Engineering School
Next Article The Egyptians Don’t Have Bob Livingston Around To Get Them That $450 Million