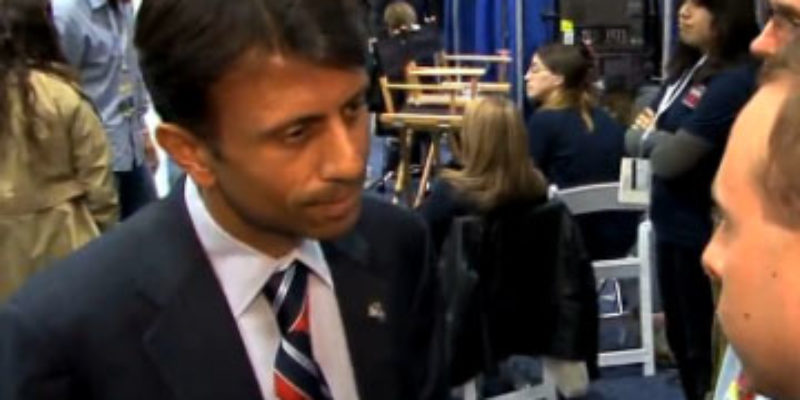 From the spin room at Hofstra last week, and just posted at the Daily Caller site this afternoon…

“It’s absolutely not true. … What Gov. Romney has said is, one, he wants to give parents more choices about where their kids go to school so they actually empower parents so their kids get a great education,” he told TheDC after the second presidential debate.

“Secondly, he says he wants to encourage states to actually reward great teaching in the classroom because the research all shows the single most effective predictor of whether a child is going to do well academically is the quality of their teacher, yet too many of our states’ policies on tenure, on compensation, on hiring and firing,
aren’t tied to actual teacher effectiveness due to the treatment.”

Obama “simply wants to throw more resources” and “more money” at public education which “clearly is not the answer,” Jindal said.

“If that was the answer, we’d already have the best education system in the world. … So the bumper sticker on the other side is really easy; it’s easy for the president to get up there and distort the governor’s policies. Bottom line is Gov. Romney’s been very, very clear he wants to give parents more choices and he wants to reward effective
teaching. That’s what it’s going to take to get back to the United States being No. 1 in the world.”

Jindal should know that, because he’s dealt with the teacher unions ad nauseam here in Louisiana for whom there is no possible improvement in education without throwing money at the problem.

This is worth mentioning in light of the fact some, including Eliot Stonecipher, have been touting Jindal as a potential Secretary of Education in a Romney administration. Given Jindal’s acceptance of the presidency of the Republican Governors’ Association for next year, we would doubt that – but one never knows.