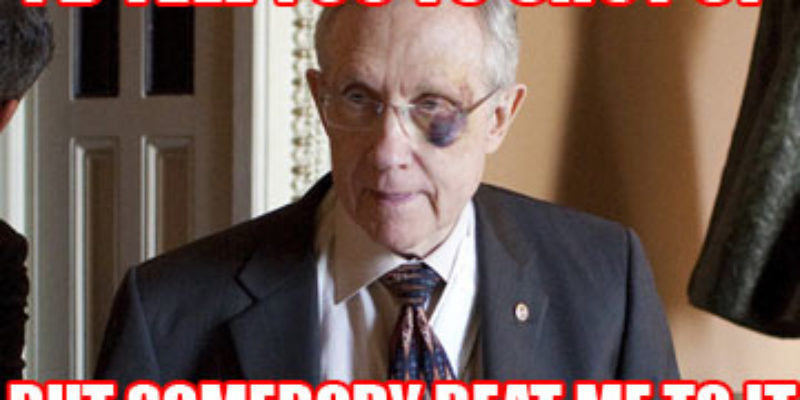 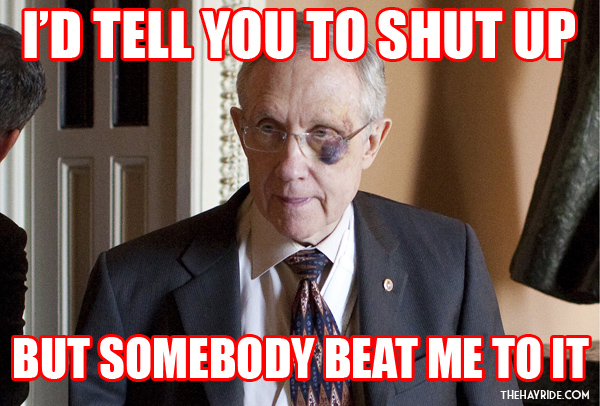 Why, it’s Harry Reid, of course.

Five days before the election, Senate Majority Leader Harry Reid has ruled out trying to work with Mitt Romney should he win next week.

“Mitt Romney’s fantasy that Senate Democrats will work with him to pass his ‘severely conservative’ agenda is laughable,” Mr. Reid said in a statement on Friday, trying to puncture Mr. Romney’s closing election argument that he’ll be able to deliver on the bipartisanship President Obama promised in 2008 but has struggled to live up to.

And then just a little more…

“Mitt Romney has demonstrated that he lacks the courage to stand up to the tea party, kowtowing to their demands time and again. There is nothing in Mitt Romney’s record to suggest he would act any differently as president,” Mr. Reid said.

Because Harry Reid stands up to the loons in his party all the time, right?

It will take a net GOP gain of three seats in the Senate to make Reid the minority leader.

Republican-held seats in Indiana, Arizona, Nevada, Maine and Massachusetts are in jeopardy, which in the worst case scenario would make it necessary to win eight Democrat seats to put Reid’s tyranny-of-the-majority out to pasture.

There are eight such seats possible – though it’s our guess the GOP won’t need quite so many (Jeff Flake will hold the Arizona seat for the Republicans, and Richard Mourdock has a poll showing him barely ahead in Indiana, which the Obama campaign has given up on; we think he’ll hang on despite his falling into the pro-life-rape trap, plus Scott Brown isn’t dead in Massachusetts yet and Dean Heller is likely to win re-election in Nevada).

Rick Berg is likely to win a close race in North Dakota.

Deb Fischer is going to pull through in Nebraska.

George Allen is as likely to win in Virginia as not. The polls are back-and-forth on the race with neither Allen nor Tim Kaine showing much sign of a breakout.

Linda McMahon is a little behind in Connecticut, but given the little-recognized chaos going on there in the aftermath of Sandy and what it could do to the Democrats’ turnout there, don’t count her out.

Connie Mack is a bit behind in Florida, but he’s being written off thanks to two laughably pro-Democrat polls put out by the New York Times and PPP; outside of those polls the race has been consistently within the margin of error. It wouldn’t be a surprise for Mack to make a late surge and top Bob Nelson.

In Missouri, Todd Akin ran within two of Claire McCaskill (46-44) in a Mason-Dixon poll last week. Though other polls have the race further apart than that, most of them are Democrat polls (with a 51-43 Rasmussen poll from two weeks ago the exception), and other than a poll put out by the McCaskill campaign and the Rasmussen poll just mentioned, McCaskill doesn’t poll above 47 percent. Given the way Akin has been demonized and outspent to date, the idea that McCaskill hasn’t been able to put him away means that race could very well go differently than everyone assumes. She should not be under 50 at this point, but she is – even her internal poll only has her at 53.

Denny Rehberg is in a dead heat with Jon Tester in Montana.

The most recent poll in Ohio, done by Republican firm Wenzel strategies, has Josh Mandel with a 50-45 lead over Sherrod Brown. That poll is a bit of an outlier, but then the majority of the Ohio polls have been done by national firms polling the presidential race with grossly pro-Democrat skews in the party-ID of their samples.

In Pennsylvania, Bob Casey is consistently polling below 50 percent against Tom Smith with the exception of three polls by Democrat firms. The race is too close to call, and Smith clearly has the momentum – as does Romney in that state.

And in Wisconsin, Tommy Thompson is neck-and-neck with Tammy Baldwin. That race will come down to the ground game, and the GOP’s ground game in Wisconsin is legendary – not to mention well-tested thanks to the endless failed recall elections there.

Ultimately, this means of 15 seats that will decide the Senate there are 10 currently in Democrat hands, and only a slight overperformance by GOP candidates in the polls – which GOP candidates typically do – would move the Senate into Republican hands.

And put Harry Reid out of his job as majority leader.

Which needs to happen, coincidentally. Because in the event Romney wins, we now know Reid isn’t capable of productive leadership. He just told us so.

What’s more, Romney has a record of working across party lines. When has Harry Reid ever done that?

This is a man who continues to promulgate the proven lie that Mitt Romney is a tax cheat. Without evidence, and without remorse or apology. He can’t govern.

Neither can Obama, as we’ve seen.

Perhaps Romney and Mitch McConnell can do better. One imagines they could produce a federal budget, something Reid has refused to do for four years.