And here we were going to knock off for the day. We’ll update this as the word comes in.

How much of this has to do with Benghazi is a good question. If it did, he could have done this LAST FRIDAY.

Of course, we didn’t know the Iranians were shooting at our drones last week, either.

You find out all kinds of things when Obama just got re-elected, right?

UPDATE: The UK Daily Mail says it’s because he got caught cheating on his wife.

Interesting. One wonders if perhaps there’s a blackmail possibility on this.

UPDATE: Does this mean Petraeus won’t be testifying at the Benghazi hearings next week?

Is Director David Petraeus a fatality of Chicago politics – made to remain silent prior to the election and now left to act as the administration’s sacrifice to Congressional investigators in the wake of the Benghazi scandal?

Or is the former military general preparing to unleash facts that will lead directly back to the Obama White House and the president himself regarding what really happened on September 11th of this year when four Americans – including a U.S. ambassador, were killed during a coordinated terrorist attack against an American consulate?

Nahhhhhh, that ain’t gonna cut it. Subpoena this man and give him immunity. At that point he’s got no choice but to cough up the goods.

UPDATE: So after bouncing this off a few people who are somewhat “in the know,” here’s my theory on this in a nutshell…

Those leaks Fox News was getting came from Petraeus, and they basically stopped after the CIA put out that statement that nobody told anybody to stand down. Remember that? Initially, everybody said that was Petraeus throwing Obama under the bus, but then the denial expanded into a a general denial of the “stand down” order. And that was a bit peculiar.

But what if what was really going on was that Petraeus was leaking to Fox, and somebody went to him and told him they knew about his affair and he’d better shut up if he knew what was good for him?

So let’s say he clammed up, probably hoping that Romney would win. Romney wins and his situation becomes a lot cleaner – Republicans like him, and when he says he’s blameless for Benghazi the House committee investigating it will believe him. But Romney didn’t win. And when Romney didn’t, Petraeus decided he’d out himself so they’d have nothing on him – which he did today.

After all, who announces they’re resigning and it’s specifically because he’s been cheating on his wife? It’s always “personal reasons,” or “spending more time with my family,” or “stress,” or whatever other “none of your business” rationales for resignations. But Petraeus came right out and gave the full mea culpa. That’s peculiar, and interesting – because it points to him getting out from under a blackmail scenario.

And the bit about not testifying – which is the new thing being reported this afternoon, and it’s significant because as of yesterday Petraeus was going to testify – is Petraeus angling to be subpoenaed and immunized so he’s in the clear when he blows the whistle on this whole thing.After all, it was two of HIS guys who got left to die on that rooftop.

That’s the theory. You guys are free to have at it.

UPDATE: By the way, the affair was with Paula Broadwell, who wrote a biography of Petraeus.

And yeah, I know the rules. This is Paula Broadwell… 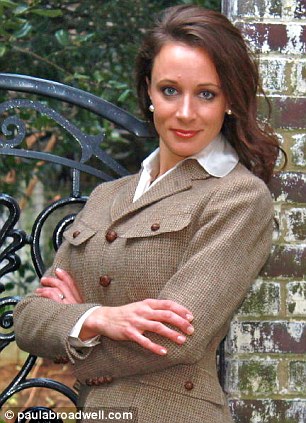 So…understandable, I guess. He’s got a combover, she’s got bodacious tatas. He probably never had a chance.

Which doesn’t make it OK.

The word is that the FBI was poking around potential blackmail threats and “uncovered” Petraeus’ affair. And became suspicious that Broadwell was rummaging through Petraeus’ e-mails.

And how long did President Obama know that his CIA director was susceptible to blackmail, and yet kept him on the job until he resigned on his own, after the election?

Just like everything else with this administration, it stinks.

UPDATE: Newsmax has more, and it would invalidate some of our theory on this case – but not exactly to the administration’s profit..

However, an FBI source says the investigation began when American intelligence mistook an email Petraeus had sent to his girlfriend as a reference to corruption. Petraeus was commander of U.S. Forces in Afghanistan from July 4, 2010 until July 18, 2011.

The investigation began last spring, but the FBI then pored over his emails when he was stationed in Afghanistan.

Given his top secret clearance and the fact that Petraeus is married, the FBI continued to investigate and intercept Petraeus’ email exchanges with the woman. The emails include sexually explicit references to such items as sex under a desk.

Such a relationship is a breach of top secret security requirements and could have compromised Petraeus.

At some point after Petraeus was sworn in as CIA director on Sept. 6, 2011, the woman broke up with him. However, Petraeus continued to pursue her, sending her thousands of emails over the last several months, raising even more questions about his judgment.

And then it gets a little ugly…

FBI agents on the case expected that Petraeus would be asked to resign immediately rather than risk the possibility that he could be blackmailed to give intelligence secrets to foreign intelligence agencies or criminals. In addition, his pursuit of the woman could have distracted him as the CIA was giving Congress reports on the attack on the Benghazi consulate on Sept. 11.

The CIA ‘s reporting to Congress included a claim that protests over a YouTube video played a role in the attacks, thus allowing Obama to initially discount the possibility that the U.S. had suffered another terrorist attack just before the election.

In contrast, based on real time video and reports, the State Department was reporting that the attack that led to the deaths of four Americans, including U.S. Ambassador J. Christopher Stevens, was terrorist-related. The State Department reported that there were no protests at the consulate.

FBI agents on the case were aware that such a decision had been made to hold off on forcing him out until after the election and were outraged.

“The decision was made to delay the resignation apparently to avoid potential embarrassment to the president before the election,” an FBI source says. “To leave him in such a sensitive position where he was vulnerable to potential blackmail for months compromised our security and is inexcusable.”

Petraeus was vulnerable to blackmail, all right. But nobody in the administration was worried about that. Why? Who do you think was already blackmailing him?

They knew he was having an affair BEFORE he was appointed as head of the CIA. They knew that and appointed him anyway. The fact that he was compromised was a FEATURE, not a bug. It meant Petraeus – who had credibility with the public and was regarded as a bipartisan hero with stature among non-leftwingers – could be controlled.

And it’s why he could be told to go along with that cock-and-bull story about the YouTube. Remember the closed-door CIA briefing to Congress which had so many members hopping mad at what they perceived as a pack of lies being fed to them?

The attack that killed four Americans in the Libyan consulate began as a spontaneous protest against the film “The Innocence of Muslims,” but Islamic militants who may have links to Al Qaeda used the opportunity to launch an attack, CIA Director David Petreaus told the House Intelligence Committee today according to one lawmaker who attended a closed-door briefing.

Rep. Dutch Ruppersberger, the top Democrat on the House Intel committee, said Petraeus laid out “a chronological order exactly what we felt happened, how it happened, and where we’re going in the future.”

“In the Benghazi area, in the beginning we feel that it was spontaneous – the protest- because it went on for two or three hours, which is very relevant because if it was something that was planned, then they could have come and attacked right away,” Ruppersberger, D-Md., said following the hour-long briefing by Petraeus. “At this point it looks as if there was a spontaneous situation that occurred and that as a result of that, the extreme groups that were probably connected to al Qaeda took advantage of that situation and then the attack started.”

Petraeus did not speak to reporters on his way in or out of the briefing. When he left the meeting, the former four-star general was trailed by about a dozen intelligence officials and a couple of Capitol police officers.

Petraeus was under the thumb of the Chicago crowd. And he was about to go before a Congressional hearing and be forced to lie under oath for the administration. Instead of doing that, he resigned, and outed himself for the affair.

And now he says he won’t testify. Which, of course, is not going to fly; he’ll be subpoenaed, and more than likely he’ll be immunized. Once he is, he’ll be in a position to blow the whistle on the administration. But if he does, he’s probably going to be prosecuted under the Uniform Code of Military Justice. Is that worth risking contempt of Congress? It’s an interesting question.

A smart guy like Petraeus probably already has a plan. He would have had a plan before he resigned this week.

The Obama crowd has to be very nervous at the moment. You can be that acting CIA head Michael Morrell, who will testify in Petraeus’ place on Thursday at that Benghazi hearing, will offer nothing but the party line, with mealy-mouthed words to the effect of “to the best of my understanding” preceding his answers. That won’t please the committee, and sparks will fly. But this issue won’t go away, because now we not only have four dead Americans in Benghazi, including two from the CIA, we have lots of other questions – like was Petraeus hog-tied into running guns to Al Qaeda through that Benghazi mission? What pieces of our Afghan War policy, which has devolved into disaster, were forced on Petraeus and his successors as a result of his being compromised? Who “suggested” to Petraeus that the YouTube video should be put forth as the cause of Benghazi?

As Charles Krauthammer noted last night, now that this a sex thing the mainstream media will cover it and it will unravel fully.

UPDATE: Ronald Kessler, who wrote the Newsmax piece, was on Fox News to talk about his information on the case. His take: several cover-ups are going on.