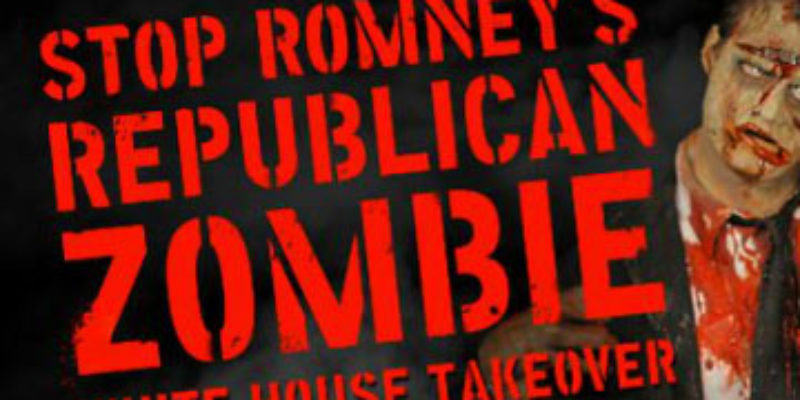 Exhorting folks who agree with you politically to murder those who don’t? Sure, the Left is for that.

Anything to win, except a clue how not to offend and disgust decent people. We bring you the clowns from RepublicanZombieDefense.com.

This isn’t an Obama campaign ad or a DNC ad. It’s the product of someone named Luke Montgomery, a gay activist and animal rights nut who engages in idiotic stunts like this on a regular basis. From FCKH8.com, another of Montgomery’s websites which sells pro-gay t-shirts…

It’s the best of both worlds! FCKH8.com is a private T-Shirt company with a directly charitable mission that we’re personally passionate about: fighting homo-H8 everywhere. We’ve raised over $250,000 through T-Shirt sales for gay rights charity causes. Our company’s work also includes H8SUX.com – giving away thousands of free “OK4U2BGAY” T-Shirts to kids in schools. We believe that in a world full of bullies, suicide, and hate, tens of thousands of kids and adults wearing a pro-gay message is life-saving and great. Everyone says “it gets better” – and we think this is a great way to make it better! We believe the world would be a better place if good causes had the same savvy marketing as products like iPods, soft drinks and designer jeans, and we hope you agree. As we grow, we’re eager to also expand to a 501(c)(3) charity. Our bottom line is making a difference.

But we wanted to show you this ad anyway, so you can see the kinds of people you’re embracing if you support Barack Obama.

Interested in more national news? We've got you covered! See More National News
Previous Article What Was Valerie Jarrett Doing Meeting With The Iranians?
Next Article Up For Another Obama Scandal? Let’s Revisit The Blago Case!