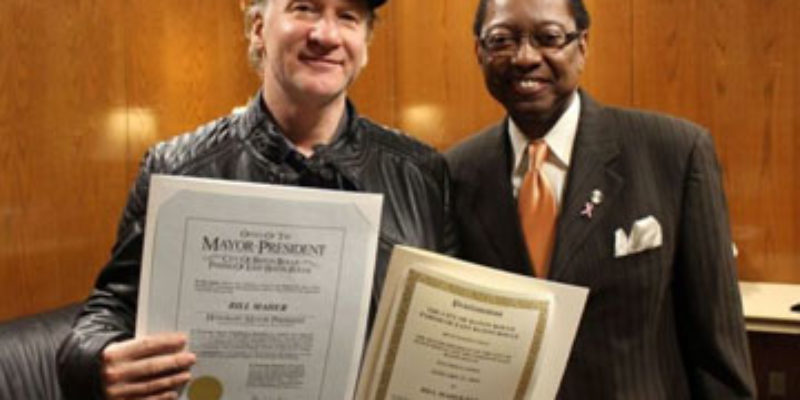 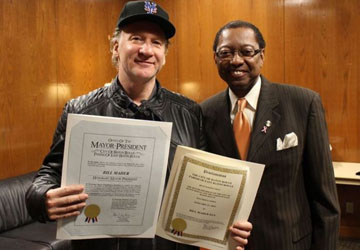 It wasn’t enough that city-parish resources were used last fall to ferry Louis Farrakhan around Baton Rouge, an error in judgement which was a small issue in Kip Holden’s easy re-election victory over Mike Walker.

Now that Holden is free from political risk as a third-term mayor, there are fresh errors to report – and over the weekend there was one for the books.

The Times-Picayune offers up the story of Holden’s embrace of left-wing HBO presenter Bill Maher, whose grotesquely offensive comments on sex, race and those who disagree with him politically ought to make him untouchable in polite society, over the weekend at the Baton Rouge River Center…

Bill Maher is not one to mince words. Like him or leave him, he’s unapologetic in his distaste for the conservative political machine, organized religion and the fear-mongering mass media. He also doesn’t soften his routine depending on location.

“It’s great to be in the liberal South,” Maher said as he took the stage Sunday night at The River Center in Baton Rouge. He echoed remarks made in an interview last week that “no matter how conservative an area is, there’s a lot of progressive, freethinking people marbled into the population. And the problem is, of course, they’re surrounded by a bunch of rednecks.”

In his hour-long show, which mixed comedy with political commentary, Maher touched on many of the issues on American minds today including gun control, climate change, racism and intolerance and religion.

The theater was only a little more than 2/3rds full, an indication that there are a lot more “rednecks” than Maher gives Baton Rouge credit for, and a few less “progressive, free-thinking” marbles. Like the ones who exploded in applause when Maher touted legalized marijuana in his speech.

But apparently not enough “rednecks” to stop a third term for a mayor who thinks it’s as good an idea to make yesterday “Bill Maher Day” in Baton Rouge as it was to send the SWAT team down to New Orleans to serve as Farrakhan’s bodyguards from the airport to Southern University.

Interested in more news from Louisiana? We've got you covered! See More Louisiana News
Previous Article Rep. Jeff Thompson Announces ‘Defend Louisiana Campaign’
Next Article SADOW: Obamacare Is A Bad Deal, And Jindal Was Smart Not To Play In It