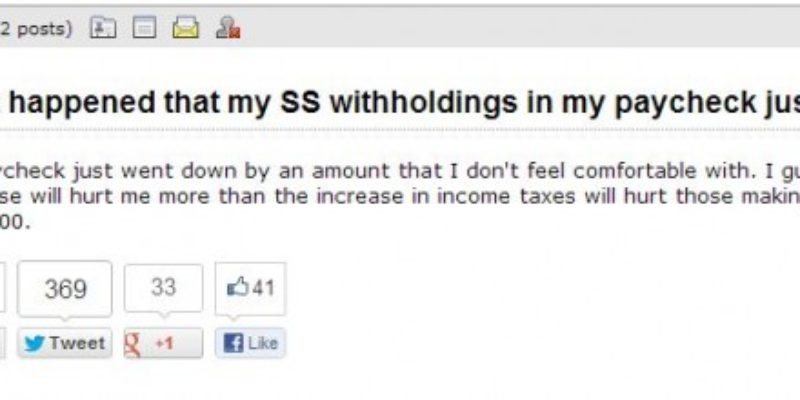 Today is payday for lots of Americans, and they’re NOT happy about the Social Security tax holiday ending.

If you go on Twitter you’ll find lots of stuff like this. The clueless-cool set who voted overwhelmingly for Obama are now wondering how come he said taxes weren’t going to go up on 98 percent of the American people when here’s their first paycheck and taxes went up.

Call it Schadenfreude if you like. It’s a nasty habit. But considering that Obama managed to get himself re-elected despite a record more suited for the guillotine by playing Santa Claus, and considering that the media has rightly cast the fiscal cliff deal as a victory for the president and a loss for the Republicans, there’s a valuable silver lining here.

You can’t blame this on the GOP. Obama owns this.

Now, as a matter of policy rather than politics the two percent increase in Social Security withholding today isn’t exactly a tax hike. In fact, folks are paying today what they should have been paying for the last two years; the gimmicky payroll tax holiday was a raid on Social Security’s solvency at a time the program absolutely couldn’t afford it and putting that money back into the system was an urgent necessity.

Particularly given that the economic stimulus the tax holiday was supposed to generate was nonexistent. Which gives the lie to the Democrat idea that tax cuts on middle-class people will goose the economy – people who actually understand economics recognize that true growth comes from savings and investment, which can fuel innovation and technology and the resultant increases in productivity that provide a better standard of living for everybody, but when Nancy Pelosi can claim unemployment benefits create jobs and isn’t laughed out of Congress it’s clear that lessons in reality are sorely needed.

So we’ve now had one of those lessons, and it’s not just an economic lesson – the Social Security tax holiday offered negligible benefits – but a political one as well.

Obama didn’t run on cutting Social Security taxes last year, and he didn’t fight to make those cuts permanent this year. Meaning he didn’t see any political benefit in doing so.

Except today he’s getting the political downside to the shrinkage in take-home pay.

Sure, the media will spin this as John Boehner trying to cut taxes for rich people and screwing Joe Six Pack. But nobody’s going to buy that. Not when they’ve got to stay home and dine on Mac & Cheese rather than get a burger at Applebee’s this weekend and every other weekend for the foreseeable future; this is Obama’s fault.

And that’s actually good. It’s good medicine for people who didn’t think there were personal consequences to voting for Obama without a clue what they were voting for. Maybe some of these drones will develop a little empathy for people whose taxes went up a hell of a lot more than two percent this week.

UPDATE: Hey, thanks for the Instalanche, Professor Reynolds!

Interested in more national news? We've got you covered! See More National News
Previous Article More Brilliant Satire Of Gun-Grabbers, This Time On Facebook
Next Article SARGE: Out Of Remission