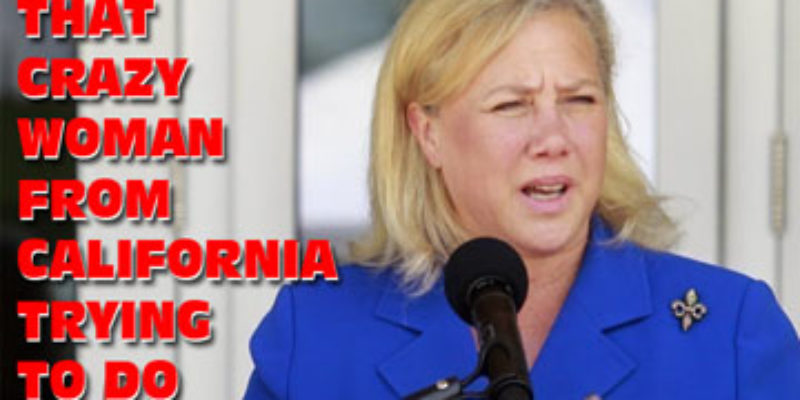 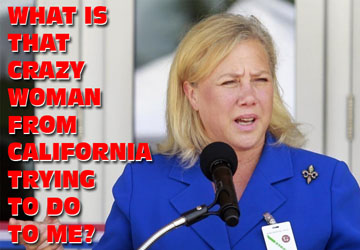 One can only imagine the inevitable conversation in a ladies’ room on Capitol Hill when Sens. Dianne Feinstein and Mary Landrieu happen to be standing in front of the same mirror.

Landrieu probably turns to Feinstein and says “what did I ever do to you?”

That’s because Landrieu, whose lifetime voting record score from the National Rifle Association is a “C,” might well have to deal with the consequences of voting for or against Feinstein’s thoroughly unwise “assault weapon” ban proposal announced today, which would make some 150 different weapons illegal in America. The chances of such a far-left bill even getting to the Senate floor aren’t the best, as Senate Majority Leader Harry Reid has never committed to any such legislation being moved forward, so it’s entirely possible that Landrieu won’t have to fight off her own party in order to keep her re-election chances alive.

But if that bill does get to the floor and Reid and the president begin applying pressure to Democrats to vote for it, Landrieu’s political life will be at stake. There is no way that a senator from Louisiana, one of the most pro-gun states in the union and a state which just in November passed a constitutional amendment imposing a strict-scrutiny standard for judicial review of any laws affecting 2nd Amendment rights by a 73-27 margin, could survive re-election after voting to ban 150 different kinds of guns.

Particularly not if the debate on this bill lasts long enough for more than a few of Landrieu’s Democrat colleagues to make asinine and offensive statements like those of freshman Connecticut senator Chris Murphy today. Murphy made the indefensible statement that  “Kids would be alive today in Newtown, Connecticut if the law that we’re proposing today were in place on December 14th of last year. It’s as simple as that.” at the podium where Feinstein announced the proposal. Multiple statements along those lines will make Democrats in places like Louisiana an endangered species – and even though Landrieu isn’t exactly a gun-grabber along the lines of a Feinstein, just having a “D” behind her name is likely to cause trouble if this thing gathers any steam in the Senate.

Understand that Feinstein’s bill has zero – ZERO – chance of becoming law. Even in the virtually impossible eventuality that Reid were to grind up Landrieu’s political career (and that of at least another half-dozen Democrat senators from red states) and drag this rotting carcass of a bill across the Senate’s finish line, no sentient being in America believes there are 218 votes in the House of Representatives in favor of it.

This is an exercise in legislative onanism, nothing more. The question is when, not if, somebody kills it. Mary Landrieu’s surely hoping the answer is “sooner, rather than later.” And Landrieu’s not alone.

BY THE WAY: While the NRA is trashing Feinstein for her “wrong-headed” gun-grabbing, the folks at Glock have added a new installment to their web ad campaign starring R. Lee Ermey. In case you haven’t seen the first two ads, here they are…

This is a classic case of Democrats trying to win by legislation what they do not have in the culture, which is something that Republicans have caused themselves lots of problems by doing. Americans, outside of states like New York and California, aren’t interested in having their rights curtailed by people like Dianne Feinstein – and there will be a colossal price to pay at the ballot box for dumb moves like this.

Almost as dumb as messing with Courtney Hope.

Interested in more national news? We've got you covered! See More National News
Previous Article Just Got Off The Phone With Steve Scalise…
Next Article JUNEAU: We’re Going To Borrow From Rabelais’ Will