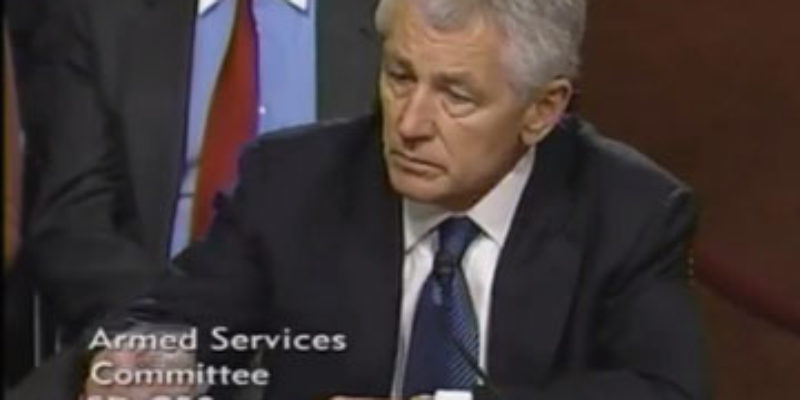 We reported earlier, with some video highlights, on the thrashing Secretary of Defense nominee Chuck Hagel took in committee hearings today.

It may be that Ted Cruz’ performance during those hearings was a major highlight, or perhaps THE major highlight. Lindsey Graham nailed Hagel fairly well also.

But David Vitter’s time with Hagel ranks up there as well. He set a predicate that what he disliked about Hagel’s nomination was his history of flip-flopping on dumb statements on foreign policy and national security, with Israel and Iran at center stage, and then he took Hagel through those statements and tied him in knots.

It was a little like clubbing baby seals (not particularly difficult work, quite painful to watch and bloody as hell), but it was a pretty good textbook example of how to calmly and quietly pour acid all over someone’s committee testimony.

Vitter, who had offered up a fairly devastating letter to Hagel about his past statements last week, said after the hearing that he believed Hagel had done himself significant harm today. “My sense is that he performed very poorly,” was the quote the Senator gave to the Times-Picayune about the proceedings.

The conventional wisdom remains that Hagel has enough Democrat support to survive a more-or-less party-line vote for his confirmation.

He’s lucky that vote will be coming soon, because his stock is tanking after one of the worst confirmation hearing performances anybody can remember. And Vitter’s getting Hagel to admit he knows nothing about Iranian politics, and that he didn’t really know what a “legitimate” government is, might have been as damaging as any of the blows the nominee took.