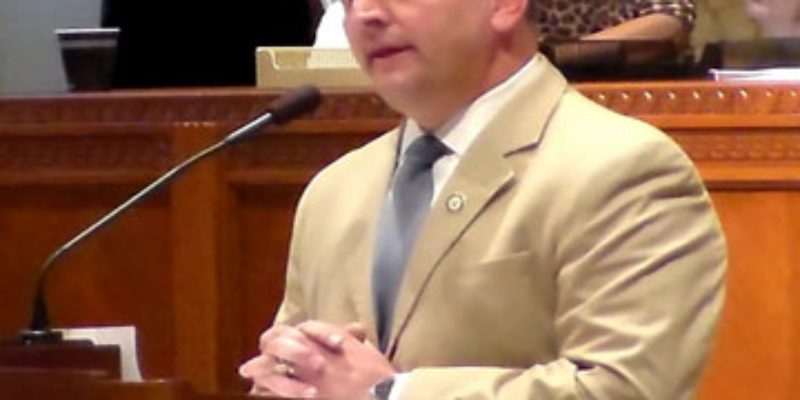 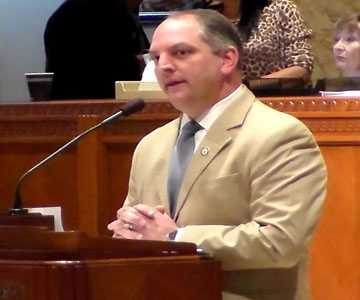 Today’s announcement that Democrat state rep John Bel Edwards of Amite will be running for governor in 2015 is a terrific development for pretty much everyone concerned.

We’re excited about it.

We’re excited that the state Democrat party will actually be running a candidate in 2015, after taking a powder in the 2011 elections. It’s almost like the Democrats plan to be a major political party in this state after all, and that’s a nice sign. For most of the past four years, Democrats have essentially refrained from participating in the electoral process, opting instead to stand on the sidelines and throw fecal matter at those attempting to govern – with Edwards as a key participant in the show.

He certainly acted that way in last year’s legislative session when the topic of reforming Louisiana’s horrendous public education system through school choice and competition was concerned. Rather than present any serious proposals – or pass along anything from his controllers in the state’s teachers’ unions – he took pot shots at Gov. Bobby Jindal’s package in an effort to dirty it up on its way to passage. Edwards was unsuccessful in doing so, largely because his side had failed to run a candidate against Jindal in the previous year’s elections and therefore had no legitimacy to complain about his agenda.

At least now Edwards’ pot shots will have something behind them. At least he and the Democrats are presenting themselves as an option for the voters of the state to evaluate.

What we hope, though, is that Edwards will run honestly. We hope that he will run as the union stooge and panderer to Democrat constituencies he actually is, rather than put on airs about being a centrist or some “new kind of Democrat.” Along these lines, we would hope that Edwards would offer transparency – by disclosing his communications with the bosses of the state’s teachers’ unions in the weeks leading up to the education reform vote. We asked for those communications through a public records request of the state legislature nearly a year ago, and we’ve been stonewalled. Edwards knows about that request and he’s volunteered nothing.

Well, if you’re going to hold yourself out as a candidate for the state’s highest political office, the people have a right to know whose water you’re carrying. Edwards ought to disclose those e-mails.

We’re not the only folks excited about Edwards getting into the race, though.

If Vitter gets into the 2015 race, which a lot of people think is going to happen (the bet here is he will, unless by some chance the Republicans are able to retake the Senate in next year’s elections, in which case Vitter would have to give up the chairmanship of the Environment and Public Works Committee if he were to be governor and therefore he might think twice about running), he needs Edwards to not only be in the race but run strong enough to make the runoff.

Because it’s more or less assured that Lt. Gov. Jay Dardenne will run, and most people think Public Service Commissioner Scott Angelle is getting into the race as well.

A Vitter-Dardenne runoff isn’t a good runoff for Vitter. The Senator will have a deeper pool of support than Dardenne, but it isn’t as wide – and Dardenne would be a lot better positioned to get Democrat votes than Vitter.

A Vitter-Angelle runoff is better, as Vitter would be in a position to make the race a referendum on Jindal. And with the current governor’s eyes focused on a potential 2016 presidential run, plus the typical diminished stature of lame-duck second term governors in Louisiana history – Mike Foster wasn’t able to carry Jindal very far in 2003, for an example – Angelle might not be able to overcome somebody with as much weight as Vitter would bring to the table. He’d have some appeal with Democrat voters, though, as a former Democrat.

But Vitter-Edwards? That is exactly the matchup he wants. David Vitter thrives on Left vs. Right elections; it’s what enabled him to blow out Charlie Melancon despite the incessant reminders of his 2001 dalliances with ladies of the night. A Vitter campaign based on My Opponents’ Ideological Predilections Means He Wants To Do To Your Pocketbook What I Did To Those Females I Paid Back In 2001 is a proven winner, and he has a 57-38 blowout victory over Melancon to show for it.

There is a rumor that Vitter might be teaming up with John Kennedy in a deal which would have the latter staying out of the gubernatorial race in 2015 and endorsing Vitter in exchange for Vitter appointing Kennedy to his Senate seat in the event he wins. This would be an interesting deal, of course, since Vitter’s seat comes up for re-election just one year later. It would work for Vitter, in that getting Kennedy out of the way would put him that much closer to the runoff.

Vitter, if he does get in, wants a four-way race between himself, Angelle, Dardenne and Edwards. Essentially you’ve got a Dardenne-Edwards battle for moderates and Democrats to get one spot in the runoff, and then a Vitter-Angelle race for the conservative vote.

Edwards getting in today means that four-way race is more possible than it has been.

Either way, it’s nice to see the state’s Democrat Party acting like they’re interested. Democrats owe it to the people of Louisiana to run their own candidates rather than sitting on the sidelines and acting like a special interest group Republicans have to pander to – which is the position they’ve taken in the last several election cycles.

So welcome to the race, Rep. Edwards. And be prepared for war.