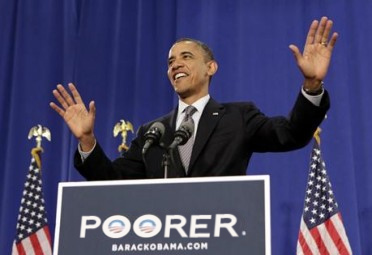 It’s always an interesting experience to watch a Barack Obama speech, like the State of the Union speech last night, with a browser open to Facebook and Twitter.

Because when Obama uncorks one of his typical initiatives – like, for example, last night when he demanded an increase in the federally-mandated minimum wage to nine dollars an hour – you’ll get a flurry of people rushing to declare he’s an idiot for thinking that will work.

I think I might have done that myself in a knee-jerk reaction, so I’m criticizing myself here as well.

The fact is, though, Obama isn’t some economic illiterate or some boob who has no idea what he’s doing.

Yes, it would be a true statement that our president hasn’t the faintest idea how to get the economy growing again. It’s true that you’d have to be a fool to think his prescriptions will create prosperity.

But fools don’t get re-elected president of the United States.

Bill Clinton wasn’t a fool. Bill Clinton recognized, after very sluggish economic performance in his first two years and a massacre of his party in the 1994 mid-term elections, that he needed a course correction. And Clinton engaged in a program of tax cuts on things like capital gains, which pumped an enormous amount of capital into the economy and ultimately fueled the dot-com boom. Clinton’s legacy as president, despite his horrendous character flaws, was that he was a Democrat who didn’t destroy the economy while in the White House.

Why wouldn’t Obama, amid what can only be called a depression economy, embrace Clinton’s economic program?

It’s not that Clinton was a genius and Obama a fool. Obama is not a fool.

And it’s not just that Obama is a hard-core ideologue. If doing a good job as president by generating good results for the country would cement your ideology as the governing ideology in Washington, then you’ve got to create those results…right?

No. It’s something more than that. And unfortunately, it’s something conservative and Republican politicians will take great risks by saying.

The truth is that Obama has figured out something FDR stumbled upon 80 years ago but never really understood – namely, that a poor economy is the FRIEND of socialism. And because it is, a socialist in office can consolidate support by creating a stagnant economy with an ever-growing public sector and an ever-growing dependent class.

Real wages are down in this country. They’ve fallen by some $4,000 per year since Obama took office. But that’s less of a problem than the fact eight million less people are working than were working when he was first inaugurated.

You’d address the eight million before the $4,000, wouldn’t you? It would appear obvious that when so many people can’t find jobs you’d want to prioritize policies that get as many people a paycheck as possible – even if those paychecks were small – so that they could at least be working, right? Particularly in the case of the young, and minorities, and folks who lack marketable skills – in most cases they’re only going to get those skills by joining the workforce.

Instead, Obama offers up a monster increase to the minimum wage. He offers up a $1.75-per hour mandated hike which, if it were enacted, would wipe out millions of low-skill jobs on the one hand and jack up consumer prices on the other, as companies who employ low-skill labor would recoup that cost increase by passing it along to the consumer. The last minimum wage increase, passed in 2009, was smaller – and it has had that effect.

Increasing the minimum wage hurts poor people. It makes for fewer jobs for poor people. And a job is a place on a rung on the economic ladder; without one you can’t climb. You don’t go from your parents’ couch to a six-figure income without something fortuitous and rare happening.

Obama’s not stupid enough to think otherwise. He knows the net economic effect of a massive hike in the minimum wage won’t be positive.

But that’s not his aim. His aim is twofold. First, he knows Congress won’t pass that increase, so by offering it up he’s taking a shot at positioning the GOP-led House as not caring about poor people. They’re standing against giving you a raise when everything’s so expensive, right? Who would do that but someone who hates you?

But there’s more to this than cheap demagoguery. Obama’s also offering up that minimum wage increase because if he gets it, it will be HARDER to come up from nothing in America. It will be MORE difficult for the poor to enter the middle class.

Obama, and his people, realize that what they have an opportunity to do is change the demographic profile of the electorate. Crush the establishment of new businesses, and you close off the possibility of people joining the private sector and the entrepreneurial class. Do that and you can marginalize – perhaps permanently – the economic message of the Republican Party.

Ever notice that the Left’s reaction to any conservative politician who offers a free-market economic message is how old and tired that message is? It’s what they always say, and it’s not an accident. They’re trying to make entrepreneurship and free enterprise into quaint and antiquated concepts, just like they’ve made things like traditional marriage and kids abstaining from pre-marital sex into quaint and antiquated concepts. And they’re pursuing policies which make reality out of their rhetoric.

Obama is driving up the cost of doing business for every small, entrepreneurial firm in the country. With Obamacare he’s made it largely impossible to grow from a small firm to a medium-sized firm. Environmental regulations, workplace regulations, tax increases, a maze of permits and the Byzantine tax code present a numbing challenge to anyone who wants to open or expand a business. Not to mention the fact that since the government is borrowing the better part of a trillion dollars a year, the effect is to make it nearly impossible to get a loan to expand your business; all the money is already loaned out by the time the little guy can ask for any.

And now he wants to tell that struggling small business which can’t afford to pay its lowest-skilled employees much that it has to come up with another $1.75 per hour for each of them.

A policy like that only keeps people out of the private sector. It only keeps them under the government’s thumb. Where Obama wants them.

Alexis de Tocqueville wasn’t the first to recognize that the death of democracy would come when a majority of the people recognize they can vote themselves money out of the public till, but he might have been the most famous to offer that analysis.

Obama knows this, too. And he wants to take advantage of it by driving the population into de Tocqueville’s destructive majority. What’s more, he recognizes that if he’s called out for blocking an economic recovery the media will trash those who make such an argument as conspiracy theorists.

But this isn’t a conspiracy theory. It’s simple deduction. The president’s message appeals to poor people, his policies don’t help poor people avoid being poor, current conditions as a result of those policies are that the country is getting poorer and he’s not modulating those policies. And we know he’s not stupid.

Therefore he wants more poor people, because he benefits politically from them.

Should a Marco Rubio or Eric Cantor or John Boehner or Kelly Ayotte go on TV and say this? Probably not.

And it wouldn’t hurt for the public to begin to recognize it.