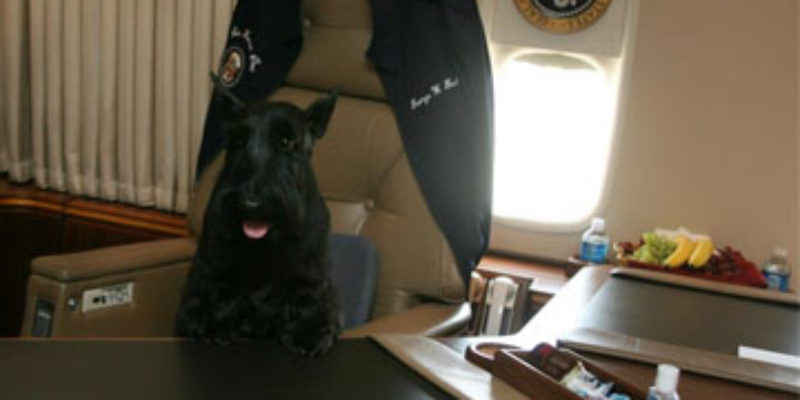 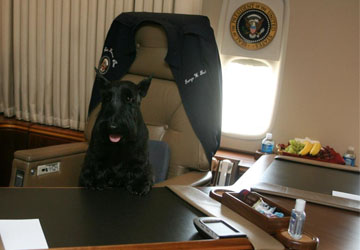 Barney was George W. Bush’s dog. He was all right.

W. put out a statement earlier today about losing Barney. It’ll tug at your heartstrings a bit…

Laura and I are sad to announce that our Scottish Terrier, Barney, has passed away. The little fellow had been suffering from lymphoma and after twelve and a half years of life, his body could not fight off the illness.

Barney and I enjoyed the outdoors. He loved to accompany me when I fished for bass at the ranch. He was a fierce armadillo hunter. At Camp David, his favorite activity was chasing golf balls on the chipping green.

Barney guarded the South Lawn entrance of the White House as if he were a Secret Service agent. He wandered the halls of the West Wing looking for treats from his many friends. He starred in Barney Cam and gave the American people Christmas tours of the White House. Barney greeted Queens, Heads of State, and Prime Ministers. He was always polite and never jumped in their laps.

Barney was by my side during our eight years in the White House. He never discussed politics and was always a faithful friend. Laura and I will miss our pal.

That sounds a little like you’d expect it to if Dana Perino had written it for the former President. In any event, well done. Barney sounds like a good little dude. And our condolences go out to the Bushes, because losing the family dog hurts a hell of a lot more than you’d think.

Interested in more national news? We've got you covered! See More National News
Previous Article All Together Now: Awwwwwwwwww
Next Article The Best Ad Of The Super Bowl Might Have Been…