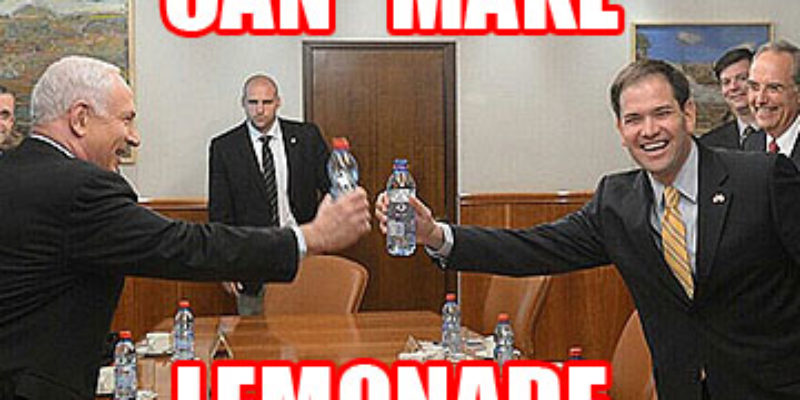 MacAoidh went ballistic on Rubio’s staffer who sexed-up the pooch that night he did the SOTU response, makin’ the whole ONOZ! RUBIO DRANK UP SOME WATER! thing a…thing. And he wasn’t wrong on that. Even now, nobody can tell you one word Rubio had to say in response to Obama’s BS. Which is too bad, because what he had to say made Rubio a helluva lot better guy to be runnin’ the country than the guy we got.

But Rubio’s done pretty good in makin’ lemonade from those lemons. And then drinkin’ that lemonade.

First there was the Rubio water bottles his PAC has been sellin’. They’ve pulled down six figures from the folks in people buyin’ Rubio bottles. That tastes pretty sweet.

And now he’s toastin’ with Bibi, and everybody’s all smiles. Big smiles.

That look on both of their faces just screams out “Suck on this, Obama. Suck on this, MNSBC.” That guy Maddow probably’s feelin’ a little dry throat lookin’ at that pic.

Rubio got his butt kicked on the immigration thing. The cottonmouth thing wasn’t great.

But guess what? He’s still standin’, and he’s still smilin’. The GOP is full of politicians with glass jaws. Rubio ain’t one of ’em.

He might be our guy in 2016, he might not. But at least he can take a punch, along with a drink of water. 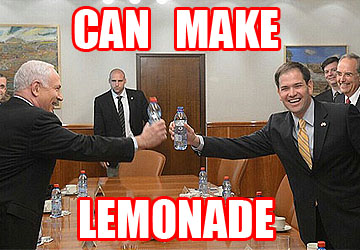 OH, BY THE BY: That Coolidge book that came out last week?

Read it on the Kindle over the weekend.

It’s got a lot of good stuff in it.

Maybe the best thing in it is actually kinda relevant here.

Seems that toward the end of the time Silent Cal was president, he made a trip down to Cuba since he was doin’ some diplomatic stuff with them. They didn’t have any Castro-type people in Cuba at that point, and Marco’s people were still down there sippin’ Mojitos instead of mixin’ ’em at a banquet someplace.

But here’s your kinda interesting thing. Coolidge, the fiscal hawk guy and Best Conservative President Evah, goes down to Cuba and they love him down there.

Coolidge had red hair. Guess what the nickname the Cubans gave him was?

So they send us a Rubio, who’s a fiscal hawk who might take office as president in 2017 with an economy and a budget situation that’ll look just as bad as the one Coolidge got.

You can take that story if you like, chew on it some and then go hit InTrade with it. They’re givin’ Rubio a 15 percent shot at the nomination right now.