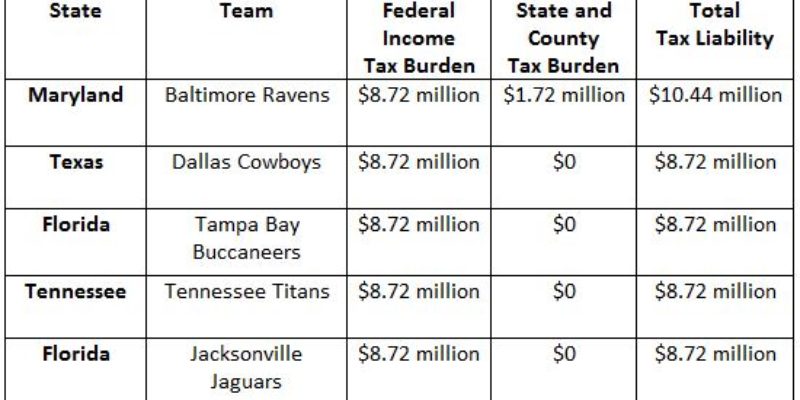 As reported this week, Super Bowl MVP Joe Flacco and the Baltimore Ravens have agreed to a six-year, $120.6 million contract making the star quarterback the highest-paid player in NFL history, earning an estimated $20.1 million per year. But being the “highest paid player” and earning the most after tax pay are two very different things.

By choosing to remain a Raven, Flacco is now set to pay a combined marginal income tax rate of 51.98 percent. This overwhelming tax rate is composed of the federal, Maryland, and Baltimore County income tax rate, as well as the Medicare tax. And that’s excluding his “jock tax” liability for away games – play the Patriots at Gillette Stadium, pay Massachusetts income tax on earnings for that game – and other taxes levied against him such as Maryland’s property tax.

Given that Flacco is coming off of his best season, the franchise quarterback could have commanded a similar contract from any other team in the league while keeping a greater percentage of his contract. Four of the nine no-income-tax states have professional teams in need of the Super Bowl MVP’s caliber and skill. 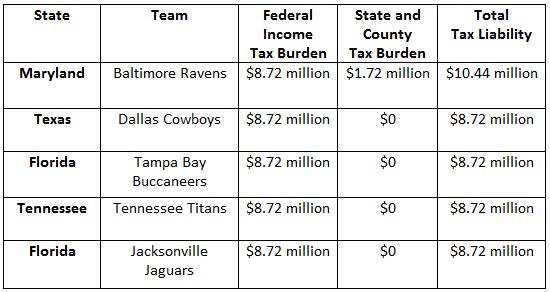 The Federal Income Tax Burden listed above is composed of the 39.6 percent tax bracket and 3.8 percent Medicare tax. For illustrative purposes, the marginal combined tax rate of 51.98 percent (which includes Federal, State, Medicare, and Baltimore County tax rates) is applied only to his contract salary and does not take into account his bonuses, endorsements, and other sources of viable income.

Had Flacco sought a new contract with one of the teams listed above, he would have saved $1.72 million in total marginal tax liability. Flacco may have the distinction of being the highest paid player in NFL history, but New Orleans Saints’ QB Drew Brees still earns more after tax pay.

Brees’s contract, which he signed before last season, is a 5-year, $100 million dollar contract that pays around $20 million per year. After applying the marginal combined tax rate of 49.4 percent to the Saints QB’s contract salary, he stands to make $470,000 more after tax pay than the newly crowned “highest paid player.” Consider how much more Brees will earn if Louisiana Gov. Bobby Jindal successfully eliminates the Pelican State’s income tax. Don’t be surprised if players begin to consider their tax liabilities even more now when making the decision of which team to ultimately sign with.

Yes, the Ravens may have the personnel to repeat as Super Bowl champions next year after signing Flacco to his new deal, but football careers are relatively short and Flacco is not receiving the greatest return for his physical investment in the game as he pursues his second championship. For now, by virtue of living in tax-heavy Maryland, he’ll just have to settle for being compensated second best.