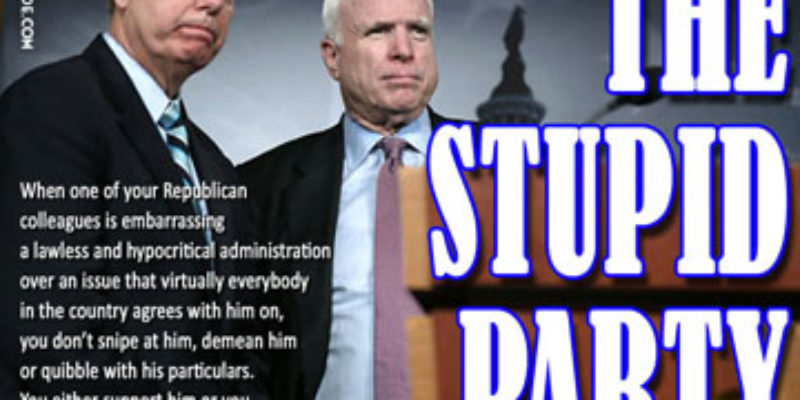 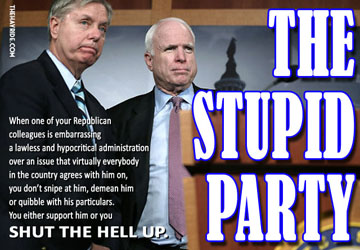 There’s an old adage that some people get ahead by having a certain amount of “pull” with any incumbent system and others, such as I say, they get ahead by applying suction to any particular body part proves to be affective. Such would be the case when watching the old guard in the Senate (McCain and Graham) as they scold Rand Paul for making more effective headlines. The suction they once employed to get ahead has broken its hold.

The Old Guard is upright, uptight, and lock-stepping in the political scatology keeps government from moving forward in service to the people. They’re stuck where it’s clear they’ll always be in power until somebody drops dirt in their faces and mutters inane commentary about their patriotism. Paul, Cruz, Rubio and the like stand ready to move into place when McCain and Graham are done because the three junior senators know something the elders don’t: The elders aren’t immortal as they believe.

Rand Paul took a stand. This is unpopular with Graham and McCain because he’s getting more positive press than they. They had dinner with Obama. They also appear as turncoats to many fundamentalist conservatives. The fundamentalist conservatives no longer accept the prospect of going along to get along. It serves no purpose to maintain a system producing NO victories for people expecting government to be the servant of people and not their master.

The Old Guard would best be described as: a sentry, musket primed to challenge any enemy with the charge: “who goes there”? They answer: “it’s just us”. And the Old Guard, senile and suffering from the dementia engendered from believing their personal press releases, accepts the answer without further challenge. After all; “it’s the way we’ve done it for years”!

The New Guard is monitoring the realities of the political realm. They send out intelligence gathering teams to assess the truth of the enemy’s positions and armament capable of creating problems for their constituents and the country as a whole. They accept nothing at face value. They challenge the enemy to explain the historically proven, threatening postures noted before an attack is made and the effects are understood too late to avoid casualties.

The Constitution and the Bill of Rights are constantly under assault from this administration. Still people like McCain, Graham, Boehner and now Ryan appear ready to sell out America for less than thirty pieces of silver. It appears the going rate is a golf outing and an expensive dinner on the peoples’ credit card.  The aforementioned Senators and Representatives are welcome to challenge the observations at any time.

Rand Paul Filibustered the appointment of John Brennan to be CIA Director. It was a political statement made over a 13 hour period. It was a stand appealing to the consciousness and conscience of the American People: we have a problem. It’s a problem noted when the Attorney General says the President can order an American citizen may be killed by Executive Order and in violation of ALL American’s citizens to trial by jury, specifically on American soil.

Lindsey Graham said asking whether the president may kill Americans on American soil, “is a ludicrous question”. “I do not believe that question deserves an answer,” Mr. Graham said.

Is it really Mr. Graham when the present resident of the oval office has no problem proclaiming to the American people he’ll use Executive Privilege to bypass Congressional powers anytime he feels they move too slowly for his liking; especially when they move in opposition to his wishes? Graham; are you really that stupid?

It would appear so. And appears John McCain is just as dumb.

McCain said: “The country needs more senators who care about liberty, but if Mr. Paul wants to be taken seriously he needs to do more than pull political stunts that fire up impressionable libertarian kids in their college dorms. He needs to know what he’s talking about.”

In response to McCain I would have to say this: at least Rand Paul and his compatriots have a pulse. And it’s those Libertarian kids will be voting long after your traditionalist, voter unresponsive butt’s spitting topsoil.

Interested in more national news? We've got you covered! See More National News
Previous Article Where Was Vitter?
Next Article SARGE: The Lion Passes Into Shadow