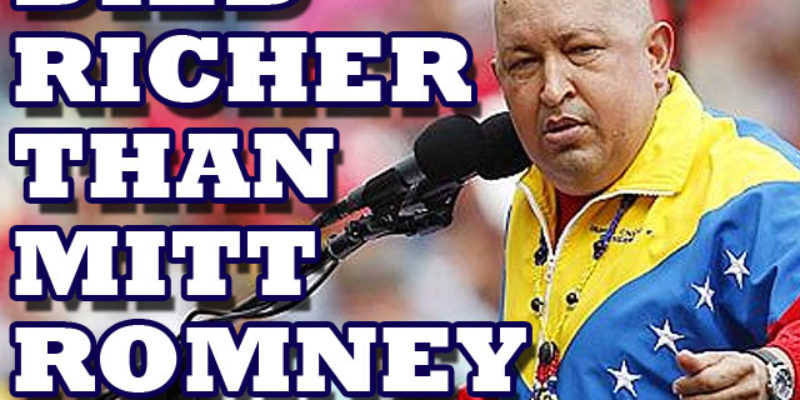 Naw, that can’t be right.

Well, maybe it is. These fellers think so…

Criminal Justice International Associates (CJIA), a risk assessment and global analysis firm in Miami, estimated in a recent report that the Chávez Frías family in Venezuela has “amassed a fortune” similar to that of the Castro brothers in Cuba.

According to Jerry Brewer, president of CJIA, “the personal fortune of the Castro brothers has been estimated at a combined value of around $2 billion.”

“The Chávez Frías family in Venezuela has amassed a fortune of a similar scale since the arrival of Chávez to the presidency in 1999,” said Brewer in an analysis published in their website.

Mitt Romney is indisputably a very rich man. And if he is elected president on Nov. 6, he will become one of the wealthiest people ever to hold the office.

But exactly how wealthy is Romney? The figure that gets tossed around is $250 million in net worth — meaning the total value of his assets, financial and others, minus any debts.

It’s a big number, but frankly, it seems low. Given the industry in which he made his fortune (private equity), the era when he made it (the 1980s and 1990s) and the wealth of his peers in that business (mostly billionaires), Romney should be worth a good bit more than that.

So Hugo Chavez was like eight times richer than Mitt Romney when El Presidente go to see El Diablo.

And Mitt Romney’s the greedy guy. Because Mitt Romney spent his life workin’ with people to come up with products and services folks would want to voluntarily pay their money to get.

That’s greedy. But the cat who uses guys with guns workin’ for a government to take property of other folks who didn’t voluntarily give it and put that property in his personal stash…that guy’s not greedy like Romney is.

The Instapundit dude has this one right…

@mmflint He stole a billion dollars while jailing, killing, and silencing opposition.Can see why you admire him.Putz.

I gotta tell ya…I’m glad that Hugo went down for the dirtnap. And not because he was a piece of poo, though that’s reason enough.

I’m glad he went down for the dirtnap because now that he’s dead and it comes out he’s rooked TWO BILLION ZAMOLEANS from those poor people in Venezuela lyin’ bastards like Danny Glover, Sean Penn and Fat Mike Moore flapped their yaps about his supposedly savin’, said lyin’ bastards now have a real mess on their hands.

So does Ed Schultz and that guy Maddow, who won’t shut up about rich billionaires. That stiff down in Caracas stinks all the way to New York for them, don’t it? 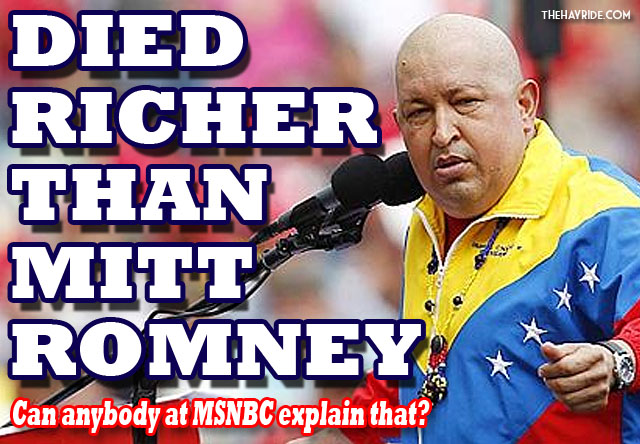