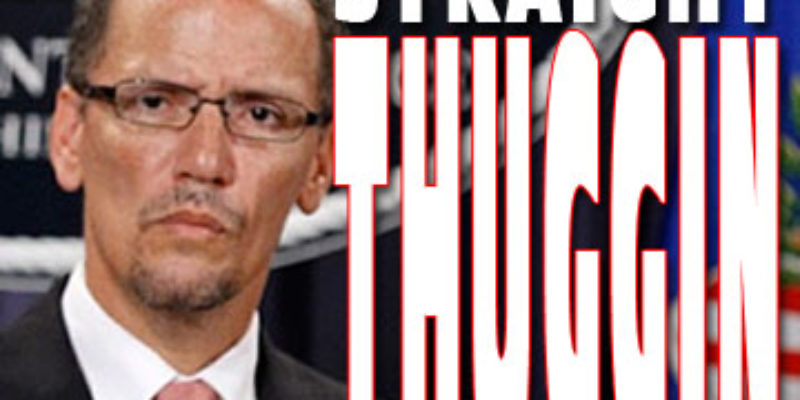 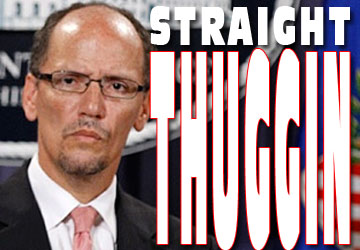 Earlier this week when President Obama announced the abominable Thomas Perez as his choice for Labor Secretary, Sen. David Vitter publicly opposed the choice and declared he would block Perez’ nomination. Vitter went on Greta Van Susteren Monday and explained his protest of Perez as based on the latter’s instigation of a frivolous and abusive lawsuit against the state of Louisiana under the Motor Voter law, in which a state where some 84 percent of eligible adults are registered to vote (4th in the nation) somehow doesn’t register welfare recipients to vote with sufficient vigor at the offices where public benefits are dispensed.

Raising awareness of Perez’ actions – he’s currently the head of the Department of Justice’s Civil Rights Division, which is prosecuting the DOJ’s suit in Louisiana – would seem to be a goal all of the state’s public officials would wish to share. But as of Thursday morning, Vitter has been joined only by Rep. Bill Cassidy in publicly opposing Perez.

And this has the Senator more than a little irritated.

Yesterday, something of a behind-the-scenes donnybrook ensued between the staffs of Vitter and Tom Schedler, Louisiana’s Secretary of State. Schedler is the main target of not just Perez’ lawsuit but a different case, filed by the NAACP and Project Vote, in New Orleans. It seems that despite the glowing 84 percent voter registration figure, it’s alleged that because voter registration at public assistance offices in Louisiana is down precipitously over the past decade the state cannot be in compliance with the Motor Voter law; the fact that at 84 percent Louisiana has registered virtually everyone who wants to vote and is down to signing up 18-year olds who show up at state offices isn’t a sufficient explanation.

As such, one might imagine Schedler would have more motivation to raise public awareness of the rather unsavory, partisan and abusive nature of the litigation in question and exact the highest political price possible for the Obama administration, in the person of Perez, for subjecting him to it.

But he hasn’t, and Vitter’s people are miffed. They see it as a missed opportunity, and they’re suspicious that petty political motives might be behind Schedler’s failure to back the Senator’s play. It seems Schedler and Vitter weren’t great friends in the state legislature years ago, and the relationship didn’t improve much when Vitter backed Jim Tucker in his bid to dislodge Schedler as Secretary of State in the 2011 elections. What’s more, Schedler’s perceived alignment with Lt. Governor Jay Dardenne – Schedler was Dardenne’s deputy as Secretary of State and ascended to his current post when Dardenne was elected to his new office in 2010 – would mean he’s not going to give Vitter any help in the public eye in the event Vitter and Dardenne are facing off in the 2015 gubernatorial election.

But for Schedler, the political stuff has nothing to do with it. The reason Schedler doesn’t want to fan the public flames on Perez is pending litigation and what that might to do the state’s case. For the Secretary of State it’s a question of timing.

Some additional background here: in 2011, Perez’ DOJ and the NAACP/Project Vote plaintiffs filed virtually identical (so much so as to indicate a high degree of collaboration) lawsuits against Schedler and a number of other state officials in charge of dispensing public benefits, on the bases outlined above – the DOJ suit was filed in federal court for the Middle District of Louisiana in Baton Rouge, while NAACP/Project Vote’s case was filed in New Orleans’ Eastern District of Louisiana. Both cases hit the jackpot in terms of judge selection; the NAACP drew Judge Janet Triche Milazzo, an Obama appointment, while DOJ landed James Brady – a Clinton appointee who had been chairman of the Louisiana Democrat Party during the Edwin Edwards era and who has earned a degree of infamy for his serial sparing of murderers from death row, the most famous of whom is Kevin Brumfield, who killed Cpl. Betty Smothers in Baton Rouge in 1993. Smothers’ son Warrick Dunn went on to fame and fortune as an NFL running back, meaning that when Brady saved Brumfield last year it generated no small bit of outrage among the public.

And with those near-miraculous judicial selections the outcomes of the cases have been fortuitous for the plaintiffs. The state lost the NAACP case in front of Milazzo, despite a finding that Louisiana’s agencies in question are now in compliance with federal law; Milazzo found for the plaintiffs anyway, because at some point prior to August 2011 there may have been lapses in voter registration efforts at state offices. These lapses came after a months-long campaign of scrutiny conducted by DOJ and the NAACP, and incidents were found, for example, when at a crowded welfare office, state workers may have cut corners on voter registration efforts in an attempt to process beneficiaries more quickly and cut down on the size of the line.

That ruling also contained an injunction requiring supervision of the state’s future compliance with Motor Voter. How that’s to be processed is an interesting bit of information; the Justice Department has demanded Schedler turn over Louisiana’s entire voter database for purposes of statistical analysis, and the NAACP and Project Vote want that database as well.

Having lost the NAACP case, Schedler’s camp is in dread of what will happen in Brady’s courtroom. The next hearing on the DOJ case is set for April 15. There is, or at least should be, concern that if he steps forth and joins Vitter in condemning Perez’ nomination he’ll prejudice the case in Brady’s court and maybe even end up with a gag order placed on him.

Look, Tom Schedler is an honest, earnest public servant. And his decisions here are defensible as a matter of honesty and earnestness. But Vitter’s point, which from a political standpoint is the correct one, is that Schedler is wasting a perfect opportunity to compete on the field with Obama and Perez.

Understand the context behind these suits in the first place. That is, Louisiana’s Democrat Party had a tradition of corrupting the voter rolls in Louisiana and using organizations like ACORN/Project Vote to manipulate shaky voter registrations into manufactured votes on Election Day. Orleans Parish, for example, was always the last parish to report its vote totals on Election Night, and when there was a close race the torrent of Democrat votes out of Orleans frequently submerged the Republican. And that torrent was usually augmented by a river of allegations of irregularities; the classic example of which was the 1996 Senate election in which Mary Landrieu all but stole the race from Woody Jenkins using get-out-the-vote tactics that would make George Romero proud.

But after Hurricane Katrina, things changed. The voter rolls were purged of the dead and gone, and without those names on the rolls it was no longer possible for live humans to pull levers for dead humans in such numbers in the state. Perhaps not coincidentally, the Louisiana Democrat Party is no longer viable in statewide races. And there are people on the Left, both inside Louisiana and outside the state, who would like to bring back the good old days.

The suits in question will have the effect of pressuring Schedler’s office to stand down from scrutinizing voter registration efforts by organizations like Project Vote, and thus restock the voter rolls with, for example, the offensive line of the Dallas Cowboys, the cast, crew and extras of Cecil B. Demille’s collective films, an all-star lineup of cartoon characters and various denizens of the state’s mausoleums and graveyards. Perez’ Civil Rights Division has already signaled that it will not enforce Title 8 of the Motor Voter law, which requires the maintenance of accurate and updated voter rolls. So what’s at stake here is the integrity of Louisiana’s elections process, which Perez and his gang of henchmen are working to degrade for the benefit of their political allies.

In short, this is thuggery on a Chicago scale. It is an outrage. And given that Schedler finds himself in partisan kangaroo courts in New Orleans and Baton Rouge, honesty and earnestness make him David without a slingshot on a field full of Goliaths.

Vitter sees this for what it is. Schedler, for all his virtues, doesn’t appear to. And outside of Cassidy, nobody else wants to play.

This is a shame.

Schedler ought to embrace the possibility of a gag order from Brady, and he ought to do everything he can to make a circus out of that case in Baton Rouge. Regardless of what Brady will hand down – and there can be no question but that he will find in favor of Perez – Louisiana is going to win at the appellate level. The 5th Circuit is solidly conservative in its orientation, and a case as flimsy as this one is stands no chance there. In the meantime, though, exacting the highest possible political price for the Obama administration’s misuse of the Justice Department in these cases is really the best Schedler can hope for.

That means calling out Perez and helping to generate a groundswell of opposition to his Labor nomination. It means lighting a fire under Mary Landrieu, whose identification with the plaintiffs in these suits could be a major negative when she seeks re-election next year. It means getting the Louisiana Democrat Party to howl to the Obama administration about the political destruction its efforts are causing as whites flee that party in droves and beg them to call off the dogs. It means making judges like Brady and Milazzo recognize the real-world damage their participation as partisans in efforts like this will do to their side.

And it means building support for the Republican Party in the state, which is good for Schedler, Vitter, Gov. Bobby Jindal, Cassidy, Dardenne and whoever else might be politically involved.

This is a softball. It’s political manna from heaven.

Ask yourself this – would Chuck Schumer miss an opportunity like this to embrace a microphone and push a narrative? Would Debbie Wasserman Schultz? Would Barbara Boxer? Would Al Sharpton?

Of course Schedler is a better human being than those people are. But one reason Republicans are the Stupid Party is that Schedler and too many GOP politicians like him don’t play the game with the skill of the slimeballs.

Vitter gets this, and he’s opened the door on Perez. The state’s Republican politicians have to have the sense to walk through it.