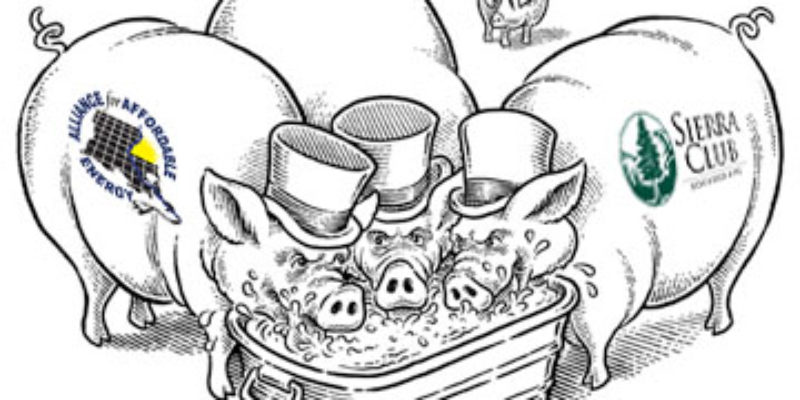 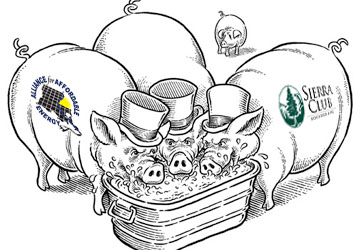 The taxpayers ought to really enjoy this. From a press release this afternoon from something called the Alliance For Affordable Energy and the Sierra Club comes news of a legal action…

BATON ROUGE, LA -The Alliance for Affordable Energy, the Sierra Club, and the Louisiana Environmental Action Network filed a petition in the 19th Judicial District Court stating that their members’ rights were violated at the Louisiana Public Service Commission (LPSC) when the newly elected Chair, Commissioner Eric Skrmetta, refused to allow public testimony during the February regular Business and Executive meeting.

Under the Open Meeting Law (1976), the Louisiana Legislature deemed it essential to the maintenance of a democratic society that public business be performed in an open and public manner and that the citizens be advised of and aware of the performance of public officials and the deliberations and decisions that go into the making of public policy. (R.S. 42:12)

A number of persons, including Petitioners Casey DeMoss Roberts of the Alliance for Affordable Energy and Jordan Macha of the Sierra Club, attended the February 27, 2013 meeting for the specific purpose of voicing their support of the Energy Efficiency Rules, including the objection to any action to overturn and vacate the Energy Efficiency Order passed in December 2012. Former Commission Chairs Foster Campbell and Lambert Boissiere Jr. urged the new Chair to allow the public the opportunity to speak. Both Commissioners Campbell and Boissiere were summarily overruled.

The Chair then asked if there were any other objections to moving forward with the vote. Petitioner Casey DeMoss Roberts commented, “I said ‘Objection!’ from the floor. I was taken aback at the swift dismissal of the public and felt compelled to protest the abnormal procedural steps. The Chair ruled that I was out of order and then called for a vote.” Ms. Roberts added, “It is my hope that this lawsuit will put the ‘Public’ back into ‘Public Service Commission’.”

To ensure the rights of citizens to participate in the deliberations of its public bodies, such as the LPSC, the law mandates that each public body shall allow a public comment period at any point in the meeting prior to action on an agenda item upon which a vote is to be taken. (Louisiana Open Meeting Law Section 14D)

“Commissioner Skrmetta clearly violated this provision of the law,” noted Petitioner Jordan Macha. “The Energy Efficiency Rules were on the agenda, and the Commission Chair made it clear that a vote to repeal these rules was to occur. By not allowing public comments, the Commission failed to uphold their most important duty – to serve the public’s interest.”

The Petitioners are asking the Court to issue a declaratory judgment asserting that the Commission’s vote on Agenda Item No. 18 at its February 27, 2013 meeting violates La. R.S. 42:14 (D) which prevents such public bodies from voting on Agenda Items without providing for prior public comment.

D.  Except school boards, which shall be subject to R.S. 42:15, each public body conducting a meeting which is subject to the notice requirements of R.S. 42:19(A) shall allow a public comment period at any point in the meeting prior to action on an agenda item upon which a vote is to be taken.  The governing body may adopt reasonable rules and restrictions regarding such comment period.

…but here’s the thing. The PSC’s “reasonable rules” say that when they’re taking up reconsiderations of previously-passed agenda items, no comment is required. Because the issues have already been commented on. And when the Energy Efficiency Rules were passed with the previous makeup of the board – before Scott Angelle replaced Jimmy Field – back in December there was lots of comment.

But Roberts and Macha just have to run to court and waste the ratepayers’ dollars in legal fees. And why?

Because the Energy Efficiency Rules passed in December were a massive rice bowl to the Alliance for Affordable Energy and the Sierra Club, and Skrmetta broke that rice bowl into shards back in February.

AAE and Sierra were going to be third-party administrators for the energy efficiency programs those rules would mandate the power companies set up, and they’d get to make a killing by going around and signing people up to get all kinds of new appliances and insulation and windows and so forth, on the power companies’ dime – which, since power companies pass all these costs on to consumers one way or the other, really means the ratepayers’ dime.

What will happen now that this $30 million boondoggle has been blown out of the water is that it will likely be replaced with a voluntary program – something whereby the power companies will sign you up to update your house with energy-efficient improvements, at no up-front cost to you, but then recoup their investment by charging you the same rate you’re currently paying until the savings cover their costs plus a little rate of return, and then once those costs are covered you see your electric bill drop off a cliff down the road.

That’s a sustainable program, but it doesn’t require the services of a Casey DeMoss Roberts or a Jordan Macha to implement. It’s a lot harder for them to wet their beak at that trough. So they’re going to scream about the ineffectiveness of the replacement program and how it screws the public and accelerates global warming or hurricanes or athlete’s foot or whatever fresh idiocy the envirosocialist crowd is pushing this month to cover for their avarice.

Remember, these are people who will howl about the “greed” of an Entergy who provides the miracle of light, electronic entertainment and air conditioning in your house in exchange for a fee but demand the right to serve as well-paid gatekeepers and middle men in a scheme mandating their role. And that’s not greed. That’s “community activism” and so forth.

My grandfather used to have an old Cajun saying at the ready when he’d see stuff like this on the news.

Translated, that means “all the hogs eat at the trough.” He was in a business where he saw political graft and its effects all the time, and it made him sick.

This would make him sick. This isn’t even honest graft, and it’s out in the open.