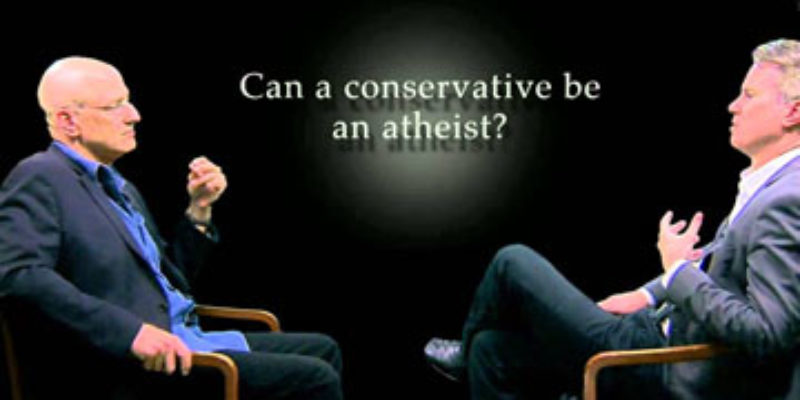 An interesting discussion, to be sure. And Klavan has it right when he says if you’re an atheist and an American conservative it’s tough to make those make sense.

More after the video…

But Klavan is correct in noting that the American philosophy which undergirds conservatism and the Constitution – namely that since man is created in God’s image and therefore the rights of an individual are natural rights which come from God and not government, and those rights ensconced in the Constitution aren’t granted by the Constitution but merely recognized – is very difficult to fully describe without some sort of at least spiritual belief.

Moreover, experience teaches us that it’s almost impossible to be a conservative and a militant atheist at the same time. You can be a militant atheist and a libertarian, though that really makes you more or less a libertine rather than a libertarian; your philosophy becomes basically that individually you’re such a genius and an all-around awesome dude (or dudette) that you don’t have to submit to any authority outside of extreme cases. We have another word for that: you’re a crank.

In general, though, the ranks of the atheists are not fertile recruiting grounds for conservatives. If you don’t believe in God then you’re more likely to believe that since man is the highest being in the universe man has the best chance of perfecting his surroundings and therefore man can create Utopia.

And Utopia is the basis of socialism, totalitarianism, progressivism, fascism and communism. It’s not heaven on earth; it’s hell.