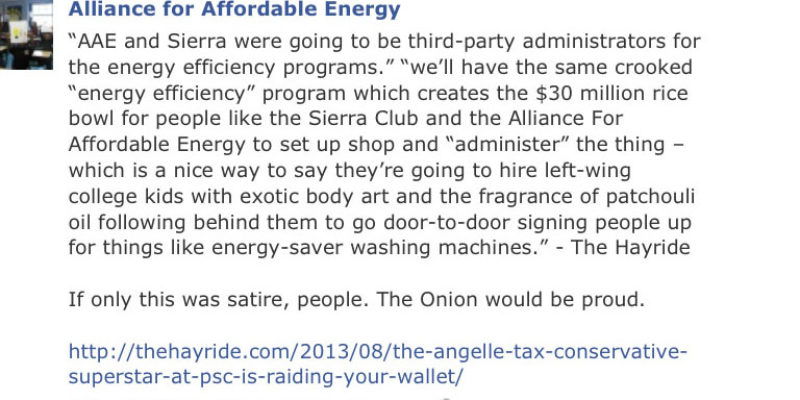 …without your consent thanks to the fantastic efforts of our “conservative Republican” Public Service Commissioner Scott Angelle last week, is in a celebratory mood. After the Commish voted with the Democrats on the PSC last week to institute a cockamamie “energy efficiency” program which will consist of raising your utility rates to pay corporate welfare to the utility companies and effectively create a slush fund for the benefit of left-wing environmentalist organizations like AAE, that is. It seems AAE is going to be a “third-party administrator” for this program, meaning they’ll get to play gatekeeper between the utility companies and their customers who the lefties will be signing up for “free” energy-saving upgrades to their homes.

And given this sudden windfall mandated by government, the Alliance For Affordable Energy put out a triumphant press release on Friday…

When the Louisiana Commission reauthorized the energy efficiency rules on June 26th, they stayed implementation pending final amendments. The most significant revision was allowing utilities to voluntarily determine whether to provide efficiency programs to their customers.  The utilities now have until October 1st, 2013 to formally file their intention with the Commission.  Fortunately, immediately preceding the vote, each of the state’s three investor owned electric utilities publicly stated that they will participate, thus bringing efficiency to the vast majority of customers in the state. While giving the utilities this discretion was a gamble, there is a potential upside to having the companies voluntarily participate.

“With Louisiana families and businesses paying among the highest energy bills in America, we can’t afford to fall further behind on energy efficiency,” says Forest Wright, Utility Policy Director for the Alliance for Affordable Energy. “On the other hand, if the utilities come to the table as willing partners, we could end up with efficiency programs that ultimately are even stronger now and into the future.  It is better for customers if everyone is pulling in the same direction with energy efficiency.”

The Alliance looks forward to expanding the impact of the new energy efficiency rules through the upcoming Integrated Resource Planning process beginning this October and by developing long term energy efficiency programs described as Phase II of the rules approved this week.

The italicized and underlined bit was ours. We’ll get to that in a second.

Of course, when the AAE people, and particularly this Forest Wright character – who actually ran against Angelle last fall and got drummed, partially due to the fact that he lives in New Orleans and not in the district – found out about our characterization of this program in not-quite-so-sanguine terms after what Angelle’s PSC colleague Clyde Holloway termed the Angelle Tax was passed, they became a bit less jovial. There was this… 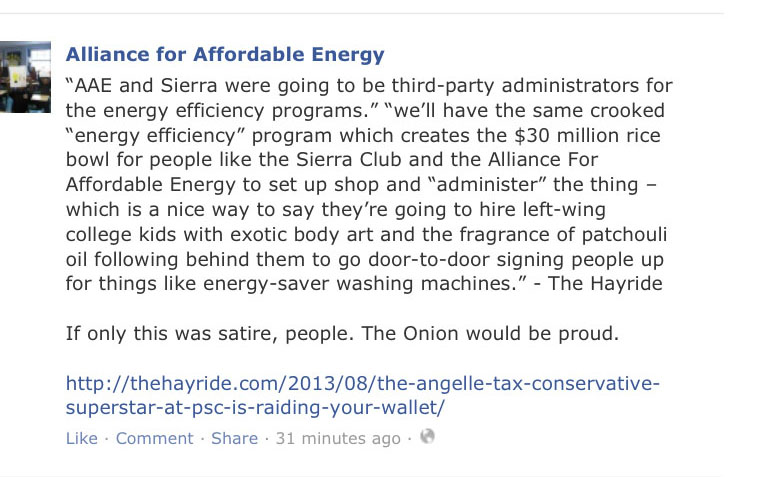 Wright just can’t believe people would say such things about him.

And you can believe him when he says that’s not what this program will look like at all.

Because he’s a really credible guy. Seriously, you guys.

Hey, remember that line we emphasized from his press release? “With Louisiana families and businesses paying among the highest energy bills in America, we can’t afford to fall further behind on energy efficiency…“?

Get ready, because this is going to shock you.

Louisianans don’t pay among the highest energy bills in America. Not by a long shot.

In fact, ours are among the lowest energy bills in the country.

Ever heard of the Edison Electric Institute? It’s more or less the gold standard where it comes to data on the utility industry. And most of the really good data EEI comes out with is protected behind a member firewall. Like rate information, for example.

But we’re such big shots we can pierce that for you. Sort of. Florida Power and Light used EEI rate data to put together some rankings, largely to highlight where they stand, and we’ll use those to show exactly how right Wright is.

As you can see, Wright is wrong… 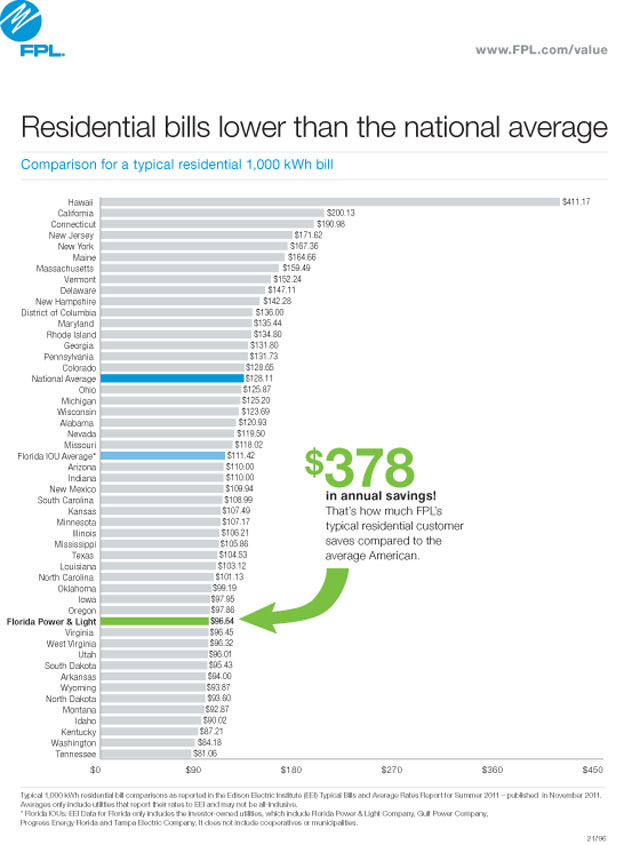 Sixteenth from the bottom in cost per kilowatt hour among the states. And half of what they pay in California.

Oh, wait – would you like to see how Louisiana stacks up in the winter? Just for goofs… 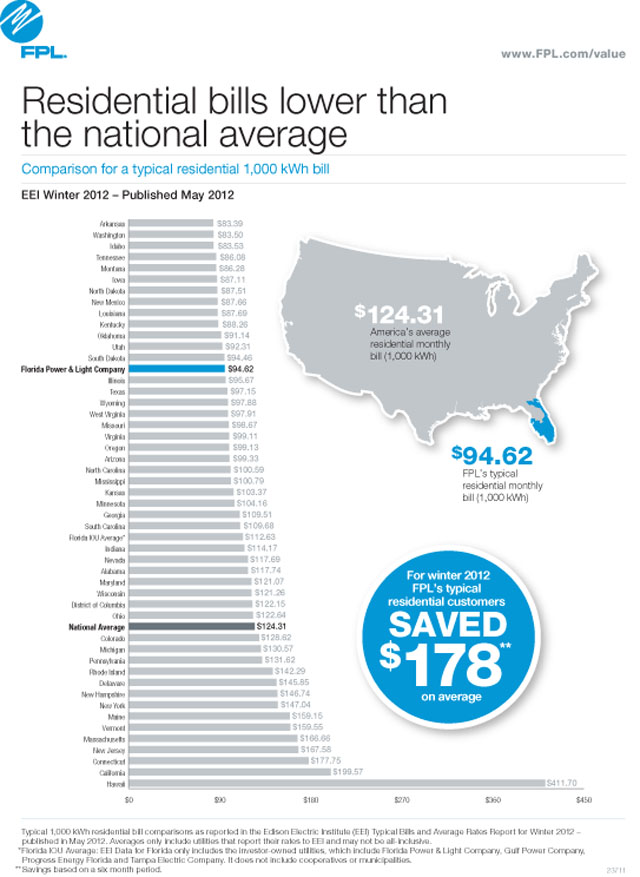 Eighth from the bottom in the winter.

This guy tells provable lies. He does it in a written press release. Just blatant, obvious, conspicuous lies. And then he has the nerve to say that what is about to happen on your ratepaying dime is satire worthy of the Onion.

Ehhh, not so much. When you have to lie to justify your existence after pushing a program that insinuates you into the electric bill of unsuspecting and unconsenting people, you don’t have a lot of credibility to disparage anybody else.

Forest Wright got blown out by the public when he tried to get power over your electric bill through legitimate means. When that failed he managed to dragoon Angelle, who has shown himself to be a Useful Idiot for both the power companies and the environmentalist Left at your expense, to find a place at the trough.

Just remember that when the hipster kid with the bone through his nose shows up at your doorstep to tell you what an awesome idea it’ll be to have the new energy efficiency plan buy you a new washing machine, or more insulation in your attic. You’re already paying more for it anyway.

Interested in more national news? We've got you covered! See More National News
Previous Article SKRMETTA: Energy Efficiency – When A Fee Is A Tax Is A Slush Fund
Next Article Is Scott Angelle Dodging Ratepayers’ Questions?