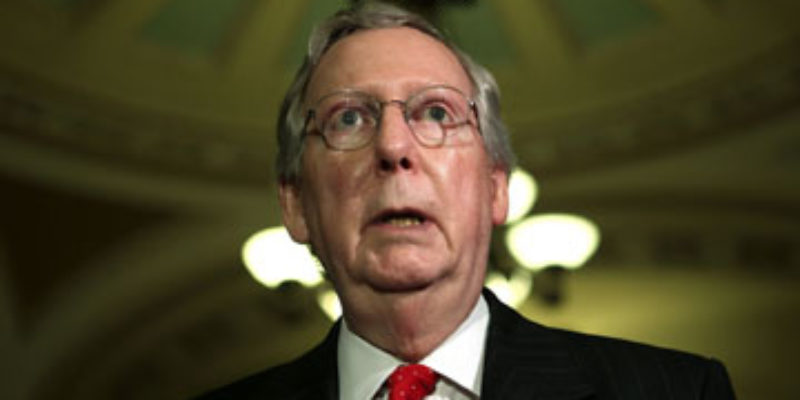 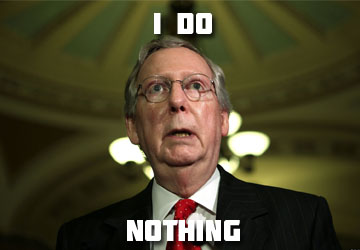 …and the Senate GOP leadership is now whipping their vote against Cruz’ plan to filibuster Harry Reid putting Obamacare back into the budget.

As a result, Reid will get the Senate to vote to fund Obamacare with only 51 votes.

McConnell said he would not block the bill from coming to a final vote because it includes language to strip funding from President Obama’s signature healthcare law while keeping current government funding levels in place.

“Sen. McConnell supports the House Republicans’ bill and will not vote to block it, since it defunds ObamaCare and funds the government without increasing spending by a penny,” said a spokesman for the GOP leader.

That statement is ridiculous on its face. It makes Cruz’ position sound like he’s opposed to the House bill, when in fact what Cruz is doing is to preserve the bill – and force Reid to present it to the Senate as is.

Which Reid will not do. He will amend the bill to put Obamacare into the budget, and he can get 51 votes for that. What he can’t get is 60 votes to beat a filibuster, so long as McConnell and the leadership stand strong.

Here’s how strong McConnell is…

McConnell pledged to vote against any amendment pushed by Senate Democrats to take the provisions to defund ObamaCare out of the bill.

“He will also vote against any amendment that attempts to add ObamaCare funding back into the House Republicans’ bill,” said McConnell’s spokesman.

He’ll vote against the amendment. He won’t filibuster against it. So he votes and the Republicans lose the vote, and Reid gets what he wants without having to give up anything.

McConnell seems to think that somehow he can convince Democrats to join with the GOP and deny Reid his 51 votes to put Obamacare back in the budget. And Ted Cruz is the unrealistic one!

And then the Senate CR goes to the House on Sunday, with the House having only 24 hours to accept it or be blamed for the shutdown since the hot potato will be in their hands when the budget deadline hits.