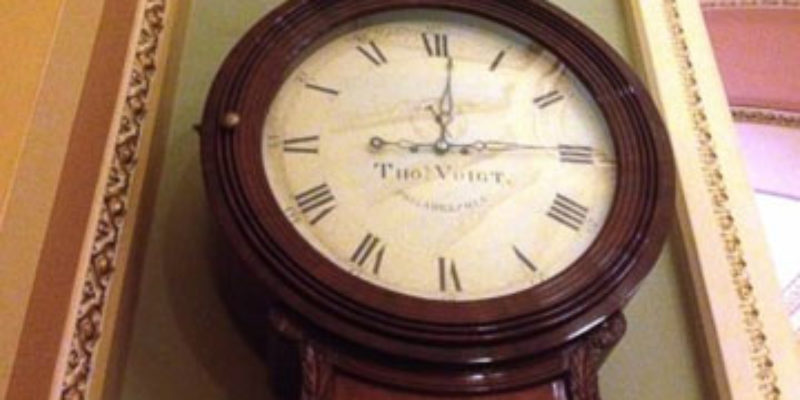 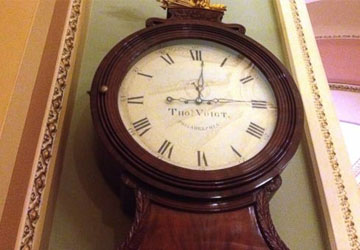 One of the more interesting sidelights of the federal government shutdown has been news coverage of the 11-foot tall, nearly 200-year-old Ohio Clock outside the U.S. Senate Chamber on Capitol Hill. The clock quit ticking, and that symbolized what is so wrong with shutting down a government that has serious responsibilities to fulfill for the people it serves.

Keeping a clock running isn’t at the top of the list, but it helps explain that a government shutdown stops more than clocks. Take the Centers for Disease Control, for example, where important researchers were furloughed. There are people’s lives hanging in the balance, but they have been denied medical trials that could work miracle cures for serious illnesses. The fact that a number of those citizens are children makes the shutdown extremely cruel and hard to swallow.

The clock in the Senate corridor has captured the attention of major news outlets, and they have used it to explain the futility of the shutdown. It stopped ticking at 12:14 p.m. Wednesday, Oct. 9. One report said a number of other historic clocks in the Senate (at least 10) also stopped, including a timepiece in Vice President Joe Biden’s ceremonial office.

The Ohio Clock has a long and storied history, and some of it is questionable.

Sen. David Daggett of Connecticut ordered the clock in late-December of 1815 from Thomas Voigt, a Philadelphia clock maker. It was delivered to the Old Senate Chamber in 1817 and was moved to its present location in 1859.

Senate.gov says “this richly-engrained mahogany clock is one of the most recognized pieces of furniture in the Capitol.” It is called the Ohio Clock, but no one seems to know why, the website said. The shield contains 17 stars and 17 stripes, and some think that’s because Ohio became the 17th state. However, Louisiana (1812) and Indiana (1816) were admitted to the Union by the time the clock was commissioned.

“… Another theory rests upon an 1897 ‘Harper’s Weekly’ illustration, showing Ohio Sen. Marcus Hanna posing near the clock,” the website said. “Unfortunately, no evidence has been found to confirm that Hanna’s stance near the timepiece was anything but coincidental. Still, for a reason yet to be discovered, the clock is named for the state of Ohio.”

One of the most colorful stories about the clock says it was frequently used by senators during Prohibition to hide illegal liquor in the clock’s tall case. However, Diane K. Skvarla, the Senate curator, said in 2010 — when the clock was being renovated

— that there is no evidence that actually happened.

Some reporters did acknowledge keeping liquor in the clock when they were temporarily stationed in the corridor in the late 1940s, according to The Associated Press. Now, that is a story that definitely sounds believable.

The clock was damaged in 1983 by a blast from a bomb planted just outside the Senate Chamber. The AP said the Armed Resistance Unit took credit for the bomb as retaliation against the U.S. military involvement in Grenada and Lebanon.

News conferences and informal gatherings are often held near the clock. Reporters know “OCC” means Ohio Clock corridor, The AP said. The chimes that quit working years ago weren’t restored because they interrupted news conferences and other events held in that area. The clock is lubricated and wound weekly. Senate curators say it keeps accurate time.

The curators who wind the clocks were among the 800,000 federal employees who were furloughed during the shutdown. OK, but why can’t someone who isn’t on furlough do the job?

The AP said, “The curators are specially trained to wind historic timepieces. The Ohio Clock is nearly 200 years old, and over time, inexperienced people have sometimes wound the clock too tightly, threatening to do permanent harm.”

Bob Schieffer of CBS-TV’s “Face the Nation” talked in his Sunday commentary about the sad state of affairs in Washington, D.C., and he ended with the clock story.

Schieffer said he was surprised that a poll showed 6 of 10 Americans are so disgusted they would like to see every member of Congress defeated. He also talked about Congress denying death benefits to soldiers killed in battle and about seeing a private citizen doing yard work around the Lincoln Memorial.

“So I guess I shouldn’t have been surprised when the 200-year-old clock outside the Senate chamber finally topped ticking…,” he said.

Maybe it isn’t surprising, but how hard can it be to wind a clock? Yes, curators do it best, but with 100 senators on Capitol Hill — and goodness knows how many of their staffers — isn’t there somebody among them who would be willing and able to wind those clocks? Certainly Vice President Biden, who has loads of time on his hands, could at least wind the clock in his ceremonial office.

Negotiations to end the shutdown were ongoing Wednesday, and there was optimism it would be over later in the day. Both houses were going to vote on a deal to reopen the government through Jan. 15 and increase the nation’s borrowing authority through Feb. 7. Some tea party members indicated they wouldn’t vote for the compromise, but wouldn’t try to delay its approval.

We hope that by the time you read this the government — and the clocks — will be up and running again.