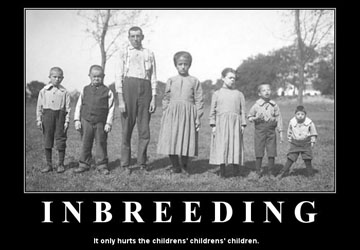 I was kicked back cussing politics when I heard a voice say something about “bloody inbred mother crumblers” (or something like that). I caught myself talking to myself; again. So, I skipped on over to my wealth of research resources sliced from the Internet holding tanks I regularly raid and found: Inbreeding.

WOW! Have you ever heard a better description of politics in your life?

Since the advent of the Progressive Political Movement, America’s been stuck with a political malady created by an illegitimate union among people of like mind. They only accept, as fact, those ideas and ideals reflecting their tho

ughts and motivations. No others are acceptable. Contrary or divergent thought must be stomped out like a kindling fire in a California drought zone. There’s no room for hybridization or blending of genetic elements could make the thought stronger, better, capable of being more productive of the common good. Because of this the entire forest could become recessive and incapable of survival.

As the recessive genes flourish governmental policy direction, procedure and their combined power stroke witnessed in the self-serving use of ever increasing numbers of regulations (and ever increasing numbers of regulators) becomes onerous. The political inbreeding assures the ideology is hammered onto the backs of the middle class no matter the political party in majority. Government works to assure government works for government.

Read the second and third sentences again: “Inbreeding results in homozygosity, (having two identical alleles of the same gene) which can increase the chances of offspring being affected by recessive or deleterious traits fitness of a population, which is called inbreeding depression.”

In politics it’s imperative the government’s genetic structure be “refreshed” or permitted to intake newer genetic influences made understandable through the development of new and better policies and procedures. The parental duo (political parties) responsible for creating new life should come together, enact legislation and move the nation forward.

Not so in Washington D.C. Both American political parties are from the same progressive family. The American political family tree doesn’t fork. It’s more a telephone pole than a tree with divergent branches pulling nutrients from sunlight, air and other weather factors. The politically inbred tree draws only those nutrients (thoughts and theories) produced from its roots, roots that soon develop a rot from overly extensive re-use of hackneyed theories. These theories try to push

stale nutrients (ideologies) to the top of the tree starving for nourishment. But, they are still pushing STALE ideas.

Remember: Government works to assure government works for government. There’s no polarity of thought between the Democrat and Republican Parties. They both work from a genetic structure designed to assure the government remains empowered. The populace becomes imperiled by their lack of governmental oversight. When Congress enabled them to set and control their salaries and privileged benefits afforded to nobody other than Senators and Congressmen; they absolved themselves of the requirement to conform to laws they pass against the people. The people became the vassals of a new aristocracy based on wealth and rejecting competence in the execution of their duties.

It seems any idiot is capable of winning by outspending the opposition where campaign fundraising is concerned. Witness the history of the Adams, the Roosevelts, the Kennedys, the Bushes and potentially the Clintons should Hillary live long enough to run.

The above mentioned clans indicate the familial mentality of government. When inspected closely, none of these clans differ greatly in their approach to governmental control, function and presentation.

It doesn’t provide much hope for the future does it if we continue on the way we have so far?

Interested in more national news? We've got you covered! See More National News
Previous Article TRASCHER: Seven Points To Make To The Anti-Columbus Crowd
Next Article BEAM: On The Winding Of Clocks And The Shutting Down Of Governments