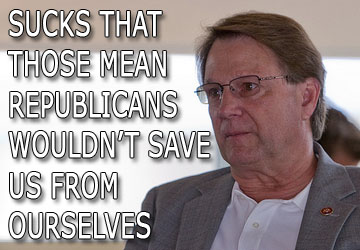 Yesterday at the Baton Rouge Press Club former congressman Charlie Melancon resurfaced from whatever it is he’s doing these days to deliver one of the more ridiculous statements you’ll ever hear. Let’s let the Times-Picayune pick this one up…

“(The health care law) has some problems. And I’ll tell you why it has some problems,” Melancon told the Press Club of Baton Rouge on Monday. “Because when I was in the Congress and we were working on the legislation that they now refer to as Obamacare, the Republican side of the aisle took the position that they would do nothing, nothing at all except try to defeat this president for re-election.”

The government shutdown and fight over raising the debt ceiling, he went on to say, are just part of the “showmanship that politics has become.” He said the impasse doesn’t really have to do with health care or the debt, but with Tea Party posturing.

“Is it race? Is it jealousy? Is it ‘I’ve got mine and I don’t want you to get yours?” Melancon asked the crowd. Pointing to his chest, the Napoleonville native added, “What you’re looking at here is becoming extinct, especially in the South.”

Stupidity bordering on insanity is a good way to describe this, of course. Republicans are supposed to stand for the principle that the federal government should have as little role as possible in the provision of health care, and Republicans are essentially if not literally united in favoring non-coercive solutions like allowing the purchase of health insurance across state lines and tort reform in order to attempt to bring the costs down and make access to the system easier for the little guy.

Obamacare goes in the completely opposite direction and is set up as a pathway to single-payer, socialized medicine. It’s philosophically noxious to anyone who believes in small government, market economics or even civil liberties. There is no way to “fix” a system which at its core requires individual Americans to purchase a product or face a government penalty; such a system is irredeemable. And there is no way to make the laws of economics disappear – the only way to insure coverage for things which have already happened, which is what a pre-existing condition is, is to spend a whole lot of somebody else’s money, and that somebody else will quickly reach a point at which they don’t want to pay anymore.

Republicans knew this from the start. On policy matters, which is a separate thing from politics, Republicans are considerably more intelligent than Democrats are. And Republicans wanted nothing whatsoever to do with the Democrats’ fantasyland healthcare plan. Why spend time polishing Obama and Pelosi’s turds?

Particularly given the fact that virtually all the principals in the crafting of Obamacare are on the record supporting a single-payer, socialized system, and that our president has repeatedly said it’s a goal of his to produce such a system. Why would any Republican willingly assist in bringing such a communistic goal to reality?

This won’t be the last time you’ll see a Democrat attempting to lay blame for Obamacare on someone other than the party which supplied every single vote required for its passage. As the rollout of this thing – as the “now that we’ve voted for it you can see what’s in it” – develops, and it’s obvious that it makes New Coke and the Edsel look like the iPhone, they’ll have to find some bogeyman on whom to pin the blame. Reason and accountability aren’t their strong suit, but spin certainly is. And while Charlie Melancon isn’t capable of making this idiocy sound good, somebody else might.

Melancon himself voted against Obamacare. He knows it’s a disaster.

But to say that it’s a disaster because not enough Republicans abandoned their principle to participate in shoe-shining this tarball is one of the most ridiculous statements anyone can make. It’s a vindication of the voters’ judgement back in November of 2010 that for whatever sins he might have been guilty of in his personal life David Vitter was far more fit to serve in the U.S. Senate than the intellectually torpid, philosophically vacant former sugar lobbyist from Napoleonville.

Interested in more national news? We've got you covered! See More National News
Previous Article We Also Have Donna Brazile…
Next Article How Long Has The Shutdown Been In The Works?