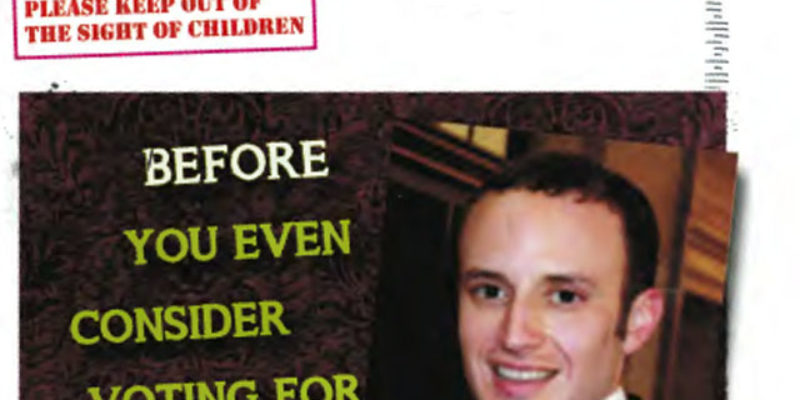 There was a guy who ran for traffic judge down in New Orleans over the weekend, and came in third. Richard Perque was a Democrat who was actually endorsed by the Republican Parish Executive Committee in Orleans Parish (all eight candidates were Democrats; Perque was seen as the least ideologically left-wing of the bunch), and he comes from a fairly prominent South Louisiana political family – his grandfather Risley “Pappy” Triche was known as one of the most colorful members of the Louisiana House of Representatives for many years.

But in an eight-person intraparty race, it’s entirely likely the campaign tactics can get ugly. And in this race, ugly doesn’t even come close to describing how bad things got.

Because someone dropped this in the mail to households around New Orleans in reference to the race for Traffic Court District “D.” 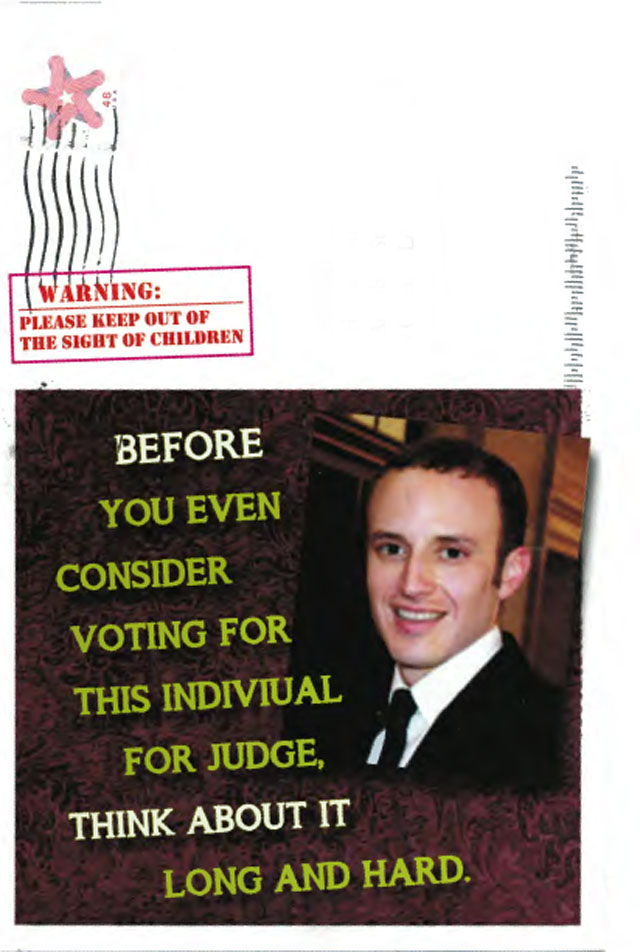 And on the flip side…

Perque came in behind Clint Smith and Steven Jupiter, who are both black. But the Baton Rouge Advocate puts suspicion on the fourth-place finisher, Patrick Giraud, who was the only other white candidate, for the Committee for Common Decency hit…

That Twitter feed spent much of its early existence in 2011 hocking spa treatments and moisturizers. In the fall of 2011, it switched to exclusively supporting the campaign that year of Traffic Court candidate Patrick Giraud. He lost, and the Twitter account tweeted nothing for two years.

Giraud is again running to be Traffic Court judge, against Perque and a half-dozen others, and on Thursday night, after two years of silence, the “New Orleans Truth” Twitter returned, blasting three dozen tweets with the photo of Perque and the other man in swimsuits.

The tweets were accompanied by various insults for both Perque and his parents.

“As a father and a brother I would be ashamed of this type of behavior. Judge worthy? NOOO,” one tweet says.

Giraud vehemently denied that he was behind the attack and said he has gay relatives and friends. He said he doesn’t even know how to tweet.

Why sink so low in a race for traffic court judge? Here’s why…

The Bureau of Governmental Research, a government watchdog group, has also found evidence that Orleans Parish in general has too many judges and that a single judge could handle the Traffic Court’s caseload. The research arm of the state Supreme Court, the so-called Judicial Counsel, is due to release a report on the state’s judiciary branch in February.

The Division D judgeship is considered a part-time position allowing a sitting judge to maintain his private law practice. Meanwhile, the position also comes with an annual salary of $111,207.

A couple of lessons here – first, don’t even consider voting for somebody who would trash somebody else’s character in so ferocious a fashion simply to win a political campaign for something as nondescript as traffic court judge. Anybody who wants that job that badly is not the kind of person you could trust in a judicial seat that already needs cleaning up…

Sholes set the special election in motion when he announced he would step down after 15 years on the Division “D” bench. During that time, the Traffic Court endured a series of investigations and arrests, including those of two employees in Sholes’ office in 2007.

The court handles between $12 million and $14 million a year in revenue collected through fines and fees. A portion of that sum heads to the city’s general fund. Inspector General Ed Quatrevaux has accused the court of mismanaging its finances. He released a scathing report in 2011 that criticized the judges for ceding too much power to their staff to dismiss or reduce traffic violations and fines. A follow-up report this year showed the court had made improvements, but still had a long way to go.

Second lesson: if you’re going to run for office, don’t take pics like that. Folks might sympathize with you when somebody kneecaps you the way it looks like Perque got kneecapped in this race, but you’ll never live it down. It’s all anybody will ever remember about you.