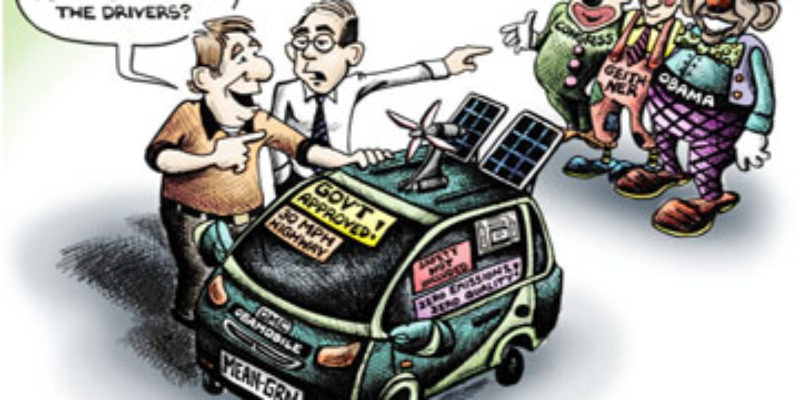 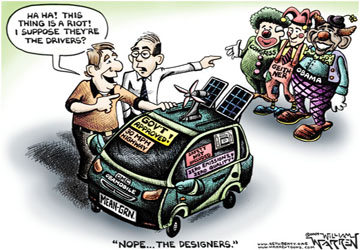 I once thought I was in America; a place where the people reigned supreme and politics was a means to an end for us. Now politics is an end unto itself and those participating feel themselves to be omnipotent, almighty, invincible and without mercy for those it’s practiced over.

Barack Obama is the Red King. Harry Reid is a joker lost in his personal insanity. Nancy Pelosi is a used up vacuum masquerading as a minority leader more a Massengill dispenser than the Summer’s Eve she represents herself to be. John Boehner’s a deep, but hollow voice emanating from the loose skin sloughing off in an apparently empty suit. They speak of fire and brimstone consequences resulting from each other’s duplicity. But they share a common goal: the power to control a nation. That’s really all this is about; who’ll act as overseer on this plantation.

The Democrats want people securely bonded to the land, each member shackled to the next while bowed to pull the weeds from the crop. The Outriders may allow some privileges from the vast stores accumulated by their union but ultimately, it’s the Outriders retire to their plantation cottages while their field workers shuffle off to The Quarters to gain no more than a drink of warm water and a cruel meal of lessening wealth and the understanding tomorrow won’t be an improvement.

The Republicans aren’t much better. Their baritone mouthpiece extols the virtues of freedom while trying to expand the planation. Republicans want greater control of the surrounding landscape to increase the yield from the lands possessed. But, they really have little more to offer the field worker; maybe some salt pork in the beans to add to the plaque forming in their arteries; maybe a more beneficent attitude displaying more cajolement than whiplash to increase productivity.

Make no mistake about it; whether Simon Legree or his antithesis seen in Arthur Shelby, the politics keeps us shackled and productive.

America is becoming a dream. It’s more a Camelot today than when Washington surveyed the western expanses of Virginia in the mid-18th century. America hasn’t lost its soul so much as its ideals have been challenged. We’re at a point of political, moral degradation. This necrosis began in our rotting compassion. We sacrificed it in favor of having more material gain while forgetting the spiritual watershed made us a nation apart and above all others morally.

Now America is hidden our children’s eyes. They see the flag as pretty cloth flapping in a breeze. It’s no longer a battle standard raised in defiance and warning to outsiders their infamy won’t stand and their goals will fail to gain fruition. We don’t teach patriotism. We instruct in base survival like defeated sheep awaiting slaughter. “Avert the eyes”. “Look away lest you be recognized as strong”. “Bow to those proclaiming themselves your better”.

There’s no Moses at the point of this spear leading us back to the Promised Land we once were described as. There’s no sharpened intellect cleaving and splitting the rhetoric lulling us into a false sleep and negligence of what’s happening. We’re being denuded of the vital and bold raiment once showed we were exceptional as a nation. When your “leaders” denigrate you for your ambition you have a serious problem.

We suggest there are polarities in our politics. It’s not true. We’re merely at a point of shadowed comparison; of differences more theoretical than substantive; more gray than either black or white. We’re no longer committed to seeing where we’ve been so we can see where we want to go; and become.

These Washington clowns are trying to drive into the center ring of this circus. The acid of their poisonous intent has etched the former crystal clarity of our windshield to opacity. They’re blindly driving to a point of collision with a tent pole.

Their final impact will bring the whole tent down upon us and what doesn’t become crushed by that circus tent’s weight will be smothered by the mass of lies they keep feeding us.

The real dangers are the clowns.