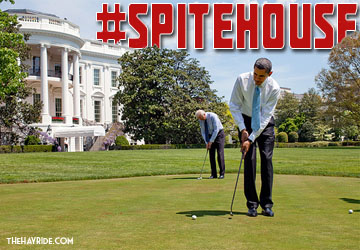 Could this one be the worst example of #SpiteHouse to date? How about the Park Rangers basically playing Idi Amin at Yellowstone?

Pat Vaillancourt went on a trip last week that was intended to showcase some of America’s greatest treasures.

Instead, the Salisbury resident said she and others on her tour bus witnessed an ugly spectacle that made her embarrassed, angry and heartbroken for her country.

Vaillancourt was one of thousands of people who found themselves in a national park as the federal government shutdown went into effect on Oct. 1. For many hours her tour group, which included senior citizen visitors from Japan, Australia, Canada and the United States, were locked in a Yellowstone National Park hotel under armed guard.

The tourists were treated harshly by armed park employees, she said, so much so that some of the foreign tourists with limited English skills thought they were under arrest.

When finally allowed to leave, the bus was not allowed to halt at all along the 2.5-hour trip out of the park, not even to stop at private bathrooms that were open along the route.

How many of these stories are out there? It seems like there’s a new one every day.

The polls on the shutdown are not what the president and his Democrat minions were expecting. While the GOP has taken a hit as well, so far the shutdown may actually be playing in the party’s favor. Erick Erickson explains…

That’s it. Slightly more people blame the GOP than the Democrats. Not an overwhelming stomping like GOP leaders feared. The public hates Washington, regardless of side, and some of the hate toward the GOP is from its own side for not fighting.

That a clear and large majority of the public disagrees with the GOP’s reasons in this shut down, but only slightly more blame the GOP than the Democrats, is a very good thing.

When the media, Republican establishment pundits, and the Democrats have all aligned to attack Ted Cruz and conservatives, but only slightly more of the public blames the GOP than the Democrats, this is a real win for our side.

The House, led by Senators Cruz and Lee, on the path of small funding bills, has shown the public the GOP is willing to be reasonable on all issues except Obamacare.

The rout that the party’s elite had feared and the Democrats had hoped for when they crafted their strategy of stonewalling the CR while attempting to inflict the absolute maximum amount of pain on the public, which has shown up in the #SpiteHouse stories across the country – interestingly enough #SpiteHouse gets furloughed for a rally on the National Mall today in support of illegal immigrants. One wouldn’t suspect the optics of barry-cading World War II vets on the National Mall while rolling out the red carpet for illegals will play any better than the rest of this administration’s actions, but as night follows day hubris meets its nemesis.

And hubris is the only way to characterize #SpiteHouse. No administration prior to this one would attempt to close an ocean, or threaten veterans with arrest at war memorials, or block off Mt. Rushmore, or put people out of their private property, or scaremongering Social Security recipients over the debt ceiling, or any of the other weird stories which have surfaced since last Monday. The president’s job, and as it happens the smart political play, would have been to keep all the parks open like they’ve been in all the previous shutdowns and thus be the good guy in this fight while decrying the crazy Republicans who are attempting to shutter the parks and government offices.

Obama has done the opposite, and thus he’s playing the role of angry tyrant who refuses to negotiate while the GOP is seen attempting to pass bills funding all the parts of the government that don’t involve Obamacare. And while Obama has #SpiteHouse, the GOP is running around with #LetsTalk. Which sounds better.

And meantime the Obamacare exchanges are an unmitigated disaster, which Obama’s minions can’t even defend to Jon Stewart. And for the people who do manage to get far enough to buy Obamacare they immediately recognize what a ripoff it is.

This is what the #SpiteHouse is defending. And slowly, as reality sinks in to the American people, the perception is beginning to take hold that Obama is willing to make people suffer for the purpose of cramming an unworkable, incompetent and draconian piece of socialism down the public’s throat.

No wonder the man occupying #SpiteHouse is seeing his popularity rating plunge into the depths. Did he think that was impossible when he crafted this idiotic strategy?