Perhaps it’s because he hasn’t had a chance to molest them first.

Too strong? Well, there’s as much evidence he’s a pedophile as there is that Romney cheated on his taxes – so there’s that. And if a lack of evidence that Romney was a tax cheat didn’t stop Reid from making that slanderous accusation on the Senate floor, then we can ram our suspicions home here, can’t we?

The stupid is strong with this one.

First, as today’s quote of the day notes, “what right” the House has to pick and choose what parts of the government get funded comes from…the Constitution, which specifically lays out that Congress, and specifically the House, is the source of all government appropriations.

Reid doesn’t have the first clue what the constitution says, apparently. Or he thinks his interlocutors in the [mostly] Democrat media don’t – and he’s probably right in that respect. But not in every case, as CNN’s Dana Bash proves in the video above.

Forget about that, though – did you hear what he said? He said he doesn’t care about sick kids the NIH can help because he has 1100 people at Nellis Air Force Base who have been off the job for two days.

Bear in mind that government employees furloughed because of a shutdown always get back pay. Those 1100 people at Nellis are on what amounts to a paid vacation right now.

The sick kids the NIH would help? No vacation. The House is trying to fund them, Reid doesn’t care.

You have to wonder about Democrat hubris where this shutdown is concerned. These people were so convinced that the public would take their wrath out on the GOP in the case of a shutdown that they actively spoiled for one – apparently not paying attention to the fact that the face of their side of the mess, at least on Capitol Hill, would be the most hated elected official in Washington.

Did they think more exposure to the public would cure that? Did they not recognize the risks of putting Harry Reid in front of the national media to answer questions about sick kids?

Obama and his political geniuses – the ones who think it’s a good idea to send cops out to the National Mall on horseback to guard against invading World War II veterans – are putting a whole lot of pressure on their friends in the media to sell this thing for them.

The National Park Service has ordered the closure of a Virginia park that sits on federal land, even though the government provides no resources for its maintenance or operation.

The Claude Moore Colonial Farm announced on Wednesday that NPS has ordered it to suspend operations until Congress agrees to a deal to fund the federal government.

According to Anna Eberly, managing director of the farm, NPS sent law enforcement agents to the park on Tuesday evening to remove staff and volunteers from the property.

“You do have to wonder about the wisdom of an organization that would use staff they don’t have the money to pay to evict visitors from a park site that operates without costing them any money,” she said.

The park withstood prior government shutdowns, noting in a news release that the farm will be closed to the public for the first time in 40 years.

“In previous budget dramas, the Farm has always been exempted since the NPS provides no staff or resources to operate the Farm,” Eberly explained in an emailed statement.

“In all the years I have worked with the National Park Service … I have never worked with a more arrogant, arbitrary and vindictive group representing the NPS,” Eberly said.

By the way, the RNC has just offered to privately fund the World War II Memorial for the next 30 days. Avec plaisir. 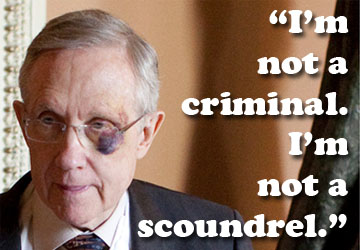