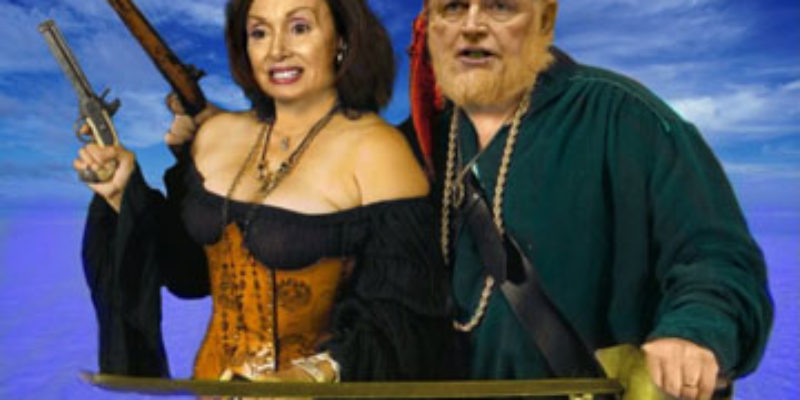 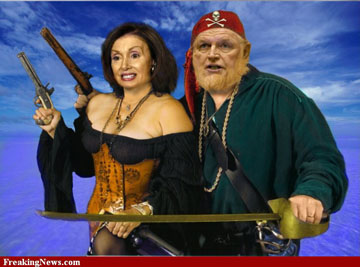 Piracy was (and is) a dynamic and dangerous industry often ending in injury or death for both side of the equation: the pirates and the pirated. The “Golden Age of Pirates” (1650 – 1720s) was directed by the conduct of economics as ANY form of warfare is. The vessels used were many times the mightiest available, while at other times a large rowboat sufficed to get the job done. We’ll deal with the “mightiest available” as we’re going to equate piracy to its closest equivalent industry: POLITICS.

Sailing ships operate as a result of riggings using the attached surface area of sails to wind-propel the ship.  The word’s derived from the Anglo-Saxon “wrigan” or “wringing” meaning “to clothe”; as its gerund or present participle becomes: rigging. This precise apparatus consists of masts, yards, sails, and cordage.

When the root of riggings (rig) is used as a verb, the definition morphs to mean: manage or conduct (something) fraudulently so as to produce a result or situation that is advantageous to a particular person.

The propulsion of sailing ships and politics is conducted by harnessing the wind. It’s no more than setting the riggings to gain the wind’s best value to get where you want to go. As the main activity of piracy was conducted in stable and warm weather latitudes, warm to hot air was found to be the best propellant. (Still sounds like politics doesn’t it.) Cold air; crisp, high velocity and directed from the north raised the seas. Ship-to-ship combat and capture was difficult. The pitch and roll of the ships couldn’t be controlled.  Pirates and their prey needed stable seas where the victor could board, battle, seize and transfer the ill-gotten gains.

The pirates’ riggings were set to resemble those of the ship being pursued. Where politics is represented by the deck of the ship, the masts (goals) represent the solid skeletal structure the issues are lashed to. These lashings (dogmatic issues) hold the numerous sheets stitched together in the form of sails. The masts and yards (horizontal pole-like structures) expand the surface area of the sails and allows for the capture of the greatest amount of wind. The more surface area capturing the wind, the more speed and power is developed by the pursuit ship.

In our modern political contests the riggings are as intricate as any 18th century sailing ship. The Democrats’ riggings are so similar the Republicans; the race is most often decided not by the command of the “sailing master” but by the amount of sail available. The sails equate to campaign contributions.

The greater the monetary acquisition, the better the chances of winning the political race through “laying on more sail” than the other guy. As the original gains of silver and gold were plundered from the native people of the region for transport to Europe and the enrichment of the royalty subsidizing the quest; it’s hard to decide who was the greater thief. We’re hard pressed to admire either participant in this drama but for the fact the pirates admitted to being thieves. The conquerors/politicians claimed a noble cause of spreading Christianity (along with genocidal diseases inadvertently imported to people with no natural immunity) but I digress.

The pirates needed to adjust their riggings to allow the greatest speed. The addition of what’s called a set of “studding sails” could increase the speed by as much as 10%. This proves the analogy. The more sail, the faster you go. The more money applied to a campaign the greater the chance to win. Political ideology has nothing to do with the pursuit. Both participants are thieves and plunderers.

The Republicans need more sail (money) in their riggings (Conservatism) and less ballast in their holds (outdated ideology and archaic tactical performance in debate) slowing them down while they follow a course proven to NOT intercept Democrats on the open seas. The Tea Party wants to plot a new course assuring they engage the prey successfully.

Conservatism is the deck to which the masts, spars and lashings are attached. The Republicans sails are dry-rotted, the deck consists of out-of-date wormy planks appealing to fewer and fewer people they pursue as crewmen.

No wonder they seldom win when fully engaged with plunderers like the Democrats. You never win when your ship’s falling apart and you’d rather fight your own crew.