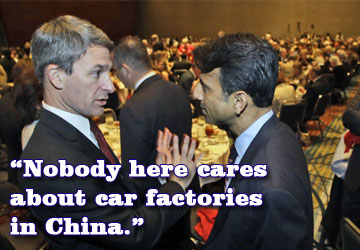 Louisiana Gov. Bobby Jindal, as head of the Republican Governors’ Association, is getting an earful – and a bit of a black eye – from people associated with the Ken Cuccinelli campaign in the wake of the latter’s closer-than-anyone-thought loss to Clinton-era graftmonger and Lincoln Bedroom pimp Terry McAuliffe in the Virginia governor’s race on Tuesday.

The Daily Caller had a bombshell of a story on the lost opportunity to knock off McAuliffe, and the blame being thrown Jindal’s way, yesterday morning…

“Bobby Jindal and his political team totally blew it,” harrumphed one advisor for Ken Cuccinelli the morning after a closer-than-expected loss.

Cuccinelli, who narrowly lost last night’s gubernatorial election to Terry McAuliffe, was badly outspent in the days and weeks leading up to the election. The New York Times‘ Jonathan Martin described Cuccinelli’s plight as having been “close to abandoned at the end.” He was. As Politico’s James Hohmann reported, ”The Republican National Committee spent about $3 million on Virginia this year, compared to $9 million in the 2009.” And as the Roanoke Times noted, in 2009, the Chamber of Commerce spent $973,000 on Bob McDonnell, but “[t]his year, the chamber gave Cuccinelli nothing.”

But it was the Republican Governor’s Association (RGA) and chairman Bobby Jindal who drew the most ire from a Cuccinelli advisor I spoke to on Wednesday morning — this, despite the fact that the RGA spent millions on the race.

It gets even worse than that.

“Bobby Jindal’s presidential campaign is over,” said the Cuccinelli advisor. “He screwed this up so bad. And I don’t know why. The campaign knew it was moving numbers over ObamaCare. And the RGA was not very far from that information, they could have obtained it themselves,” the advisor continued. “They should have given the money to the campaign to spend as opposed to running these stupid China ads. They just blew it.”

Conversely, the Democratic Governor’s Association (which actually spent less on McAuliffe) gave money directly to the campaign. This meant they could focus like a laser beam on their message — for example, attacking Cuccinelli for advocating a “war on women.” (Conversely, the advisor says because Cuccinelli’s team didn’t control much of the RGA’s money, they weren’t able to focus on hitting the ObamaCare issue as part of a closing argument.)

According to a DGA memo (authored by communications director Danny Kanner) released last night: “The DGA contributed a total of $6.5 million to the McAuliffe campaign over the last year, an unprecedented investment for the organization in Virginia. Roughly $6 million of that sum was transferred directly to the campaign, a strategic decision that POLITICO reported was the “most important” of all those made by the extraordinarily coordinated Democratic effort to win the race.”

And the DGA even went out of their way to mock the RGA’s strategy, saying: “The DGA’s wise investments stood in stark contrast to those of the Republican Governors Association. Despite laws in Virginia that allow for unlimited financial contributions and complete coordination between the campaigns and outside groups, the RGA tried to run a different campaign than their own candidate – a puzzling strategy that made both the Cuccinelli campaign and the RGA less effective.”

This complaint was echoed by the Cuccinelli advisor: ”[The RGA’s] ads were stupid. Instead of giving the money to the campaign who could spend it on ads, they were running all these ads on China — which did not move the needle. The problem is, it’s too convoluted for TV.”

The “China ads” the Cuccinelli team is grousing about are on YouTube. The main one:

But there were two other RGA ads hitting McAuliffe…

It’s a very valid critique, frankly. While there’s little question McAuliffe’s Chinese electric-car factory stinks, the answer for people who aren’t already going to vote for Ken Cuccinelli is “So what?” You can’t explain why the Chinese car factory thing has meat on its bones in a 30-second ad, or three of them. It’s probably more like a 30-minute John Stossel report before people are going to really understand what it was McAuliffe did with the car factory – or even in a general sense with his fugazi clown car company in the first place which hasn’t put a single one of those battery-powered clunkers on the road.

If what you’re trying to say is that Terry McAuliffe is a shady bastard and a crook, then say that it was Terry McAuliffe who pioneered the idea of pimping out the Lincoln Bedroom to scumbags and crooks like Mark Rich in return for campaign cash to his boss Bill Clinton. The reason that’s a winner is that when McAuliffe brings Bill and Hillary in to stump for him, all it does is reinforce the sleaze factor inherent in the guy the Democrats are trying to inflict on the Virginia governor’s mansion. “Terry McAuliffe whored out the Lincoln Bedroom for Bill Clinton’s campaign cash – don’t let him do the same to the governor’s mansion in Richmond.” That has some mustard on it – some 30-second ad about how he’s fleecing the Chicoms to build Energizer Bunny clown cars nobody will ever buy is a supreme yawner.

The fact that the RGA spent money to run those ads rather than making it rain directly on the Cuccinelli campaign, which was all but out of money at the end of the race when it actually ended up beginning to score some big points on McAuliffe and might well have been within a day or two of overtaking McAuliffe, was also a colossal gripe about Jindal’s role…

“They just took their money and spent it in New Jersey where we took a 17 point win to a 20 point win. They had a system — they had a process — that they thought was better than what Haley did. For some reason, they don’t do that in Jindal land. They run the ads themselves. I don’t know what their strategic thinking is. It just doesn’t make sense to me,” the advisor continued.

Republicans who worry about winning elections might want to take a closer look at the RGA. As the DGA’s memo boasts: “Since 2010, the DGA has won eight of the nine elections in which both organizations have competed. In nearly all of those races, the RGA has either matched or spent more than the DGA. But we spend our dollars more effectively.”

But the Republican Governors Association, and Jindal as its leader, did a fair amount to help out the campaign. The Louisiana Governor made a trip to Virginia to campaign for Cuccinelli last week. With at least $8 million in contributions, the group was also thesingle largest contributor to the Virginia Republican’s campaign.

And meanwhile the DGA is catcalling the RGA over the recent win streak they’re on. Without mentioning him by name Vermont governor Peter Shumlin took direct aim at Jindal’s management in speaking to POLITICO…

The DGA spent $6.5 million in the off-year Virginia race, a huge investment for a committee that is chronically outraised by its Republican counterpart. The Republican Governors Association spent nearly $8 million on Cuccinelli’s behalf.

Shumlin insisted that DGA would be able to remain financially competitive with the RGA in 2014 – when Christie will chair the organization – because it simply spends its money better. He pointed to the spending record in Virginia, where the DGA invested by contributing millions of dollars directly to McAuliffe, whereas the RGA divided its spending between contributions to Cuccinelli and independent ads.

Shumlin said that the RGA’s independent ads, focused on McAuliffe’s business career, “had absolutely no impact” on the race.

“It’s not just about how much money you raise. It’s about how you spend the dollars,” he argued.

So the criticism is that Jindal’s RGA is guilty of fiscal waste, bad strategy and lousy messaging more so than a lack of resources or attention.

And what that criticism really amounts to is that while Jindal wanted to help Cuccinelli, the team he used to help was ineffective.

This is where it gets interesting. Jindal uses the same political consulting firm, OnMessage, for the RGA that he uses for his own purposes. Jindal’s campaign guru Timmy Teepell works with OnMessage, though from what we gather Teepell didn’t personally have anything to do with the RGA/Cuccinelli mess.

OnMessage is one of the DC Republican political consulting firms lots of people complain about. They’ve been around for a long time, and they’ve been close to the RNC inner circle for a long time as well. Curt and Wes Anderson, the principals in the firm, have had as clients Michael Steele, Rick Perry, Rick Scott, Haley Barbour, George W. Bush, Mitch McConnell, Ron Johnson and John Thune, among others. And OnMessage has done work for virtually every arm of the Republican Party – the RNC, the RGA, the NRSC, the NRCC and the RSLC.

The way a lot of this works is that if you want to be a big player in Republican politics, particularly on the national scale, you need to hire somebody like the Anderson brothers, or Karl Rove, or SRCP Media (the founder of SRCP, Greg Stevens, was the guy who came up with the Michael Dukakis “tank” ad, which pretty much won the 1988 presidential race, and ever since that firm has been among the GOP in-crowd), or one of a few others. It’s important to hire one of the “in-crowd,” because otherwise you’re going to have trouble accessing the usual suspects among the big GOP donors or getting the right people to throw out a good buzz about you.

It’s a very clubby, who-you-know operation – and that drives a lot of people, conservative and moderate alike, nuts. Because, the complaint goes, most of these “in-crowd” consultant firms lack new blood and do the same stale messaging over and over again, failing to excite the base, failing to reach beyond a diminishing demographic and losing the communications war with boring, off-target ads that don’t resonate with 21st century casual voters.

That’s a criticism made about the Republican consultant class in general, and it’s not always on target. But in the case of the RGA and the Cuccinelli race with the “stupid China ads,” it might very well have some validity.

And as the blamecasting in the aftermath of the Virginia loss continues this week, with the criticism of the Republican establishment’s poor performance on Cuccinelli’s behalf (RNC chair Reince Priebus, who has been savaged for spending $3 million for Cuccinelli after the party spent $9 million for current governor Bob McDonnell in 2009, came out yesterday in defense of his performance and declared that the ground operation, for which the party took responsibility, was a winner – which could by implication be a way of throwing Jindal and the RGA under the bus), it could well be that OnMessage’s inability to generate a compelling or harmonious message with the campaign is a drag on Jindal’s political star.