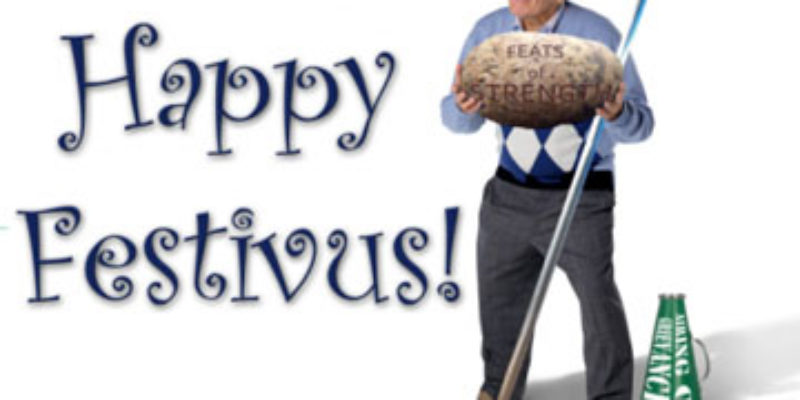 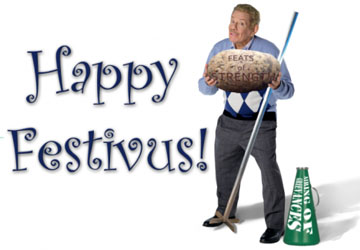 December 23rd marks the celebration of my favorite faux holiday that wasn’t made up by a felon.

And though I have not yet procured an aluminum pole (the symbol of Festivus) and do not intend on performing any feats of strength, I have many grievances to air as, like Frank Costanza, I got problems with a lot of people.

A&E – I can’t say I’m surprised by their suspension of “Duck Dynasty” star Phil Robertson any more than I am surprised to hear that the leading cause of death of North Korean officials is the country’s leader Kim Jong-Un. Robertson’s comments were crude at worst, but when has crude language ever led to someone being kept off camera. In fact that’s the key ingredient of shows like “Real Housewives of (Fill In The Media Market).” My biggest problem with A&E’s exiling of Robertson to television “time out” is that it set a standard that will be adopted by other entities by which employees can be subject to punishment for discussing or expressing support for mainline Christian beliefs. And that’s what this is really what “celebrate homosexuality” groups like GLAAD see in this: the suppression of commentary they find offensive in all areas of life.

New Orleans Saints – You spent the first 15 weeks of the NFL season in first place in the NFC South and blow it on week 16. And Who Dats have the temerity to mock Tony Romo. More on this later.

Barack Obama – I could write a series of columns on my issues with the president, but I’m going for the low-hanging fruit of his selfie at Nelson Mandela’s memorial service, which underscores how Obama often forgets that he’s a president first and America’s first celebrity second. If Obama can’t get the “being presidential” right, it should not shock anyone that he struggles so with the “governing” stuff. This is precisely why you don’t put in the Oval Office someone a only a few years removed from the state legislature.

The It’s a Small World Ride at Disneyland and Sylvania – As part of the “holiday season”, the lighting company has illuminated the façade of Disney’s pleasant boat ride through international stereotypes in puppet form. And while a keen eye will discover the hidden Disney characters snuck into the attraction and even a strategically placed bobblehead of Elvis, the two words you won’t find are Merry Christmas. At least in English, though there are plenty of “Seasons Greetings” and “Happy Holidays” and corporate promotion to go around in the Queen’s English, brought to you by the politically correct folks at Sylvania.

Time Magazine – My problem with the news magazine isn’t them naming Pope Francis I as their “Person of the Year”. The new pope has remade the papacy and the image of the church through his bucking of some traditions, public displays of compassion, unpretentiousness and humility and attempts to dilute the harshness of the church’s tone without changing its positions on social issues. The Holy Father is a worthy recipient. My problem was that Miley Cyrus was considered in the running. How is a 20-year old whose main talents these days are reveling in drug use, wearing next to nothing in music videos and grinding her womanhood up against the crotch of a married 36-year old man on cable tv a worthy contender for what is considered one of the highest honors by the media? Joe Stalin’s two “Man of the Year” awards have suffered significant depreciation, to say nothing of Time Magazine’s reputation.

The GOP Establishment – Particularly soon-to-be former Republican lieutenant governor Bill Bolling. I hope you’re real happy with the results of the election of Clinton family bagman Terry McAuliffe as governor. Bolling’s sub-rosa and overt attempts to undermine the GOP’s gubernatorial nominee Ken Cuccinelli contributed to McAuliffe’s narrow victory, one that will have real political consequences for the GOP’s attempts to win back a critical state that voted twice for Obama. Don’t complain if the McAuliffe machine devises legal machinations that will make winning Virginia that much harder by a Republican in 2016. If the Republican Party ends up mired in a civil war in 2014 that spills over into the next presidential cycle, the seeds were sown in Old Dominion state’s gubernatorial race where the party establishment took their support and went home.