The conventional wisdom as the race for the open 6th District congressional seat currently held by 2014 Senate candidate Bill Cassidy progresses through its early stages is going to be that state Sen. Dan Claitor (R-Baton Rouge) is the favorite to win.

Claitor’s quotes to the Times-Picayune upon his announcement won’t exactly light the conservative vote on fire with love for him, though…

Claitor said his family convinced him to run in order to bring some “reasonable people” to Congress. An unpredictable legislator known to weigh each individual bill based on merit and conscience, Claitor said he would continue this practice if elected.

“I think that the 6th is a district that wants people to make a decision based on the merits and not purely party politics,” Claitor said, adding, “My philosophy is certainly a Republican one, but if someone else brings an idea to the table, I’m not going to ignore it because of the label (of) the proponent.”

That sounds a bit like Vance McAllister did when he ran in the 5th District race earlier this year, and McAllister won a 60-40 runoff blowout over Claitor’s Senate colleague Neil Riser.

But what was really interesting about Claitor’s announcement was the way he took the long knives to Tony Perkins, the Christian conservative leader whose name has been flung around as a potential candidate in the race. Some quotes…

Referencing Perkins’ rumored intentions, Claitor said he was “not excited” by the idea of “some of our candidates having questionable associations with certain hate groups.” Perkins’ Washington, DC-based FRC is a designated “anti-gay” hate group by the Southern Poverty Law Center.

“I don’t want Louisiana to become the focus of the national media because we have extremists running for a particular office,” he said, likening Perkins to former state legislator and KKK Grand Wizard David Duke, who grabbed headlines when he ran for governor and lost against Edwin Edwards in 1991.

It’s going to come off as a gross violation of Ronald Reagan’s 11th Commandment to hit Perkins that hard when he’s not even in the race yet. Calling him a member of a “hate group” because Morris Dees, who some would say is responsible for siccing a lunatic gunman on Perkins’ offices earlier this year, slimed him as such makes Claitor sound like the Democrat in the race. And there has to be something of a Louisiana version of Godwin’s Law that would apply to any Louisiana politicians who reference David Duke when attacking one another – that it’s another Republican doing it is an eyebrow-raiser.

Claitor would be the business candidate in the race. He has a 100 percent rating from LABI in the state Senate for 2013, though his lifetime rating from the business group is only 80 percent. The Louisiana Family Forum, on the other hand, has him at an 88 score for 2013, which places him in a 13-way tie for 8th place among the 39 state senators. Considering that Tony Perkins founded the Louisiana Family Forum, and considering this picture taken at the LFF legislative banquet in September… 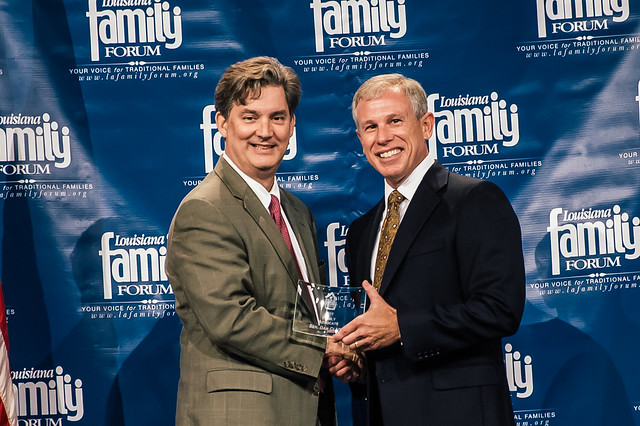 …one wonders if it was really all that smart a move for Claitor to come on so strong.

If Perkins gets in the race, which is an on-again, off-again rumor, then he and Claitor might beat each other so bloody that the field would be wide open for either a Democrat or a Tea Party Republican to knock one of them out of the runoff and possibly carry McAllister-style momentum to victory from there.

If Perkins doesn’t get into the race, Claitor might have set himself up for LFF and its allies to rally around another candidate and run an insurgent race against the “establishment RINO” who broke the 11th Commandment as soon as he got into the race.

It just seems like a clumsy way to get in. At some point Claitor might want the votes of these “hate group” types. Trashing them out of the gate like this by going after Perkins before he’s even in the race is all anybody will remember about Claitor’s entry.