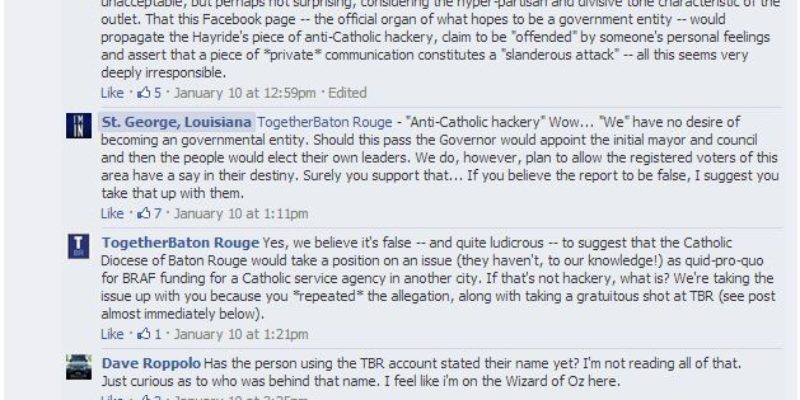 Friday, when we posted our mini-expose’ on how Together Baton Rouge is working within the Catholic Diocese of Baton Rouge to co-opt the Church’s priests into serving as shock troops against the St. George effort, we stirred up a hornet’s nest of angry lefties on social media.

When the St. George organizers posted a link to our story on their Facebook page, we saw this response and the thread it generated (which we happily participated in)… 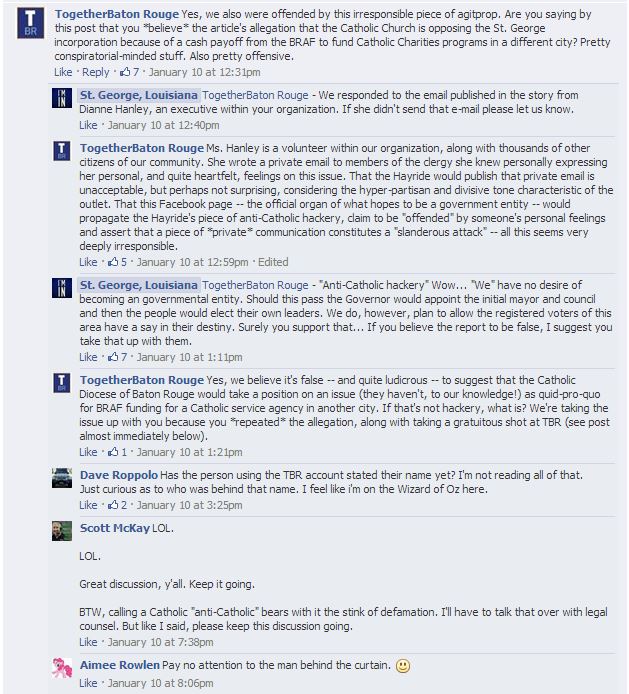 A bit breathless and vitriolic, to be sure.

And a good point is made as to exactly who it might be posting as “Together Baton Rouge” on Facebook.

It could well be that organization’s head, Brod Bagert, but he has his own Facebook account and he’s not particularly shy about using it.

Or it could be the “volunteer in our organization” Dianne Hanley, whose e-mail to the South Central Deanery within the Catholic diocese touched off the controversy in the first place. If it is Hanley trolling on the St. George page it would be highly amusing given the attempt to minimize her importance within Together Baton Rouge.

But it might also be Edgar Cage, another of the highly-visible “volunteers in our organization” acting for Together Baton Rouge.

Cage is quoted in local media often on TBR’s behalf, but today he didn’t do a lot to enhance its credibility. In a story outlining the fact that the Capital Area Transit System, the operator of empty buses recently showered with $18 million per annum in tax revenues thanks to TBR’s efforts in political organization, will miss virtually all of its promised performance goals by the promised deadline, here’s what Cage had to say on his organization’s behalf…

Edgar Cage, a Together Baton Rouge leader who has been involved with the CATS campaign, said now that CATS has secured its contract with MV and has a new CEO and board in place, the group is ready to bring back a revised report card system.

“The promises made, as far as new improvements, they will be kept, but just maybe not in the same timeline,” Cage said. “We can’t hold the current administration accountable totally to what was promised in the past.”

He said the group will meet in April, after the March 31 deadline, to evaluate how far CATS has come.

“I am cautiously optimistic,” Cage said. “But until the system is delivered, we will continue to work and continue to monitor to make sure the promises are achieved.”

No, he’s not kidding.

TBR promised that it would hold CATS accountable for producing the more robust bus system advertised when that $18 million-per-year tax increase was on the ballot, and instead there was no effort at accountability at all while the greaseball politicians on the CATS board and its even greasier CEO Brian Marshall applied those new revenues to sweetheart consulting contracts and DirecTV bills for board members while the system’s revenues were going missing.

All this was going on, and TBR was nowhere to be found. Until everybody else in town found out what a circus the CATS board under former chairman Isaiah Marshall had become.

TBR’s efforts at accountability were so brazenly nonexistent that it actually recommended a convicted felon who served time for embezzling funds donated to fight teenage drug abuse to serve on the CATS board. Had it not been for the efforts of conservative activists at providing the accountability TBR said it was taking on, that felon would have been named to the board.

And faced with the fact that CATS’ offerings with that influx of cash won’t be substantially more comprehensive than they were without it, TBR is taking a three-month hiatus before it deigns to pass judgement on CATS’ progress.

What happens in April? Will Cage be “cautiously optimistic” again when CATS isn’t much further  along than it is now, and when there has been no appreciable increase in ridership? Or will he join in the excuse-making? Already we hear that CATS can’t deliver on its promises because some of the tax revenue was lost when it was discovered – shockingly! – that it was illegal to void the homestead exemption as the tax sought to do.

These people sold the city a bill of goods on a bad tax, they’ve helped to create a graft engine in a public entity thought to be out of sight of the majority of Baton Rouge’s taxpayers, they’ve contributed to at least perceived corruption in local government and now they’re attempting to co-opt the Catholic Church by having friendly priests purport to speak for it against the St. George incorporation.

Let’s not forget that Together Baton Rouge is an affiliate of the Industrial Areas Foundation, which was founded by Saul Alinsky, a man whose masterpiece book Rules For Radicals contained this dedication…

“Lest we forget at least an over-the-shoulder acknowledgment to the very first radical: from all our legends, mythology, and history… the first radical known to man who rebelled against the establishment and did it so effectively that he at least won his own kingdom — Lucifer.”

These people are now accusing their critics of being anti-Catholic.

They’re a joke. An absolute joke.