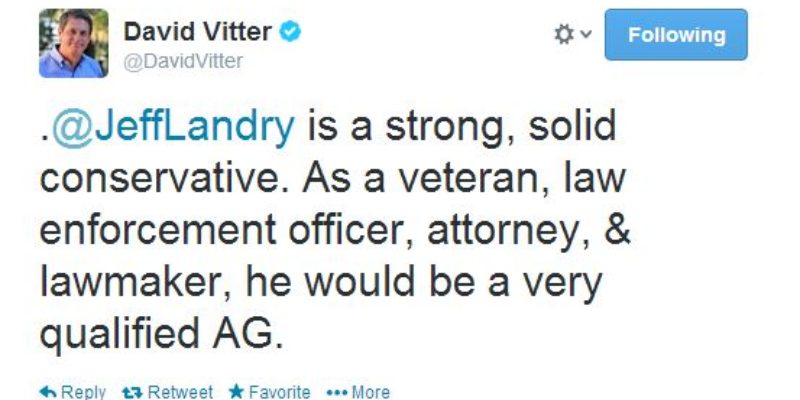 We’ve known this was coming for a while, and thought it would happen last month – but former Congressman Jeff Landry finally announced he’s running against Buddy Caldwell for Louisiana Attorney General.

Jeff Landry is announcing today his intention to seek the office and serve as Louisiana’s next Attorney General.

The election will be held in the fall of 2015. Landry is making the announcement today as his first step toward preparing the campaign and serving as Attorney General.

Jeff Landry is a successful attorney, a former lawmaker who fought for Louisiana’s conservative values in Congress, a veteran, a former Sheriff’s Deputy and local policeman, a father, husband and small businessman.

“Time and time again we are seeing major public policy decisions driven into our courts both with expensive mandates from Washington bureaucrats to other issues here at home. I look forward to putting my proven conservative principles to work for the people of Louisiana as our next Attorney General,” Landry added.

Landry has noted the need for change in the Attorney General’s office. Last fall, in an Op-Ed that ran in multiple Louisiana media outlets including several daily newspapers, Landry wrote about the small number of law firms seeking to profit at the expense of jobs and economic growth in the state by using contingency fee contracts approved by the AG.

Jeff Landry was named the “only honest man in Washington” by the well-known national Examiner newspaper for his decision to put conservative principles ahead of politics in Congress.

In Congress Jeff Landry became known nationally as a ferocious advocate of the Constitution, a leader on national energy policy emphasizing increased domestic oil & gas production, an advocate for true reductions in wasteful spending and conservative family values. The National Journal ranked Jeff as the 4th most conservative member within the entire United States Congress during his time in office. At the same time Jeff Landry cast more bipartisan votes than any other Congressman from Louisiana. Landry has said this proves you can work across the aisle to get things done for your state without compromising your principles.

Jeff Landry is a veteran of Desert Storm and left the military with the rank of Sergeant. He received the Army Achievement Medal, the Army Commendation Medal, a National Defense Ribbon, an Overseas Training Ribbon and the Louisiana War Cross from his eleven years of service as a member of the Louisiana National Guard.

Jeff has a strong background in law enforcement. He served as both a Sheriff’s Deputy as well as a Policeman. He understands the need to protect our communities and to ensure the law is faithfully utilized by our officers, the Attorney General’s office and the courts to protect our liberties at the same time we enforce our laws keeping our communities safe.

As a business attorney in private practice, he spends countless hours in the legal trenches with Louisiana’s jobs creators. With his background in small business he has worked on a myriad of legal issues affecting his clients. He has argued cases in front of courts throughout Louisiana.

Jeff holds a Juris Doctor of Law degree from Loyola University. He holds a B.S. degree in Environmental and Sustainable Resources with a minor degree in Biology from the University of Southwestern Louisiana; a degree he used to support Louisiana’s oil and gas industry.

A prediction: if this thing ends up in a head-to-head race between Landry and Caldwell, it will be a blowout for Landry. But it’s questionable whether that will materialize – first, Caldwell might not actually run. He’s got $411,000 in his campaign account, as of the end of 2013, but that’s a pittance compared to what Landry can raise and Caldwell can’t campaign like Landry can.

Second, there will be other candidates in the race – and everybody in the race will be trying to outdo each other to bash Caldwell.

Jefferson Parish President John Young has made noises about running for statewide office, and the AG job is considered his best bet. And Baton Rouge attorney Marty Maley is already in the race. It’s expected a Democrat will jump in as well, though it’s unclear who that might be. Should a Democrat get in, it might make for a difficult hill for Caldwell to climb to make the runoff.

UPDATE: It’s not a big surprise, but on the same day Landry announced for attorney general, Sen. David Vitter, who will be running for governor on the same ballot in 2015, endorsed him. Via Twitter… 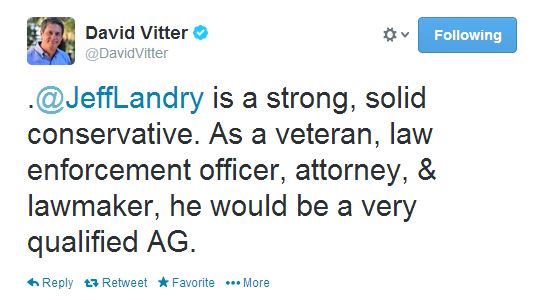 And Landry put out a press release in response…

“I want to thank Senator David Vitter for his kind words regarding my announcement today. Senator Vitter has been a tireless advocate for Louisiana and our conservative principles,”said Jeff Landry.