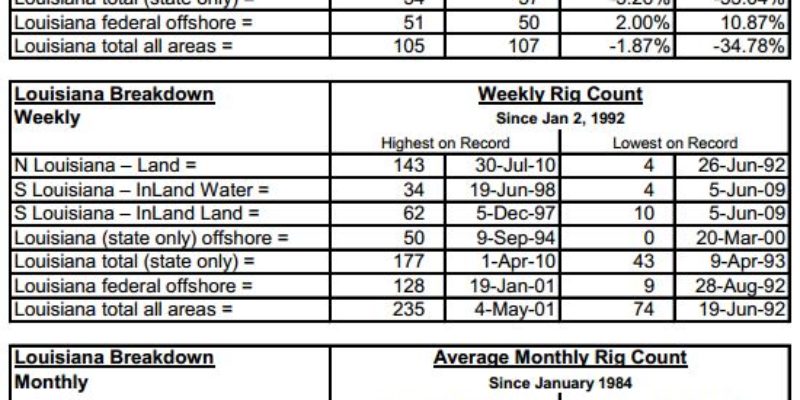 If you saw Clancy DuBos’ latest entry at the New Orleans Gambit website, you might have been struck by the level of vitriol he aimed at Don Briggs, the president of the Louisiana Oil and Gas Association.

It didn’t get any better from there.

Legendary bank robber Willie Sutton reportedly was once asked why he robbed banks, to which he allegedly replied: “Because that’s where the money is.”

If Sutton had been an oilman, he no doubt would have plied his craft in south Louisiana. Because that’s where the oil is. And the gas.

Sutton also would have felt right at home in the Louisiana Oil and Gas Association (LOGA). Mind you, there’s nothing criminal about prudently extracting oil and gas from the marshes of south Louisiana and piping it through miles of man-made canals, as long as you have the drilling rights and valid permits.

But there is something inherently wrong, and possibly illegal, about ruining the environment in the process, particularly when state permits require restoring the marshes afterward — or at least maintaining the canals so that they don’t degrade the marshes around them.

DuBos says that the oil industry is terrified of that flood authority lawsuit which LOGA sued the Attorney General over, claiming that it was illegal to allow lawyers for the Southeast Louisiana Flood Protection Authority-East to operate on a contingency-fee basis, and then takes Briggs to task by saying that since he fights environmental trial lawyers all the time he ought to be an expert on all their claims.

And then he piles on top of a bunch of other left-wing media folks’ scribblings this week over this snippet of Briggs’ deposition in the trial from Feb. 20…

Question:·Is it your opinion that oil and gas companies are leaving Louisiana because of the threat of lawsuits?

Question: Which oil companies have left Louisiana because of lawsuits?

Question: Do you have any facts or data to support your opinion?

Question: Is it your belief that oil and gas companies are not coming to Louisiana because of the threat of lawsuits?

Question: Which oil companies have decided not to drill in Louisiana because of the threat of lawsuits?

Question: Do you have any facts or data to support your opinion?

According to DuBos, the import of that deposition is…

Which brings me back to Willie Sutton. Briggs’ testimony proves that Louisiana is where the oil is — and the gas — and no lawsuit will keep Big Oil from coming here to get it.

The only question remaining is, will Louisiana make Big Oil pay for the damage it has done to our coastline?

Which is a load of crap.

Briggs’ testimony proves that he might not have been as well-prepared for that deposition as he might have been, but other than that nothing DuBos says in his conclusion is even remotely true.

A news flash for DuBos and lots of other pig-ignorant Democrats who’d like to opine about the oil industry they obviously know so little about: just because you have oil it doesn’t mean the energy industry is going to throw money at you.

There is oil all over the place, in case you haven’t noticed. And while Louisiana certainly is sitting atop a grand fortune in black gold, we have lots of competition in that respect.

Let’s take a look at the rig count in Louisiana, shall we? From Baker Hughes’ most recent survey dated Feb. 21… 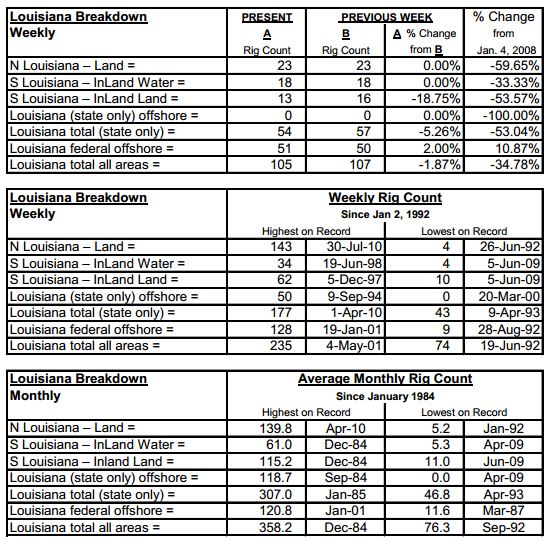 Those aren’t exactly record numbers, and they’re not exactly indicative of a growing oil and gas sector despite all the talk about how much oil Louisiana is sitting on.

Just because you have it, it doesn’t mean they want it.

There are only so many assets the oil industry has available to deploy. Rigs cost money, and there is a finite supply of petroleum engineers and professional drilling hands available. They’re going to be deployed in places where it’s most economically advantageous to do so.

Like, for example, the Eagle Ford or Permian Basin in Texas, or the Bakken Shale in North Dakota. 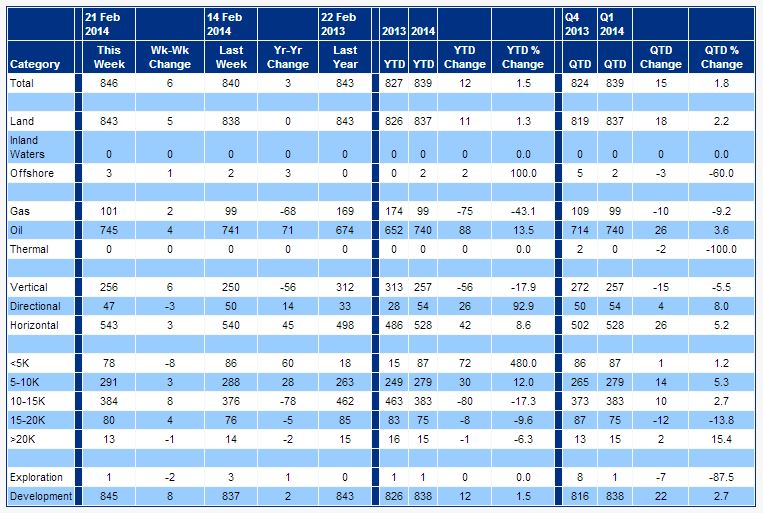 652 oil rigs last year, 740 this year, which is a 13.5 percent increase. The total rig count isn’t up quite as much because the price of natural gas is depressed at present and the energy companies are looking to drill in “wet” plays (“wet” meaning there is oil, “dry” meaning it’s just natural gas; the Haynesville Shale, for example, is a “dry” play while the Tuscaloosa Marine Shale which cuts across the central part of Louisiana is a “wet” play with some 7 billion barrels of oil reportedly available).

But you can clearly see that the resources and investment dollars of the oil industry are being spent in exploring for oil in Texas, as that state is seeing a significant increase, while in Louisiana it’s flat if not declining. Based on the simplistic Clancy DuBos “we have oil and therefore the oil companies will come here no matter what we do to them” analysis, Louisiana ought to be growing just as fast as Texas does.

But it isn’t – and why? Because you can make more money drilling for oil in Texas than you can in Louisiana. In Louisiana you’re going to deal with the lousy legal climate which began with the legacy-lawsuit mess (for more on legacy lawsuits, see here, and know that in Mississippi and Texas the number of legacy lawsuits being filed is almost zero while it’s in the hundreds here in Louisiana) and now includes these coastal lawsuits. The Southeast Louisiana Flood Protection Authority-East lawsuit seeks $8 BILLION for “coastal restoration.”

Who wouldn’t like eight billion dollars to restore Louisiana’s coast?

Interestingly enough, the guy who ran the state’s Coastal Protection and Restoration Authority. Garret Graves is now running for Congress, but in his previous job he put together Louisiana’s master coastal restoration plan and nothing about that plan involves suing oil companies because they cut canals into the marsh. In fact, Graves has some pretty pointed opinions about the issue, as his Twitter stream has made clear since it was filed in July.

It’s not necessary to sue any oil companies. The funding for that plan is already in place. In fact, $725 million in coastal projects has already been laid in for FY 2015, with a long list of projects to be put in place.

Again – there are only so many assets which can be deployed for coastal restoration. There are only so many engineers, only so much equipment, only so many companies which can be hired. Thus it’s not just funding which forces prioritization of this work; it’s who’s available to do it. You can’t just hire up a bunch of Mexicans and people in the housing projects in New Orleans, give them shovels, truck them down to a marsh somewhere and have them unload boxcars of dirt; that’s not how this works.

Let’s say that flood authority got the whole $8 billion they want. A third of that money pays those contingency fees, meaning the better part of $3 billion pays lawyers. Safe to say that ZERO coastal restoration is going to happen with that money.

The other $5 billion goes toward coastal restoration, supposedly. To go on top of the $50 billion budget the master plan already has laid in from federal dollars and offshore royalties, etc.

But here’s the thing. The Southeast Louisiana Flood Protection Authority-East was represented in the construction of the master plan; in fact, it was former SLFPA-E board member John Barry, who is the chief agitator for the lawsuits, who represented that board on the committee which produced the master plan.

And Barry then turned around and dragged that board off the reservation in filing the lawsuit.

DuBos talked about none of this in his attack on Briggs. One wonders if he has a clue what he’s talking about. The guess is, “probably not.”

As for Briggs, sure. It would have helped his cause if he could have gone into that deposition with a bunch of detailed info about how many oil companies were leaving Louisiana due to that lawsuit. But come on. First of all, if you’re already operating in the state this lawsuit wouldn’t make you leave; you’ve already got assets in place here and assumedly they’re producing revenue. Unless you can sell those assets at a decent price and get out, you’re stuck here.

In that respect DuBos and the rest of the lefty crowd are right.

But what none of them seem to understand is that in that respect they’re talking about wells, not rigs. A well pumps oil, a rig drills for it.

And wells produce almost zero jobs. They’re unattended, and their product goes into a pipeline somewhere. Once in a while somebody will show up to check on them, but that’s it.

Rigs, on the other hand, employ lots of people. All the effort involved in finding the oil, constructing the rig, supplying it, laying the pipe in the well, commencing the drilling operation, connecting the well to a pipeline…that’s the stuff which makes people rich.

In the 1980’s when the oil industry all but died in Louisiana, the existing wells didn’t stop producing. People who had oil on their land still got royalty checks. What stopped happening was that the oil companies stopped installing rigs around the state. And all the jobs associated with those rigs went away.

And so when Don Briggs is asked which oil companies will leave the state if that coastal lawsuit goes forward, he’s going to say none. It’s a stupid question.

The second big question, the one about which oil companies won’t invest in the state, is a fairly stupid one as well. They’re asking him to prove a negative; or worse, they’re asking him to speculate under oath. How many people are willing to do that?

Sure, Briggs could have talked about rig counts like we just did as a means of showing what lawsuits can do to the oil business, and maybe he should have. But DuBos shows his enviro-loon rear end when he says that because Briggs can’t point to a specific oil company that he can prove will either leave the state or not come here due to that lawsuit, it shows that Louisiana’s oil patch wouldn’t be damaged by $8 billion in legal costs.

Think about that. DuBos, and the attorneys for Louisiana’s attorney general, are taking the position that an $8 billion lawsuit won’t cause harm to members of the Louisiana Oil and Gas Association. And they’re demanding that specific proof be shown to dispute that position.

Except for the U.S. federal government, which doesn’t have to turn a profit or even pretend to balance its budget, is there any entity on earth you could sue for $8 billion and they wouldn’t feel it?

Briggs’ testimony at that deposition might not have been his best moment, and it might have had a lot to do with his current state of health, but if there is anything “pathetic” to be found surrounding the issue in question it’s the reasoning of folks like DuBos. Here’s hoping that responsible adults in the state legislature take action to put these coastal lawsuits to bed and let the coastal master plan work as it’s designed.

Interested in more national news? We've got you covered! See More National News
Previous Article State GOP To Mary: What Are You Gonna Do About Karen Carter Peterson?
Next Article Adley Files Ethics Complaint Over The Wade Shows-Janice Clark Fundraiser