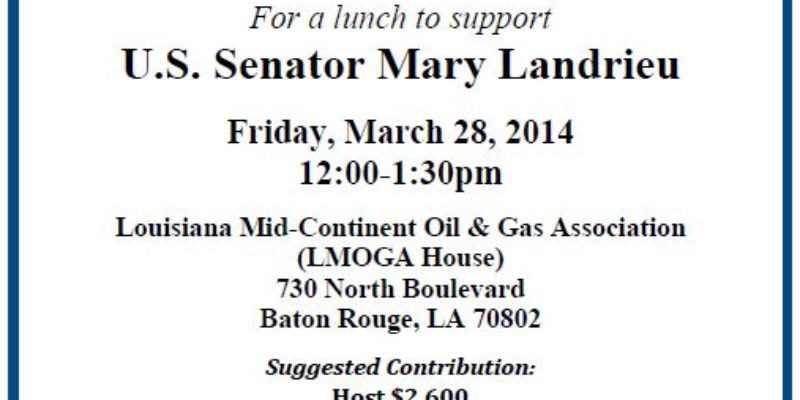 We picked this up on Friday. It’s a message from Dan Borne’, the president of the Louisiana Chemical Association. And many of its recipients are displeased about it…

Greg Bowser, Chris John of the Louisiana Mid-Continent Oil and Gas Association (LMOGA) and I are hosting an event for United States Senator Mary Landrieu in Baton Rouge on Friday, March 28, 2014, from 12:00 to 1:30 p.m. at the LMOGA House, 730 North Blvd.

Senator Landrieu has risen to a level of considerable influence in the Senate by her recent selection as Chair of the Committee on Energy and Natural Resources.

It has been nearly 20 years since a Louisiana senator has chaired a committee so central to the state’s oil, gas and chemical manufacturing economy.

It’s a fitting irony that this committee originated as the Committee on Public Lands, which was formed in the early 1800’s to manage the vast area known as the Louisiana Purchase.

In addition to her leadership on the Energy Committee, Senator Landrieu serves on the Committee on Homeland Security and Governmental Affairs, which has jurisdiction over a myriad of agencies that Louisiana’s energy facilities and chemical plants interact with regularly.

She is also Chair of the Senate Appropriations Committee’s important Subcommittee on Homeland Security, which handles funding for these same regulatory agencies.

Finally, her well-rounded committee membership includes the Committee on Small Business and Entrepreneurship, for which she has earned the US Chamber of Commerce’s Spirit of Enterprise Award.

An excellent biography of the Senator can be found at http://www.landrieu.senate.gov/?p=biography

The attached invitation provides details about the event, information about individual and/or federal PAC participation and emphasizes that corporate contributions are not allowed.

Please consider participating and forwarding this message to others in your organizations, including representatives of your federal PACs should your company have one.

If you have any questions or need additional information, please contact me at my personal email address, [email protected] or call me at 225.229.9500 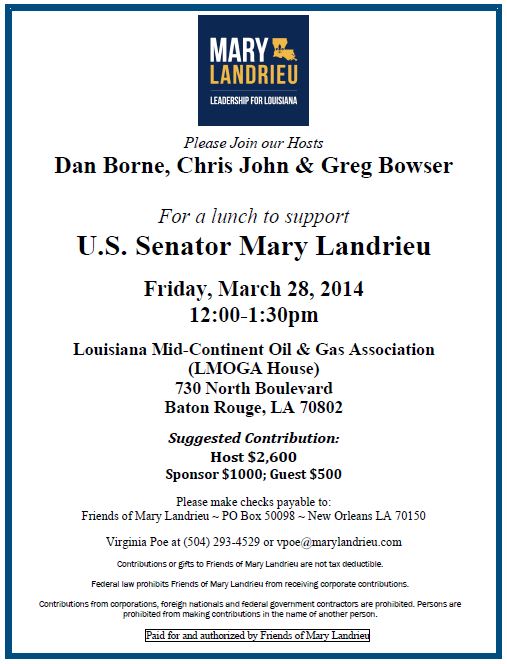 Is it a big surprise that LMOGA and LCA are backing Landrieu?

What’s going to be interesting, though it’s probably unlikely we’ll get to find out, is how big a crowd that luncheon will bring. What we do know is that there are significant dissenters within both LMOGA and the LCA who are furious to see them holding a fundraiser for Landrieu – otherwise we wouldn’t have gotten tipped off to it.

Is Mary actually any good for oil and gas or the petrochemical industry? We would argue she’s lukewarm at best.

After all, she still hasn’t taken a public position on the Louisiana Democrat Party’s endorsement/politicization of those coastal lawsuits, and for somebody who’s such a pal of the industry to stay quiet on that topic ought to be pretty disappointing. And then there’s the question of Mary’s Jazz PAC passing along donations it’s taken to anti-fossil fuel politicians like Barbara Boxer, Bob Menendez and Sheldon Whitehouse, which is a fairly large-scale slap in the face to donors to that PAC from the oil and gas industry. The LMOGA/LCA fundraiser goes straight to her campaign rather than her PAC, though one imagines there might be attendees who choose to throw their money at the PAC as well.

She’s also been less-than-vociferous in detracting from the Obama administration’s practice of appointing enviro-loons to positions which regulate the oil and gas and petrochemical industries.

In short, it’s about standards. If Landrieu was a Republican you can bet LMOGA and LCA would be a lot less complimentary of her record. But Democrat politicians have an uncanny ability to get business groups like LMOGA and LCA to put up with all kinds of treachery and forgive it.

One might almost look upon the checks Landrieu is getting at the LMOGA event as protection money. Business pays protection money to Democrats all the time. It’s why Landrieu has managed to take $55,000 from the Koch Industries PAC over the years, for example, or why some of the worst state legislators at the Capitol can still get a campaign check from business lobby groups.

At some point it might be nice if that were to stop. But don’t count on it. Business groups – even from industries in the crosshairs of the Left – go along to get along. That’s what they do.