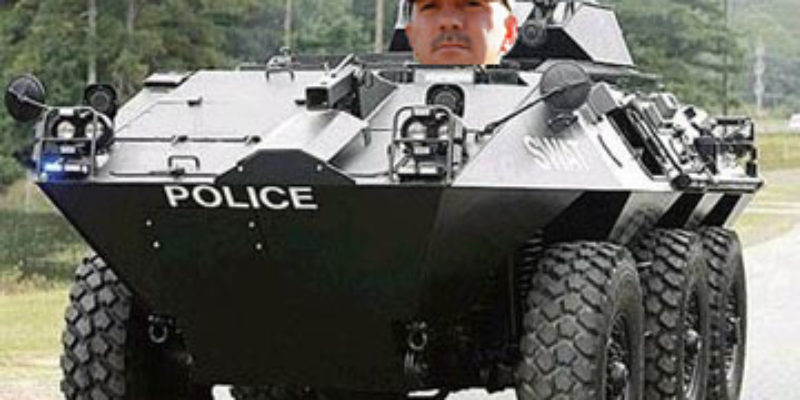 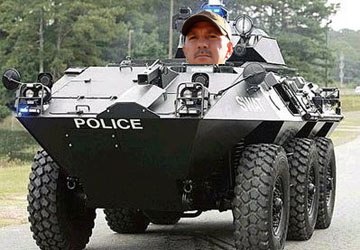 Our readers have surely seen the plethora of examples whereby the federal government is unloading tanks and other heavy equipment on local law enforcement agencies around the country. It’s a phenomena which has attracted attention not just from the Alex Jones/chemtrails crowd but from more mainstream observers as well.

The CATO Institute’s Radley Balko is an expert on this topic and has written a fairly widely-acclaimed book – Rise of the Warrior Cop: The Militarization of America’s Police Forces – on the question of why it is that police are becoming more and more like soldiers and why that’s not a particularly great thing. Here he is with Reason.tv talking about the book and the phenomenon…

That is the background behind HB 392, by Rep. Clay Schexnayder, which provides…

Schexnayder’s bill doesn’t procure military hardware for local police in Louisiana – it just puts the state treasury on the hook for some of the costs associated with picking up that hardware.

It’s unlikely he wrote the bill. It’s more likely he got it from one of the police lobby organizations – like for example, the sheriffs’ association.

It’s tough to justify the St. Helena Parish Sheriff’s Department having a Bearcat, for example. But go tell that to the sheriff in St. Helena who wants one, and who can get one from the Department of Defense free of charge.

So naturally the local law enforcement folks went looking for somebody at the legislature to carry a bill to help them get free military surplus swag, and to make that swag even more free by having the state pick up the freight cost. And Schexnayder, who’s not known as a particularly consequential state representative – he owns a car repair place in Sorrento and got elected in no small part because Trina Edwards backed him in his legislative race in 2011 – would have been a perfect choice to carry it seeing as though he wants to burnish his credentials as a pro-law enforcement conservative legislator.

Naturally, anybody who votes against this bill is going to be seen as “not friendly to law enforcement” or “soft on crime” or “putting our police at greater risk.” And that means it’s not unlikely this bill passes.

Sure would be nice if somebody killed it, though. If local governments want to militarize, let them answer to their own taxpayers rather than take money out of higher education to pay for it.