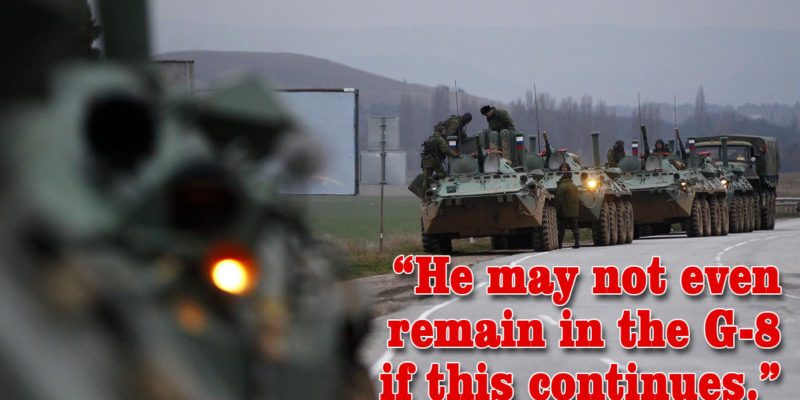 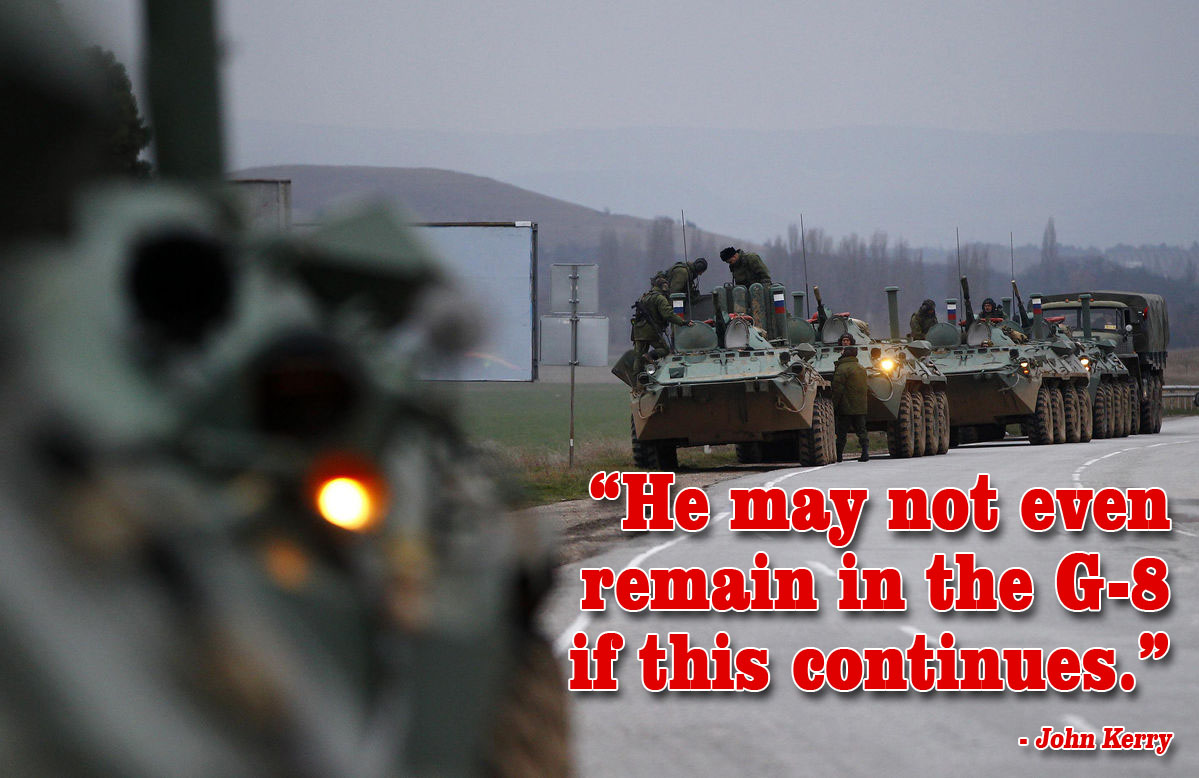 When Sarah Palin, back in 2008, predicted that Vladimir Putin’s conquest of part of Georgia earlier that year would be a prelude to his future conquest of the Crimea, the media and the Democrats laughed. And when Mitt Romney called Putin the largest threat to our geopolitical interests in 2012, our president mocked him by saying “the 1980’s called and they want their foreign policy back.”

And late last week when the Ukraine exploded into military conflict as Putin sent troops into the Crimea to occupy the place, the U.S. intelligence structure took the position that wouldn’t happen. So Obama and his Vice President released this video…

And now that the Russians are occupying the Crimea and demanding that Ukrainian troops trapped there surrender or, assumedly, meet a violent end, a fuse has been lit.

The new government in charge of the Ukraine is saying it will not respond militarily to the Russian invasion just yet. It’s asking for political and economic support from the West. So as of right now there is no pretext or reason for American or NATO military involvement, and it’s highly unlikely there will be one.

This is a repeat of Putin’s Georgian adventure. He’s cleaving a piece of territory off from a former Soviet republic in which he can claim to be “defending” ethnic Russians there, and just as in the case of Abkhazia and South Ossetia the Crimea is majority Russian by ethnicity. And with that goal met Putin will be in a position to dictate to the new Ukrainian government, which took power after that country’s pro-Russian tinpot president was deposed in a popular revolt, that its economic destiny lie with Russia and not the West.

This is a classic case of geopolitical power politics, and it strips the Obama regime of its foreign policy illusions.

As such, Obama’s Secretary of State John Kerry is reduced to blathering about how Putin is doing what he’s doing out of “weakness,” and various Obama lickspittles are calling him “unstable.”

Putin is anything but weak or unstable. On the contrary, he’s cold and calculating. He has spent six years sizing Obama up and recognizes him as weak and ineffective, and in the wake of rolling the American president on Syria he has recognized that he can do what he wants with the Ukraine and no serious consequences await him.

And he is correct.

Yes, Kerry has threatened to cancel American participation in the G-8 meeting at Sochi later this year. And yes, Kerry has talked about kicking the Russians out of the G-8, though it’s questionable in the extreme whether the Obama administration has the stroke with the other participants in order to do that.

There are lots of other economic and political steps available to attack Putin, from freezing assets to restricting travel.

He cares about none of those steps, because at the end of the day Putin knows that if push comes to shove he can align with the Chinese and the Iranians, and he might even be able to bring the Saudis and Pakistanis into his orbit – and if he is able to bring Pakistan into a Russian/Chinese axis it will make the NATO pullout from Afghanistan an unbelievably difficult operation. At present, the plan is to move combat vehicles and other materiel out of that country via Russian rail – should Putin not like our responses to his Ukrainian adventures he could refuse to cooperate there.

Putin also has a knife to Europe’s economic jugular, given that he controls the export of about one-third of Europe’s natural gas supply. Given that, you’ll see very little outrage from the EU over the Ukrainian crisis.

Of course, the best long-term response here would be for Obama to throw as much weight as possible behind natural gas exports to Europe. The American supply exists, and in fact natural gas production levels are reduced due to a glut in the American domestic market. If exports were thrown open and the effort was made to replace the Russian supply, it would constitute a major geopolitical game-changer. It would take time for that to happen, but over a 5-10 year period nothing would diminish Russia’s economic impact and threat in Europe more than weakening its role as an energy supplier. That American jobs and our trade balance would greatly benefit is an added bonus.

Nobody in the administration is talking about doing that yet, which is maddening. It’s clear they have no idea how to handle Putin after ignoring him for six years. They have completely bungled our relationship with Russia and now appear fools.

It would be laughable, but it isn’t. This isn’t some partisan tempest in a teapot, it’s the real thing. Putin wants to reconstitute as much of the old Soviet Union as he can and restart the Cold War in the name of Russian nationalism rather than international communism. And our leadership is completely unprepared for the threat, which essentially means we will do nothing about Putin’s imperialism – or at least nothing Putin finds particularly inconvenient.

Schadenfreude at Obama’s incompetence doesn’t work, because he represents us. Fear and dismay are all we have today.