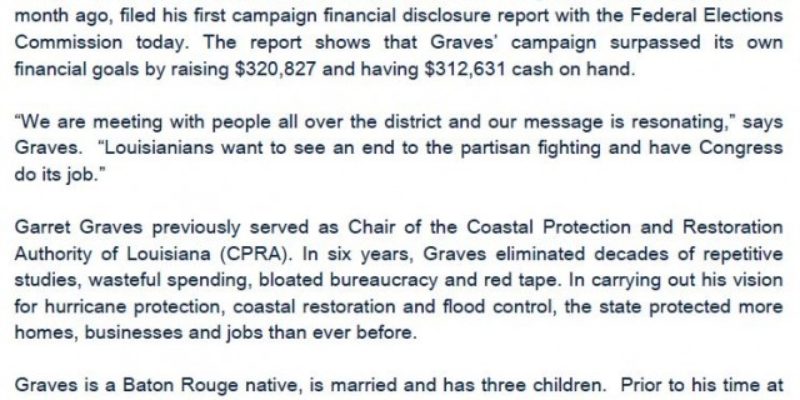 The news about Edwin Edwards’ paltry $32,000 fundraising figure for the upcoming 6th District congressional race might have captured a majority of the headlines, but the real news seems to have come from the fact that one of the latest entries into the race has blown the doors off the competition in the money war. A press release from Garret Graves’ campaign… 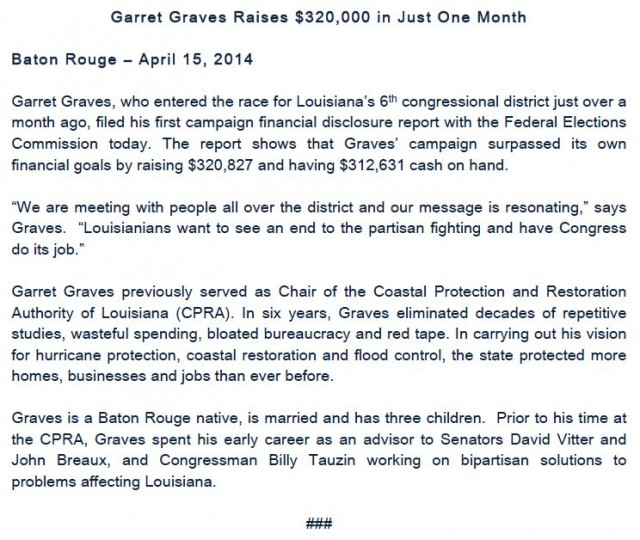 Graves is way ahead in the money game thus far. Dan Claitor appears to be next, having raised about $180,000 in the first quarter, while Paul Dietzel raised about $97,000 (but spent $102,000, which is not a burn rate that will sustain a campaign into the summer). Craig McCulloch, we’re told, raised about $35,000 from outside sources and dumped $100,000 of his own money into his campaign.

We don’t have 1st-quarter numbers from anybody else in the race.

There is some polling out on the race, though the majority of the latest stuff is coming from Dietzel’s campaign. His latest numbers, which were done by our friend and occasional Hayride contributor John Couvillon, were as follows… 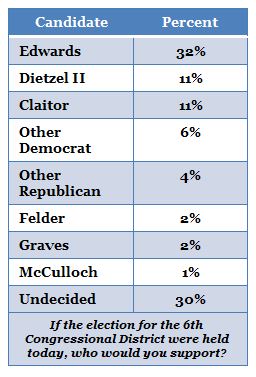 What’s also interesting about the Dietzel poll was that Dietzel leads Edwards 48% to 39% in a runoff election, and 52% of likely voters say they wouldn’t vote for Edwards under any circumstance. Nobody has even started attacking the old man yet and his negative is already at 52.

This thing is wide open. Graves has shown he can put money away; his challenge now is to show he can work the retail politics part of the game and begin defining himself in a way the voters will respond to. And Dietzel, who has reportedly begun building a grassroots operation some observers have called “amazing” even at this early stage, is going to have to show that he can slow down that burn rate. Claitor will have to turn his name recognition (he’s a state senator, which makes him the only current elected officeholder in the race) and his sizable campaign war chest into a winning narrative. And McCulloch is going to have to capture the iconoclastic/Tea Party/Politicians-Suck-And-I-Won’t-Vote-For-One-Damn-More-Of-Them vote, which he can do if he’s willing to spend freely on smart messaging defining himself correctly.

One of those will accomplish his goals first. That’s likely to be the candidate who makes the runoff with Edwards. And that candidate is your next congressman from the 6th District in all likelihood.

Interested in more national news? We've got you covered! See More National News
Previous Article UPDATED: Edwin Edwards Has Raised Only 32K, And Here Are His Contributors
Next Article LA Senate Candidates All Donated To Dems At One Point