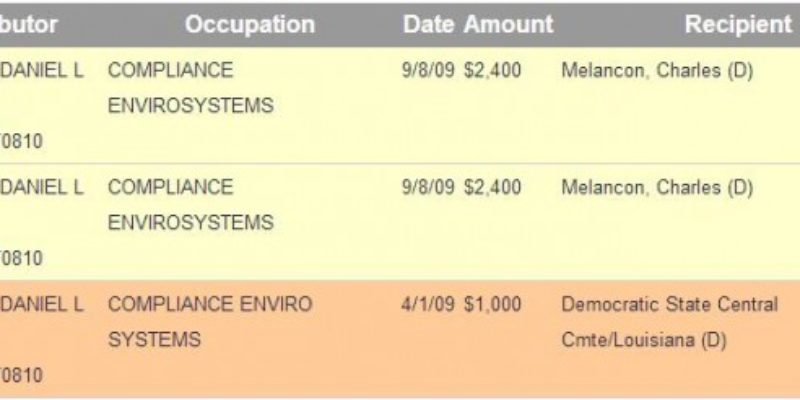 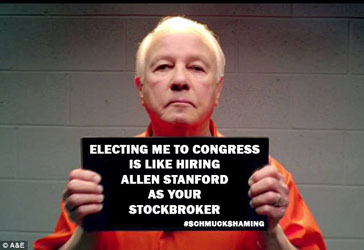 UPDATE: Did we mention that Danny Miremont is the ex-husband of Edwin Edwards’ second wife Candy?

Guess not. Sorry about that.

There is also an incident which well befits a Democrat donor…

On Friday, October 24, 2008, at 12:40am, officers were called to University Hospital in reference to two victims (W/M, B/F) that had received lacerations during an incident that occurred in the 1200 block of Bourbon. The W/M had a laceration to the back and one to the right hand. The B/F had a laceration to the left hand. Due to conflicting statements regarding the incident, both subjects were charged with aggravated battery.

The arrested subjects are:

Another subject involved in this incident was also charged with prostitution:

ORIGINAL: When disgraced former governor, convicted felon and failed reality TV star Edwin Edwards declared that he would inflict himself on the people of the 6th Congressional District as a candidate for Congress, we swore we’d publish the names, addresses and amounts of his campaign contributors.

Which we will do, but first we’re going to give you an incredibly convoluted and stupid explanation that we just received for why the Edwards campaign was able to take $7,800 from a single donor.

The federal limit on the amount of money an individual can donate to a single candidate in a single election is $2600. From the Federal Election Commission’s website…

Which means that if you’re running in an election in which there will be a two-stage party primary (the primary, plus a runoff) and then a general election, theoretically you might be able to collect $7800.

But in Louisiana, we currently use jungle primaries – and that means the primary is a one-stage affair. Everybody, regardless of party, runs in the primary, and then the top two vote-getters are in a runoff. That would mean the limit an individual could give to a single candidate in a single election cycle here would be $5200.

There is no election on August 22. August 22 is the last day of qualifying for the Nov. 4 jungle primary/general election. But the FEC is counting August 22 as a primary date, per an advisory opinion given to then-Rep. Billy Tauzin and the rest of the state’s congressional delegation back in 2000.

At the time, Louisiana had jungle primaries in federal elections like we do now (for a brief, shining moment starting in the 2008 cycle we had party primaries, but that was blown up thanks to stupid legislation passed in 2011). And Tauzin and the gang weren’t happy about the fact that all they could raise from single donors was $1,000, which was the limit at the time, in advance of the jungle primary – and if there was no  runoff or they didn’t make the runoff they’d have to refund the second grand they got from their donors. Had there been a party primary and then a general election, you see, they’d be able to collect that thousand bucks twice with a reasonable expectation they wouldn’t have to refund it, but the jungle primary screwed them over compared to their friends in other states.

So the FEC wrote an advisory opinion which happily concocted a solution. Read this and see if you don’t lose complete faith in the integrity of our election process…

The Louisiana elections schedule for 2000, as published by the Secretary,  indicates that an “OPEN PRIMARY” would be held on October 7, but no Congressional  offices are listed for that ballot; only 34 non-federal offices. http://www. sec.state.la.us/cgibin/?rqstyp=CNDMS&rqsdta=100700. [7] Commission regulations include multiple  definitions of the term “primary election,” including the most typical form; namely, an  election “held prior to a general election, as a direct result of which candidates are  nominated, in accordance with applicable State law, for election to Federal office in a  subsequent” election. 11 CFR 100.2(c)(1). [8] Since the Louisiana primary election of  October 7 did not include any candidates for Federal office, it clearly would not qualify as  a “primary election” for purposes of the Act and Commission regulations.

Another definition, though, addresses candidates who seek Federal office as “independent candidates” or “without nomination by” either of the two major political parties (Democratic or Republican). 11 CFR 100.2(c)(4). The regulation provides that an independent candidate or one that seeks election without nomination by a major political party may choose one of three possible dates as his/her “primary election” date.  One of the options for a primary election date is the last day, prescribed by State law, to qualify for a position on the general election ballot. 11 CFR 100.2(c)(4)(i). [9]

The Commission concludes that, pursuant to 11 CFR 100.2(c)(4), the candidates who are entered in the Louisiana Congressional general election this year must be treated as candidates who also had a primary election on August 18, 2000, which was the last day to file for the general election ballot. The salient circumstances are that such candidates had no opportunity under Louisiana statutes to seek nomination in a Congressional primary election, and there was no alternative political party nomination process in effect by either of the two major political parties in Louisiana that those candidates could have entered this year. Therefore, all such candidates are “seeking federal office . . . without nomination by a major party” and are entitled to consider August 18, 2000, as their primary election date. See 11 CFR 100.2(c)(4).

7 – The Secretary’s published ballot list for the Congressional elections on November 7 includes all seven Congressional Districts and the candidates who have filed with the Secretary for those offices. http://www.sec.state.la.us/cgibin/?rqstyp=CNDMS&rqsdta=110700.

8 – The cited regulations also include two types of primary elections that only occur in the presidential primary process. 11 CFR 100.2(c)(2), (c)(3). They also include a “primary election” definition for cases where a major party candidate is unopposed for nomination within his or her political party and who is thus certified to appear as that party’s nominee on the general election ballot. As indicated by the discussion above, this is not the case in Louisiana this year. Two candidates of the same party have qualified for the November 7 general election ballot in two Congressional districts, and there is no indication that any Congressional candidate was previously nominated by the political party with which they claim affiliation or affinity, for ballot listing purposes.

9 – This subsection also offers independent or non-major party candidates an option to choose a primary  election date that corresponds to the last major party primary held in the State, or the date of the candidate’s  actual nomination by his political party. 11 CFR 100.2(c)(4)(ii), (4)(iii). Neither of those options are  pertinent here since the two major political parties in Louisiana did not hold any primary election for  Congressional candidates in 2000 and do not have any other party process for nominating one candidate to  seek each Congressional office as the party’s nominee in the November general election. The history and underlying purpose of this subsection of the election definitions was “to be neutral as between party affiliated and independent candidates” and to treat non-major party candidates “the same as independent candidates. This was done because non-major parties usually do not have actual primary elections and spend a great deal of effort to secure a ballot position.” Federal Election Commission Regulations, Explanation and Justification, House Document No. 95-44, at 40, 41(1977).

So that’s why Edwin Edwards can take $7,800, or better than 20 percent of his contribution total in the first quarter, from someone named Daniel Miremont of a company called Compliance Envirosystems. Miremont is the kind of guy who would donate to a three-legged basset hound if it had a D behind its name, to wit… 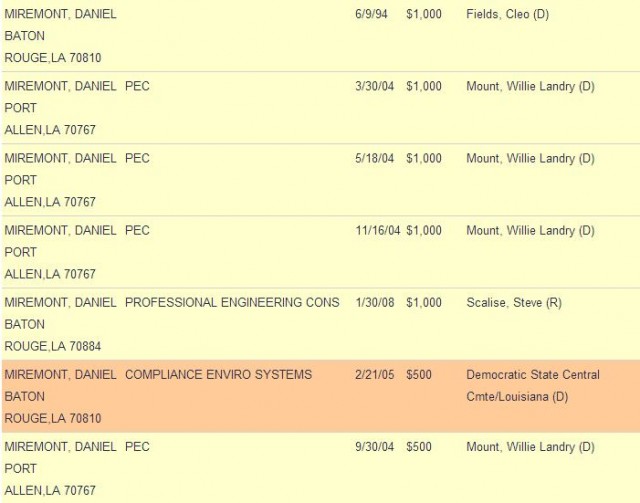 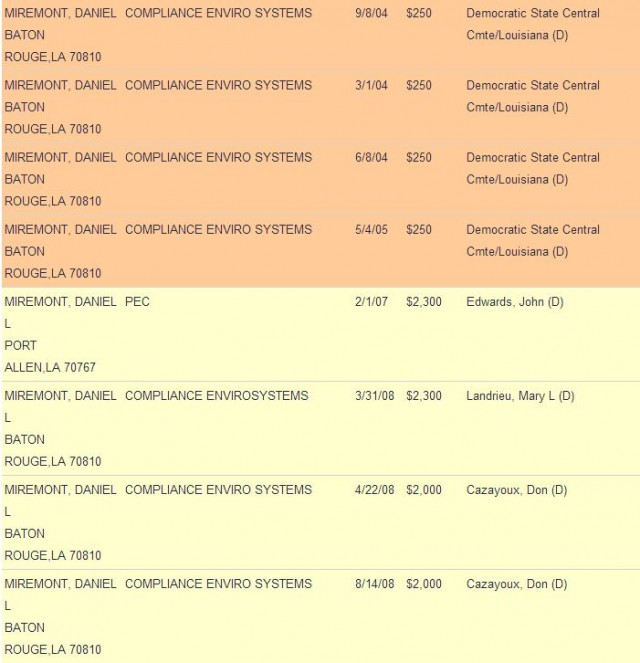 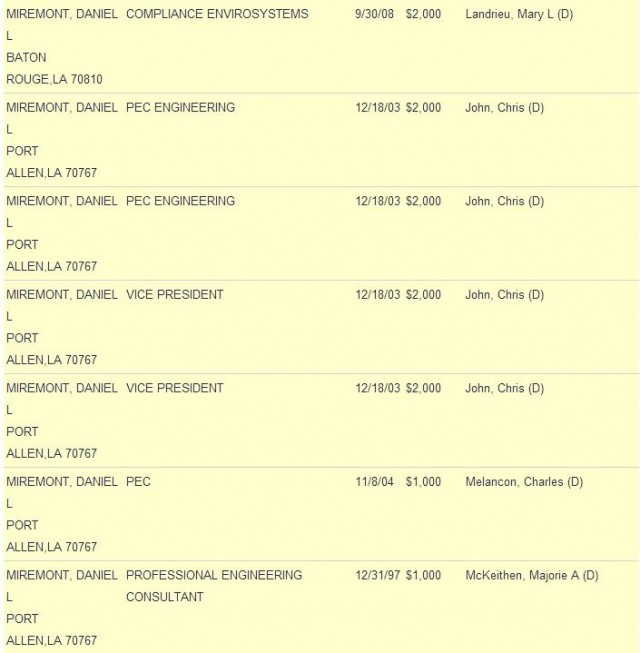 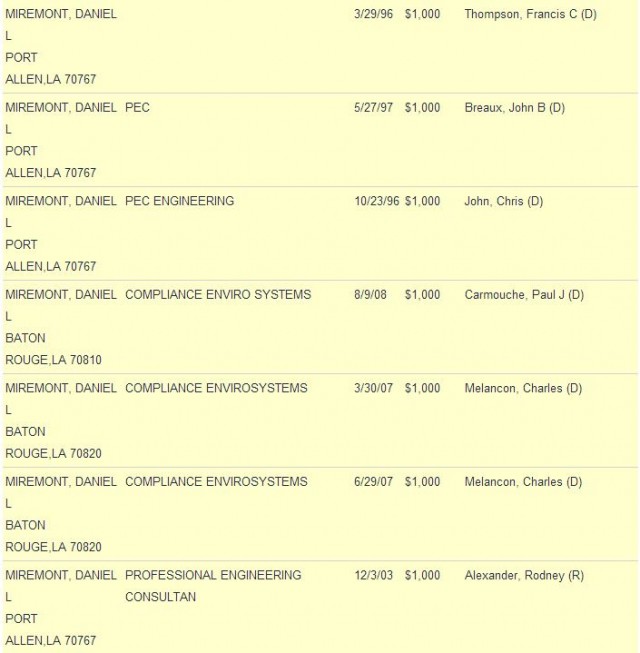 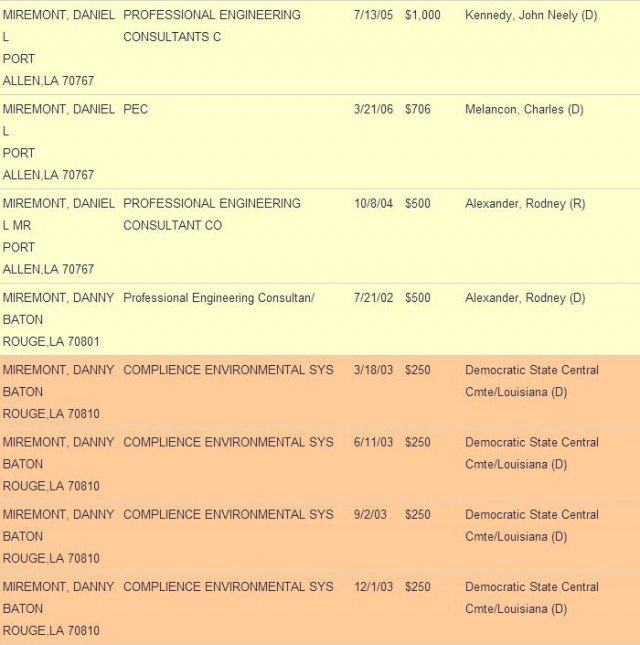 The lesson here is that – unsurprisingly – there are Democrat donors who have no standards at all. Miremont qualifies there.

There are other donors. Edwards’ wife Trina is on the books as donating $3,121.42 to the campaign, most of it in-kind. And then we have others… 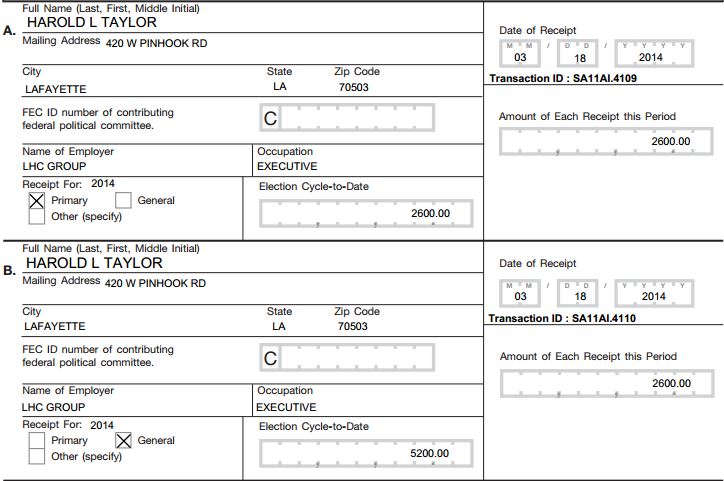 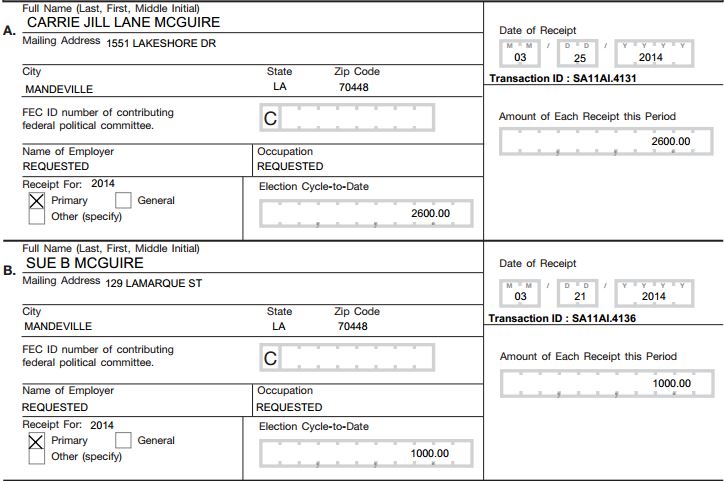 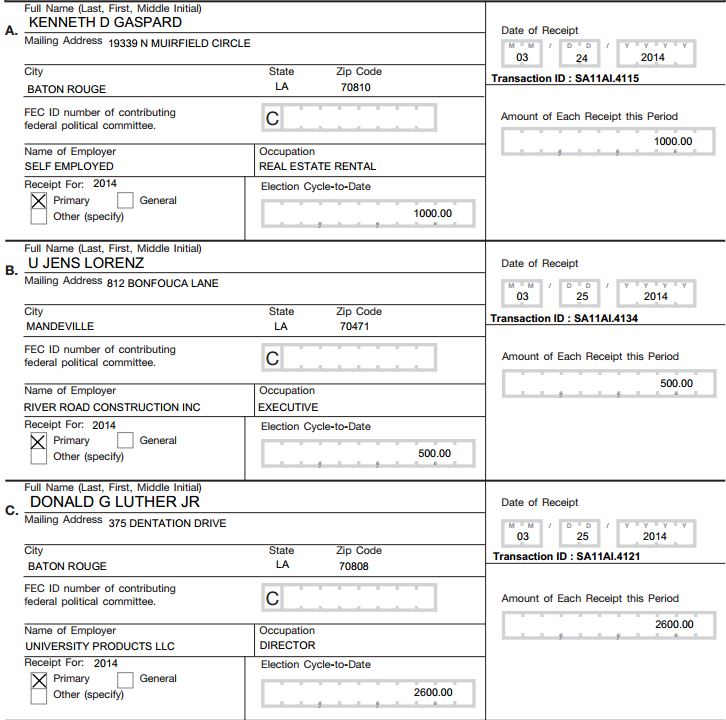 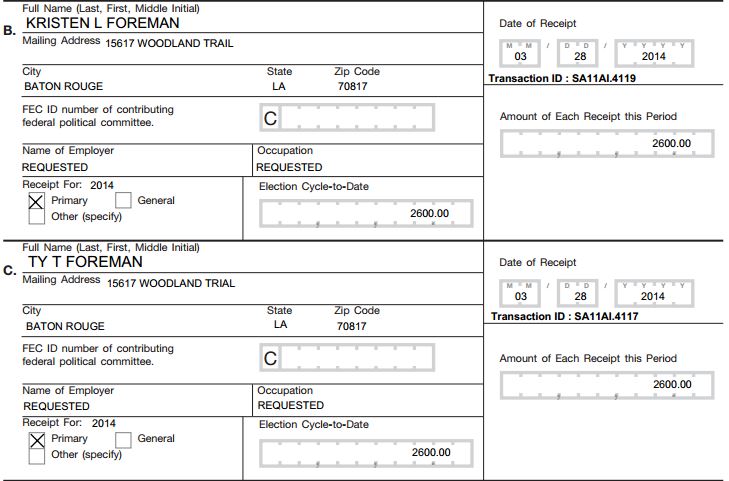 So those are the people who would like to inflict a convicted felon on Louisiana’s 6th District as a congressman. If you know any of these check-writing dunces, please feel free to explain to them why it’s not a good idea to bankroll a crook’s campaign for Congress.

Either that, or sell them swampland in Nevada – because they’re obviously gullible enough to invest.

The good news is that there are damn few of them. We count only a dozen, in more than two months.

Edwards probably doesn’t need to outraise his opponents, but the fewer donors he has the better. After all, it’s bad for the soul to know there are people with money who would rather spend their cash putting someone recently of a federal prison into the House of Representatives than helping to cure cancer or promote adoption.