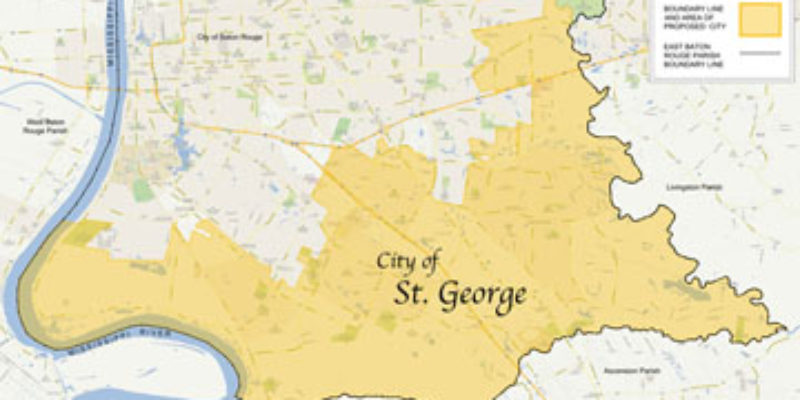 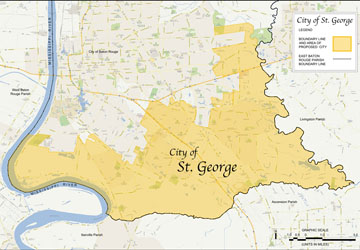 Buckets of money. That’s the easiest way to understand the revenue streams and collection points in East Baton Rouge Parish. Money flows into and out of these buckets.

Currently, there are five buckets of money.

When a revenue is generated OUTSIDE of a legally designated city limit, that revenue goes straight to the East Baton Rouge Parish bucket.

Now, I’d like to explain a little about annexation vs incorporation. Both are legal rights in our state constitution and our local plan of government. But there’s a fundamental difference.

The St. George effort isn’t taking, stealing, or borrowing one inch of land from the City of Baton Rouge. They are merely seeking to incorporate areas that are currently not incorporated. Nothing actually moves. An imaginary line is drawn around a legally defined area. What they are doing is attempting to create their own bucket. Maybe more like re-label the bucket that’s already theirs, i.e. the East Baton Rouge Parish bucket, as that’s where their taxes currently go.

Of course, if they are successful, there will still be East Baton Rouge Parish bucket, it just won’t be as full.

Annexation, on the other hand, is the transfer of one or more pieces of land from one area to another. Its legal, and has many beneficial uses. However, in this case, the selective annexation of certain areas has a significant impact on the well being of areas that already pay more than their fair share into the bucket.

If St. George Fire loses significant amounts of revenue from this potential annexation, it will still have to deliver services to the same amount of homeowners, because the City of Baton Rouge is just taking some highly selective revenue-generating properties, not the proportionate amount of residences that the money pays for fire protection.

Country Club of Louisiana, Santa Maria, Jefferson Terrace, etc… They could all see negative impacts if the annexation occurs as is.

It’s offensive that even with the City of Baton Rouge’s hand clearly caught in the East Baton Rouge Parish cookie jar, that they would have the gall to go back for seconds.

If Baton Rouge no longer has access to the cookie jar, it will not be the end of the world. It will simply have to go on a diet. It will have to prioritize its spending. Perhaps taxes may have to be raised. It’s not impossible. Maybe if we stopped writing checks to people who donate a little money to certain acronyms here in town we could balance the checkbook.

This debate began as a debate about the need for quality public schools. Its clearly now about retaining power, control, and most importantly, money.

I’ve worked closely with the participants of the Celtic Studios/Costco annexation, and have helped them as much as possible to come into the City of Baton Rouge, as it really makes a great deal of sense that they do so. Half of their property is inside unincorporated East Baton Rouge Parish, and the other half in the City of Baton Rouge.

I reached out to the management of the Mall of Louisiana several months back and let them know that I was here to represent them, and would do my best to facilitate their wishes, whether to stay unincorporated, or come into the City of Baton Rouge. To date, I have received ZERO input from them.

But make no mistake, the game is afoot.

Interested in more news from Louisiana? We've got you covered! See More Louisiana News
Previous Article Ban On Abortion Clinic Staffers Instructing In Schools Passes LA House
Next Article BEAM: The Next Move Is Up To McAllister